The Vatican State is one of the smallest in the world, with an area of less than 440,000 square metres. It is an independent state, under the sovereignty of the Pope, as established by the Lateran Pacts — an agreement be-tween Italy and the Holy See signed on 11th February 1929. Despite its limitations of size, the Vatican City owns a treasury of masterpieces of art and architecture which is unique in the world: in its territory are included the Piazza of Saint Peter and the Basilica itself, the Vatican Palaces, where many of the Museums are housed, a number of Churches, the splendid gardens, the Audi-ence Chamber by Pier Luigi Nervi, a railway station and a helicopter port, and a radio transmitting station. The Vatican city-state, as well as issuing its own stamps, has a mint where it coins its own money; it has its services of law and order and its police system, carried on by the Agenti di Vigilanza, set up in 1816, and the Swiss Guard, a body which has been in ex-istence since 1506; the Guards still wear the multi-coloured uniforms which are said to have been designed for them by Michelangelo himself. 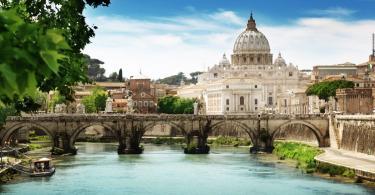