The Palatine Hill was the centre of Rome in two distinct eras: that of the Kings and that of the Emperors. During the Republic, the Patrician families dwelt on the Palatine. Quintus Hortensius, the celebrated orator who emulated Cicero, lived here in a house given him by Augustus. When Augustus became Emperor, he made his imperial residence on the Palatine. Afterwards Tiberius, Caligola, the Flavii and Septimius Severus built palaces here.

The Palatine was the cradle of Rome. Here, according to legend, Romulus traced with a plough the square out-line of the first city; here was the seat of the Kings. Because of this, the hill was chosen as the residence of the Caesars and up to Septimius Severus, no Emperor left it. Only Nero built his Domus Aurea elsewhere but it was never finished nor inhabited by him. The word “Palatino” probably derives from the shepherd god Pales (or Palilia), one of whose followers is supposed to have discovered Romulus and Remus being suckled by the she-wolf. Rome’s official birthday, 21 April, Is still celebrated on the god’s old feast day. From palatino also came the word patazzo (palace), after the large buildings raised on the hill.

Today, this cradle of Rome, through modem excavations, is coming to light again and even its ruins speak eloquently to the visitor’s memory. The most significant buildings are described below. 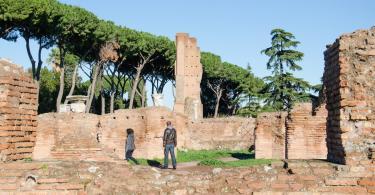 The ruins of the Flavian Palace (Domus Flavia), which was built by the architect Rabirius towards... 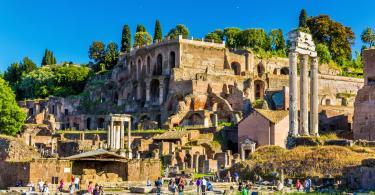 Built on the Palatine Hill by emperor Tiberius, the Domus Tiberiana was the first imperial Roman... 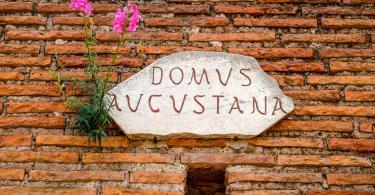 The Domus Augustana consists of a reception wing with an audience hall and basilica, domestic... 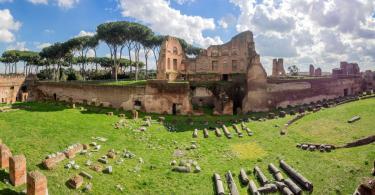 Domitian’s private residence was connected with an enormous garden in the form of a stadium for... 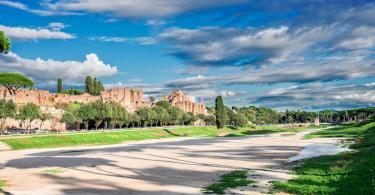 Erected in the valley between the Palatine and Aventine hills, the Circus Maximus (Circo Massimo in...