In the first century BC, Julius Caesar (d. 44 BC) decided to construct a new forum north of the old one.

Four emperors followed his example: first Augustus (27 BC-AD 14), then Vespasian (69-79), Nerva (96-98), and Trajan (98-1 17) each built a forum on one side or the other of the present Via dei Fori Imperiali, striving to outdo one another in magnificence, raising colonnades, libraries, and basilicas – each more sumptuous than their predecessors’, and all in a profusion of marble. In less than a century a new city was born, its wealth reflecting the golden age of imperial Rome.

Trajan produced the most impressive of the forums, and the best preserved today: the Forum Trajanum. Work on the chosen site involved the levelling of a plain and the cutting back of a spur of the Quirinal, all at enormous expense. But Trajan had no need to count the cost: the plunder brought back from his victorious campaigns in Dacia (present-day Romania) financed the entire complex. His market, comprising 150 shops, dominated the forum: the complex was concave in shape and occupied terraces cut into the hillside. 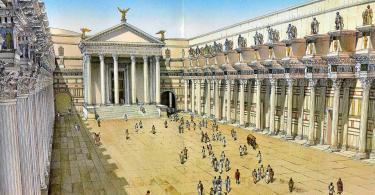 Construction of the Forum of Nerva (which is also known as the Forum Transitorium), was decided by... 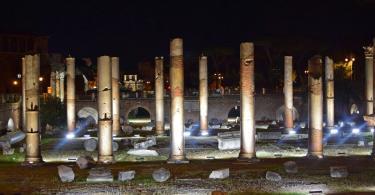 The Basilica Ulpia, which derives its name from Trajan’s family name and served as a court of... 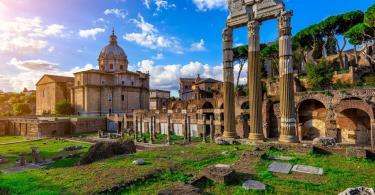 The Forum of Caesar was built with the spoils of his Gallic Wars. On the 9th of August 48 B. C... 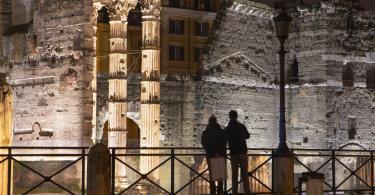 Before the Battle of Philippi in 42 B.C., in which Brutus and Cassius, the murderers of Augustus’... 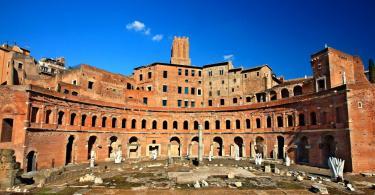 The terraces cut out of the Quirinal hillsides to accommodate the Forum of Trajan were shored up by... 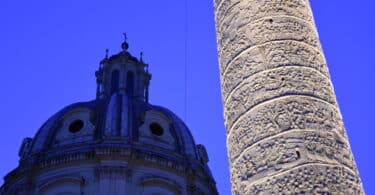 The Trajan’s Column was erected by Trajan between the two libraries in his forum is made up... 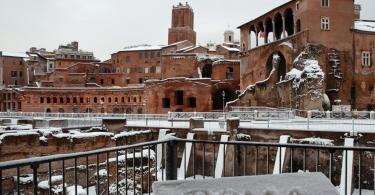 Trajan’s Forum was built by the Emperor Trajan between 107 and 113 AD. It was financed by the...