A trip to Rome is not complete without a visit to the Roman Forum. This is where the fate of Europe was decided for centuries; for a millennium the might of the Roman Empire and the beauty of art, Roman law and ancient religious beliefs were expressed here in an overwhelming style.

This was the political, administrative, and religious centre of Rome in the days of the kings and the Republic. Around the triumphal Via Sacra, where generals paraded after successful campaigns, were ranged the city’s most important monuments: the Forum and the home of the senate – the Curia – as well as a plethora of temples, basilicas, and triumphal arches. In the beginning, however, the locality was hardly hospitable: it was a marsh which also served as a burial ground. In the sixth century BC the Etruscan king Tarquin the Elder (ca. 616- ca. 578 BC) drained the water into the Tiber, and the plain soon became the site of the city’s first forum.

The advent of the Republic witnessed the addition of further buildings, shops, and of course temples: one dedicated to Saturn, another to Castor and Pollux. The forum underwent continual facelifts, notably when it was lined with colonnades in the second century BC. At this time, work began on the Basilica Aemilia and the Basilica Julia, vast roofed structures divided into several ‘naves’ and used to transact all kinds of business. None the less, they could not compensate for the restricted size of the forum or satisfy the requirements of a million or so inhabitants. Activity then began to extend towards the Campus Martius, in the area around the Pantheon, and, a little further north, to the new imperial forums. By depriving it of its essential functions, the emperors were to transform the heart of Rome’s economic power into a stage for their own glorification. They accelerated this change by adding commemorative or religious monuments. Augustus (27 BC-AD 14), Titus (79-81), and Septimius Severus (193-211) raised triumphal arches; Antoninus Pius (138-161), Maxentius (306-312), and Constantine (312-337) built new temples.

Today, an air of desolation broods over the ruin-strewn wasteland that was the Forum Romanum. Here and there emerge the elegant Corinthian columns of the Temple of Castor and Pollux, part of a colonnade, and the series of statues which graced the House of the Vestals (Atrium Vestae). Further off, the arcades of the Basilica of Maxentius and Constantine bear witness to the last flowering of an empire in decline.

The most evocative ruins are the triumphal arches on either side of the Via Sacra. Near the brick building which housed the Curia, that of Septimius Severus (203 AD) is remarkable for its extravagant decoration, while the slender first- century Arch of Titus still seems to be watching over the ‘grandeur that was Rome’.

The most significant buildings are described below. 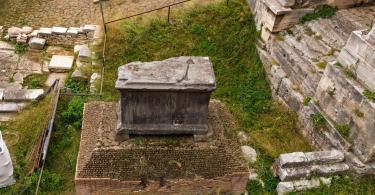 The Lapis Niger, or ‘Black Stone’, a slab of black marble, lies in the Comitium to the... 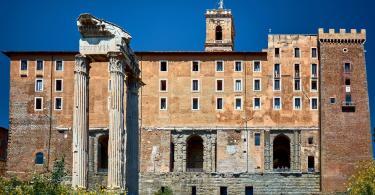 The Tabularium was erected by Q. Lutatius Catulus in 78 B.C. The bronze tablets of laws and decrees... 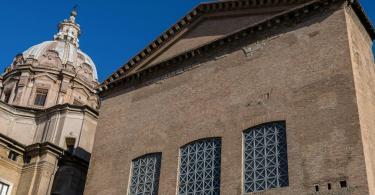 The Curia Julia (Curia Lulia), the Roman Senate’s most ancient meeting-place, probably stood on the... 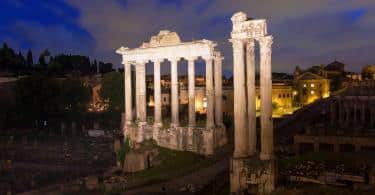 Beyond the Arch of Septimus Severus, this now sorry pile, built to mark the peace between... 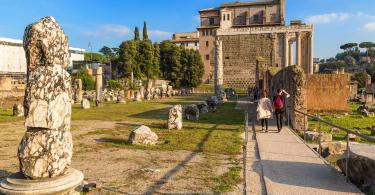 The Basilica Aemilia (Basilica Emilia) was founded in 179 B. C. by Emilius Lepidus and Fulvius... 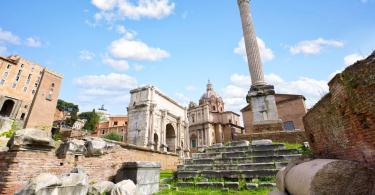 The Column of Phocas is the last classical memory of the Roman Forum. It bases on a stepped brick... 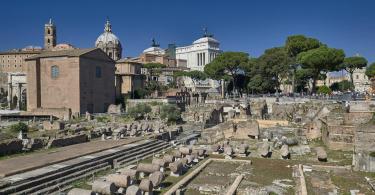 The Basilica Julia consists of the long south side of the Roman Forum and is verged on the west by... 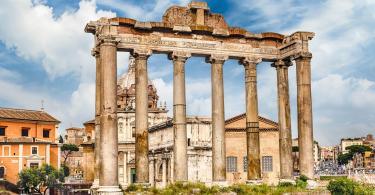 Temple of Saturn was among the earliest temples in Rome and was set up in 497 B.C. on the site, as... 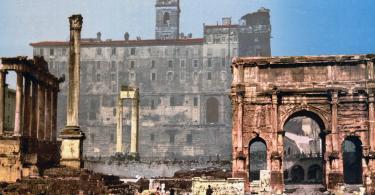 Arch of Septimius Severus has survived its 1.800 years remarkably well. In 203 A.D the Roman Senate... 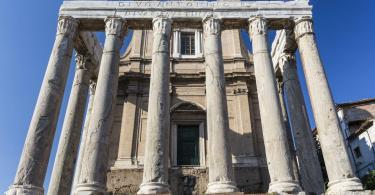 The great temple above which the church of San Lorenzo in Miranda was built in the seventh and... 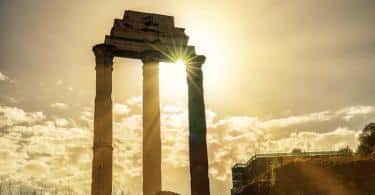 Seeing the square of the Roman Forum to the west of the Arch of Augustus, the Temple of Castor and... 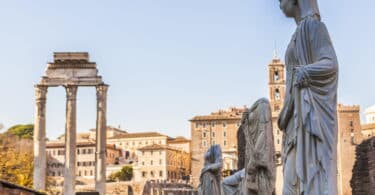 The House of Vestals (the only female priesthood in Ancient Rome), on the south side of the Via...