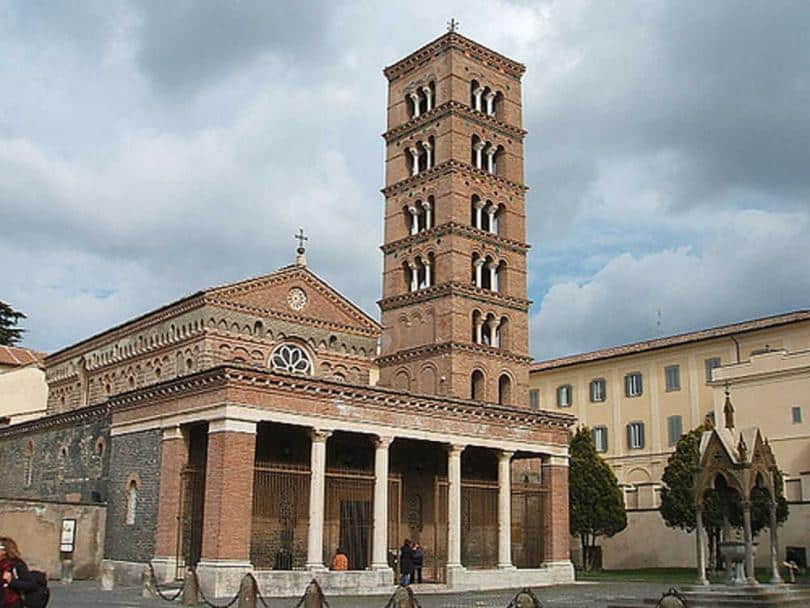 The famous Abbazia is surrounded like a fortress by battlemented walls with large towers and moats; it was built at the end of the 15th cent. by Giuliano da Sangallo or Baccio Pontelli.

The first courtyard leads to the Monastery where there is a museum containing remains of the old church, 15-18th cent. paintings, Byzantine objects and archeological remains from Etuscan and Roman times.

The facade of the church of St. Mary, consecrated in 1025 but com-pletely modified in the mid-18th cent., looks out onto the second courtyard.

A colonnaded portico stands in front of the west entrance with a Byzantine marble doorway and mosaic lunette. To the left is a baptismal font (9-11th cent.). The 12th cent. Romanesque campanile is composed of five orders of three-mullioned windows. The basilica-style interior, with a nave and two aisles, has a Cosmatesque pavement and a coffered ceiling (16th cent.); the triumphal arch is decorated with 13th cent. mosaics depicting the Pentecost, while the upper part of the nave is covered with Byzantine-type frescoes. The chapel of St. Linus contains frescoes by Domenico Zampieri called Domenichino (1581-1614).