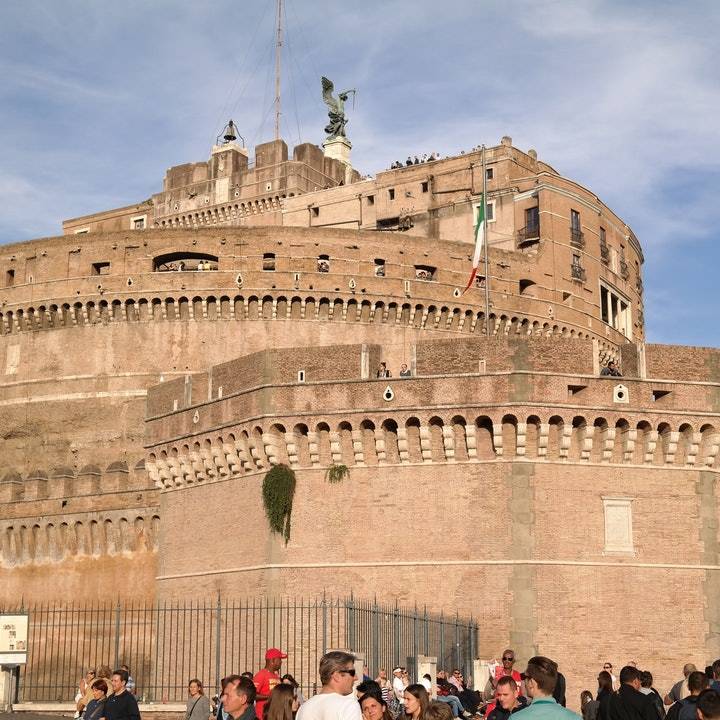 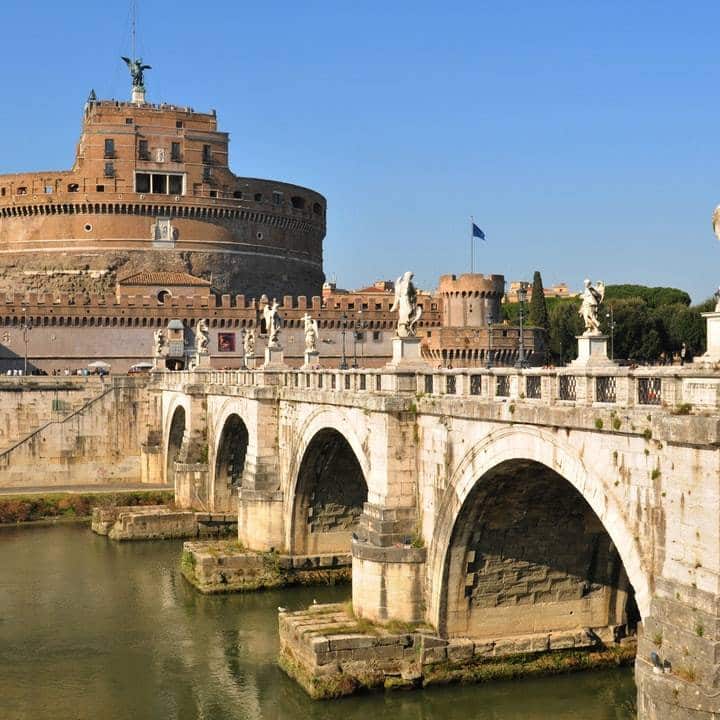 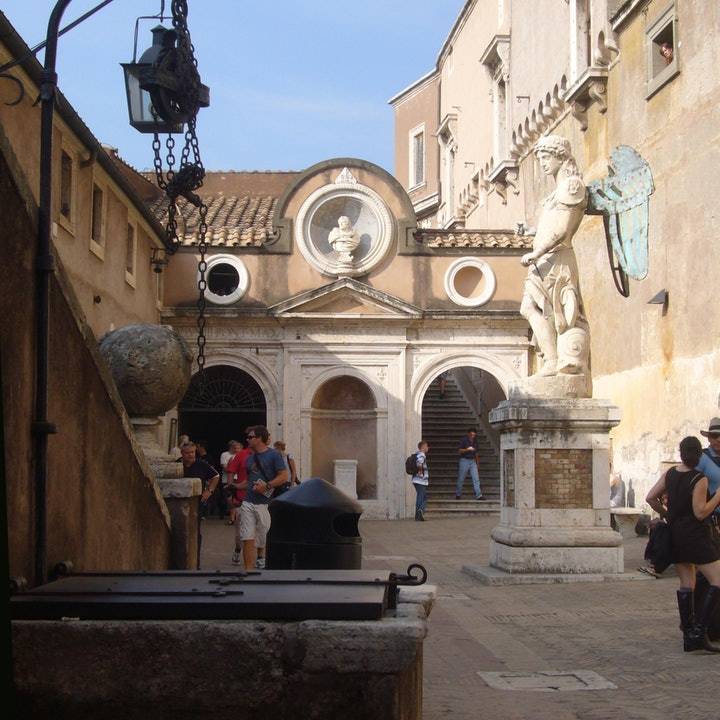 Castel Sant’Angelo, the place of final rest for the old Roman emperor Hadrian, is one of the most mausoleums which were built elaborately – just like Taj Mahal or Pyramids of Giza.

Skip the line with this ticket and start exploring this amazing place right away with your expert guide. Walk through the inner chambers, listen to the stories about old stab-in-the-back events, get mesmerized with amazing frescoes and from the rooftop, enjoy the stunning view of Rome.

Free cancellation up to 3 days before tour starts.

Built in AD 139 as a mausoleum for Emperor Hadrian, this famous Rome landmark subsequently served as a fortress, prison and papal palace.

In 1870 it became a barracks and military prison and was converted into a museum in 1933. The building’s name derives from Pope Gregory the Great’s vision during the plague of 590, when he saw an angel sheathing his sword on the castle’s summit. Taking this as a sign that the plague was over, he built a chapel on the site of the vision and renamed the fortress. The 18th-century bronze Archangel Michael atop the Castel Sant’Angelo is a reminder of these events.

The mausoleum was constructed alongside a pagan necropolis which would later contain the tomb of St Peter and other Christians. Originally it was a marble and travertine-clad drum topped by a tumulus of soil with a gilded statue of Hadrian as a charioteer at its pinnacle.

The drum survives as the core of the present structure. The building consists of three basic interlinked elements: a battlemented exterior with Alexander Vi’s four corner bastions (it was fortified from the time of Aurelian onwards and was a mainstay of Rome’s defences in the Middle Ages); the original tomb at its core; and a square tower, also partly original, above the latter. Other buildings were constructed against and over the tower from the 15th century onwards.

There is much to see spread out over four levels. Entry is via Hadrian’s tomb, and a shallow ramp spirals up to his funerary chamber, the Sala del Tesoro (Treasury). The magnificent marbles with which it was decorated have vanished, though the lid of his sarcophagus survives as a baptismal font in St Peter’s. At the base of the building is the Chamber of the Urns, which housed the imperial ashes placed in the wall recesses. Near by is the 15th-century San Marocco prison where important prisoners (Benvenuto Cellini and Cesare Borgia among them) were held in gruesome conditions.

On the second level lies the Cortile di Onore (Courtyard of Honour) with its piles of cannon-balls, Raffaello da Montelupo’s 16th-century marble angel (originally on top of the castle) and a chapel with a facade designed by Michelangelo. Opening from the courtyard is a warren of corridors and apartments built and decorated for various popes. Look out for Clement VIPs bathroom with its grotesques by Giulio Romano, and the apartments commissioned by Paul III.

These include the Sala di Apollo (Hall of Apollo), decorated by pupils of Perino del Vaga and, in the little room beyond, Luca Signorelli’s Madonna and Saints and a triptych by Taddeo Gaddi. The Sala della Giustizia (Hall of Justice) contains Perino del Vaga’s magnificent Angel of Justice. Also on this level lies the Cortile di Alessandro VI (Courtyard of Alexander VI) with a wellhead carrying the Borgia coat of arms. On the third floor is the Loggia of Paul III, designed by Antonio da Sangallo the Younger, and Bramante’s Loggia for Julius II. Here, too, is the castle’s most splendid room, the Sala Paolina, Paul Ill’s council hall, decorated with frescos by del Vaga mostly representing episodes from the lives of Alexander the Great and St Paul (Pope Paul’s real name was Alessandro – Alexander). There is a representation of Hadrian on the opposite wall. Beyond lies the Sala della Biblioteca (Hall of the Library), decorated in part with scenes from the life of Hadrian.

Discover the history of an ancient citadel, appointed by Emperor Hadrian as a mausoleum. Admire Bernini's pillars in the Vatican City.
Castel Sant'Angelo Skip The Line Ticket
50 Lungotevere Castello 0.05 km

The National Museum of Castel Sant'Angelo inside retraces its background. The castle has various exhibitions ranging from Renaissance paints and pottery to antique military weapons. A signi […]
Colosseum to Trevi Fountain: Segway Tour
50 Lungotevere Castello 0.08 km

3-Hours Historic Tour This tour starts from Castel Sant’Angelo where you will depart to visit one of the most iconic symbols of Christianity in Rome, St. Peters Basilica. Some of the other […]
Tiber River: Hop-on Hop-off Boat Cruise Tickets
Lungotevere Tor di Nona 0.14 km

You are done with that area? Hop on the boat again and sail for the next one – so good! You have the chance to stop by at 5 different locations: Ponte Sant’ Angelo, Isola Tiberina, Castel S […]
Ghost and Mystery of Rome Guided Walking Tour
2 Largo Dei Mutilati Ed Invalidi di Guerra 0.16 km

You'll discover the winding alleys and squares in the city's historical center with a guide, who offers spooky commentary regarding the mythological and historical mysteries that have plagu […]
Tiber River: Pizza Making Class
3 Lungotevere in Sassia 0.32 km

To learn about the history of the marvelous work of arts in the museum and the noble families of Rome who once owned those items, choose audio guidance also. Explore many different masterpi […]
Vatican and Rome: Experience Pass
3 Via di Tor Sanguigna 0.6 km

It is up to you – choose three, five or seven different places in Rome out of 30 to visit and set off! You need guidance? ok – you should have something in your mind that makes you definite […]
12...17