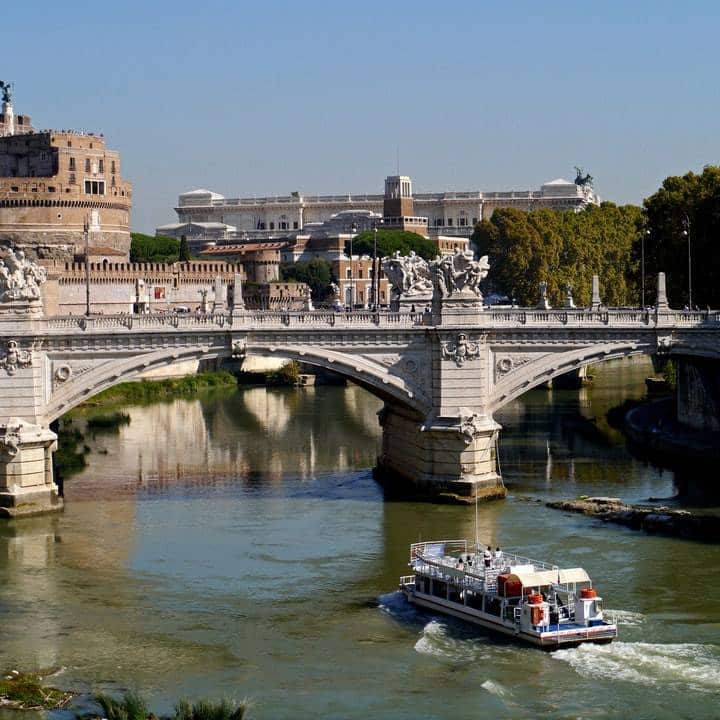 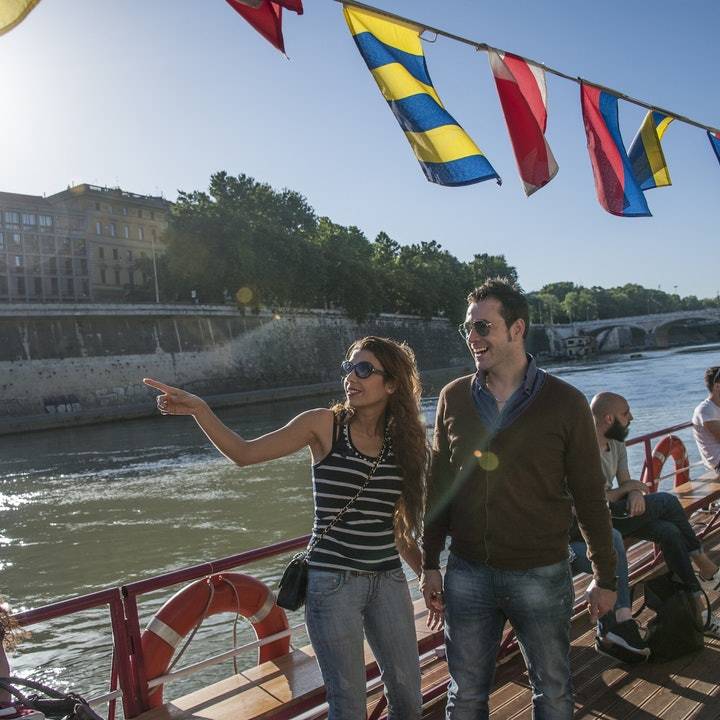 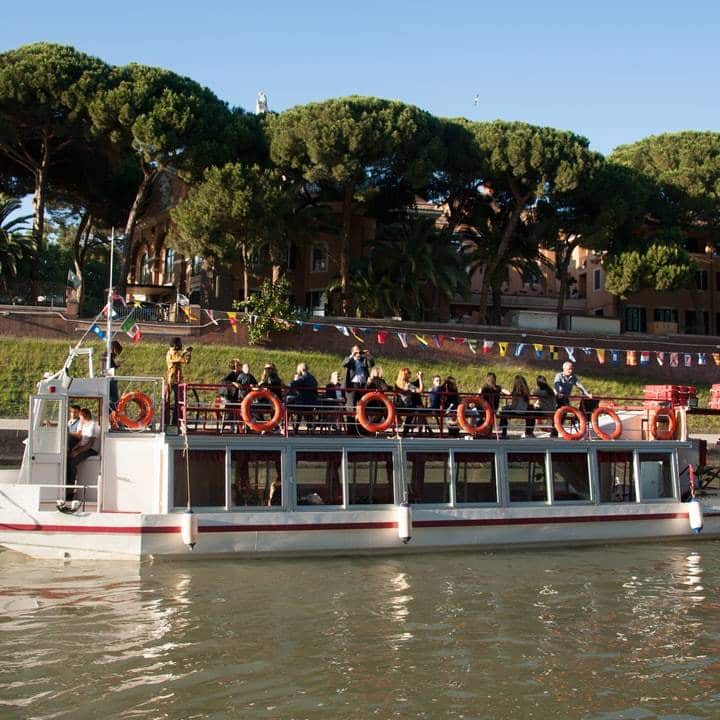 Why not to feel like an emperor when you have the chance? Stop driving and wasting your time in the traffic jam and explore Rome by boat, from the sea. Sail on the Tiber and stop by the next historical area when you wish.

You are done with that area? Hop on the boat again and sail for the next one – so good! You have the chance to stop by at 5 different locations: Ponte Sant’ Angelo, Isola Tiberina, Castel Sant’ Angelo, Piazza del Popolo and lastly, Justice Palace.

You can choose the roundtrip option or 24-hours option to sail and explore Rome by boat – as you wish. Since the boats sail twice each hour, you will not spend time waiting for it. You will feel the history all around Rome while you are exploring various historical locations. While you are sailing, onboard guidance will make you learn three different eras of Rome: Ancient Rome that provided democracy to the world, papal Rome where civilization emerged and modern Rome, the amazing city that you can see today. Having the chance to explore this stunning city from the sea? You can’t miss this!

The Tevere (Tiber) is a muddy uninviting river which in winter and spring rises and falls rapidly inside its steep embankments built at the -end of the last century to put an end to centuries of regular floods within the city walls. Some efforts are being made to encourage boat trips for tourists during the summer. At the time of going to press there is no regular service, although an efficient water bus service would do much to ease traffic congestion along the Lungotevere on both sides of the river.

Ponte Fabricio (also known as the Ponte dei Quattro Capi or Bridge of the Four Heads) connects the city with the Isola Tiberina. It is the second oldest bridge in Rome built in 62 BC. The inscription commemorating the builder Lucius Fabricius has survived almost intact.

Ponte Milvio In the northern suburbs of the city this is the oldest existing bridge across the Tiber dating from 109 bc, but it was partly destroyed by Garibaldi in 1849 to halt the French troops advancing on Rome. It was then restored the following year. Since 1978 the bridge has been closed to motor traffic for safety reasons. On this bridge in ad 312, one of the decisive battles of the ancient world was fought between the Emperors Constantine and Maxentius. Constantine won and became the first Christian Emperor of Rome.

Ponte Cestio connecting the Isola Tiberina to the right-hand bank of the Tevere or Trastevere, was erected in the first century BC by Lucius Cestius. It has been much restored, the last time in 1892.

Ponte Sant Angelo is opposite the Castel S. Angelo and the three central arches are the ancient remains of the Ponte Elia which originally led to Hadrian’s family mausoleum. Pope Clement VII commissioned the statues of SS Peter and Paul in 1535 while the ten statues of angels, one of the finest creations of Roman baroque were designed by Bernini and executed by his pupils in 1668.

Ponte Sisto was built by Pope Sixtus IV in 1474 on the site of a bridge originally built by Marcus Aurelius which collapsed during the Middle Ages. The aim was to relieve the growing pressure on pilgrim traffic across the Tiber to the Vatican during Holy Years.

3-Hours Historic Tour This tour starts from Castel Sant’Angelo where you will depart to visit one of the most iconic symbols of Christianity in Rome, St. Peters Basilica. Some of the other […]
Ghost and Mystery of Rome Guided Walking Tour
2 Largo Dei Mutilati Ed Invalidi di Guerra 0.12 km

You'll discover the winding alleys and squares in the city's historical center with a guide, who offers spooky commentary regarding the mythological and historical mysteries that have plagu […]
Castel Sant'Angelo Guided Tour
50 Lungotevere Castello 0.14 km

Skip the line with this ticket and start exploring this amazing place right away with your expert guide. Walk through the inner chambers, listen to the stories about old stab-in-the-back ev […]
Castel Sant’ Angelo and St. Peter’s Square Guided Tour
50 Lungotevere Castello 0.18 km

Discover the history of an ancient citadel, appointed by Emperor Hadrian as a mausoleum. Admire Bernini's pillars in the Vatican City.
Castel Sant'Angelo Skip The Line Ticket
50 Lungotevere Castello 0.18 km

The National Museum of Castel Sant'Angelo inside retraces its background. The castle has various exhibitions ranging from Renaissance paints and pottery to antique military weapons. A signi […]
Tiber River: Pizza Making Class
3 Lungotevere in Sassia 0.39 km

To learn about the history of the marvelous work of arts in the museum and the noble families of Rome who once owned those items, choose audio guidance also. Explore many different masterpi […]
Vatican and Rome: Experience Pass
3 Via di Tor Sanguigna 0.47 km

It is up to you – choose three, five or seven different places in Rome out of 30 to visit and set off! You need guidance? ok – you should have something in your mind that makes you definite […]
Leonardo Da Vinci Exhibition Ticket
19 Via della Conciliazione 0.5 km

You will have multiple options at different stunning places that host opera concerts – St. Paul’s Within the Walls offers Bach and Vivaldi, the Romanc archaeological site Navona Underground […]
12...17