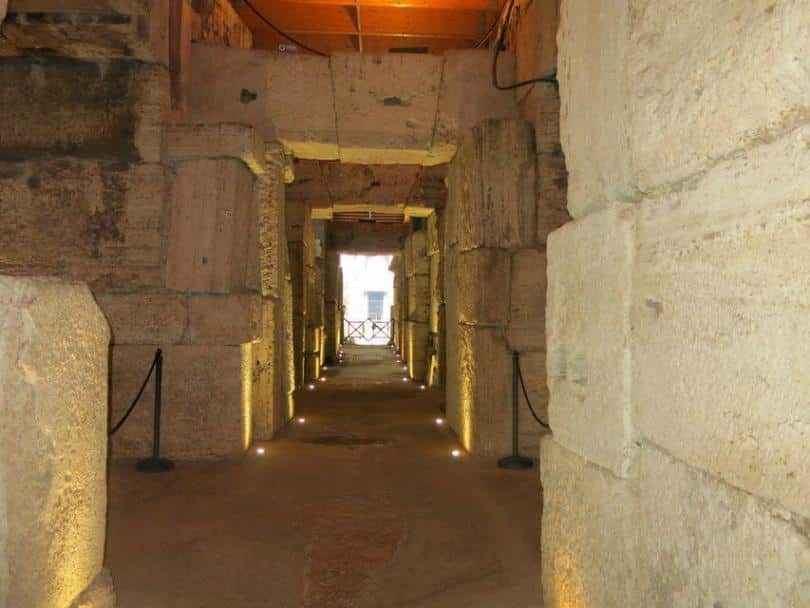 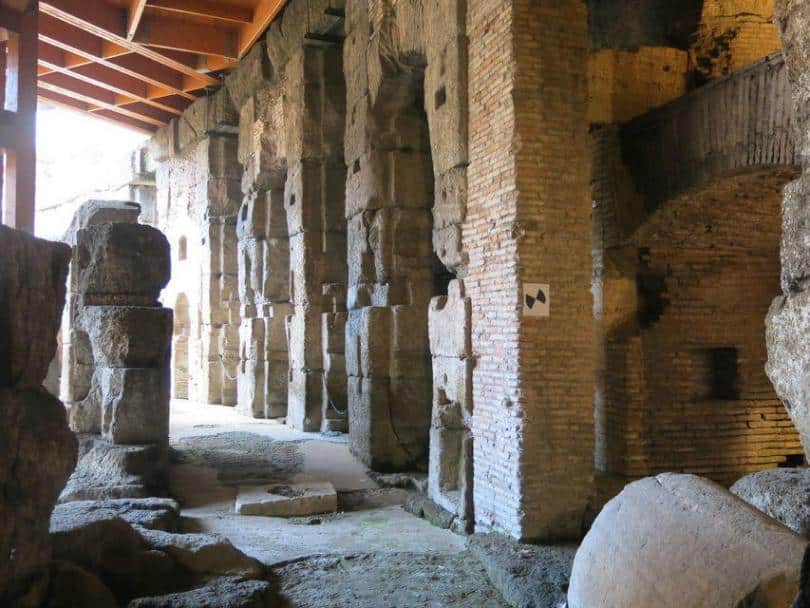 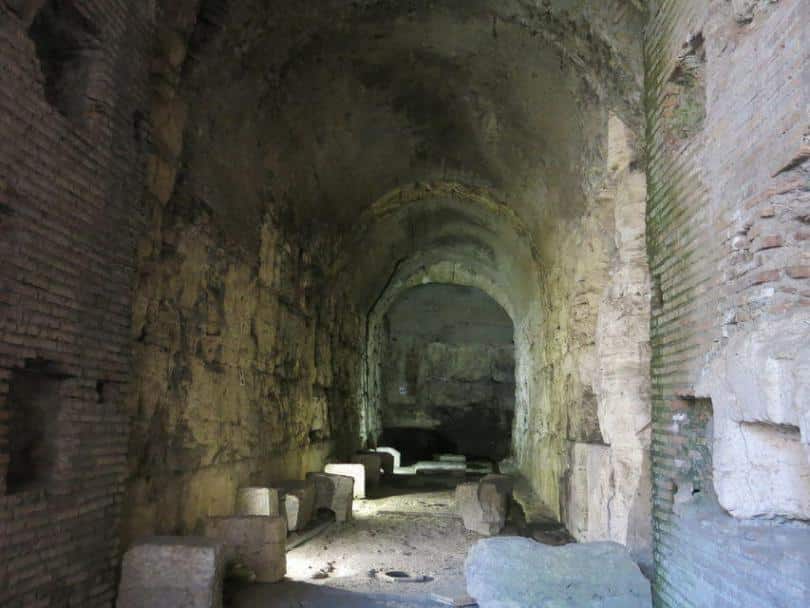 An English-speaking guide will meet you at the Arch of Constantine and then you will skip the line and access the Colosseum with your guide.

This amazing building, which is also classified by UNESCO as a World Heritage Site, is the biggest and the most well-preserved amphitheaters from ancient Rome. Do you know that the building was able to host 75.000 people? Amazing! This iconic building is also in the New 7 Wonders of the World list. Enjoy your exclusive tour and head towards one of the normally restricted areas of the Colosseum: The Underground Cistern.

Underground: Narrow hallways, narrow tunnels and complex mechanisms are waiting to be discovered! Be ready to witness the mastership of the people in ancient Rome while you are walking towards this underground cistern. This cistern was the heart of ancient Rome beating – amazing stage effects were created by slaves, wild animals were prepared for battles, gladiators waited for their glory moment or death before going into the arena and on the ground level, there was a show for the audience.
Listen to your guide while exploring this area, since your guide will tell you real and impressive facts about this place. Your next stop will be the ground level of the Colosseum.

Arena: Extreme and bloody battles between gladiators or gladiators and wild animals took place on this ground, which were offerings to the Romans by the emperors. Imagine yourself as a Roman people watching this shocking show while your guide is explaining all the details about the show, its preparation and why these shows were important. Additionally, real stories and some secrets about famous characters of the ancient Rome will also be shared with you by your guide. As the last phase, go towards the tier surrounding the subterranean levels of the Colosseum and your guide will bring you to the cross dominating the Colosseum – do you know that the Pope himself visits this Christian pilgrimage symbol on Good Friday? Are you ready for your next stops? They are Palatine Hill and Roman Forum.

Roman Forum and Palatine Hill: Arch of Constantine that was built in 4th century and that symbolizes the moment when Christianity was decided as the official religion of the empire by the Emperor Constantine will be waiting for you outside the Colosseum. Visit the Roman Forum, which was the political and social center of the Rome and then the Palatine Hill, the origin of the empire. Listen to your guide and hear stories and facts about the daily life of Roman people, empire’s politics and the most interesting one, Romulus and Remus brothers, founders of the city of Rome.

With your professional guide, discover the most well-known amphitheater in the world and inside the Colosseum, feel like you are living in the Roman Empire era. As an exclusive guest, enjoy […]
Colosseum + Underground: 3.5-Hour Professional Guided Tour
Piazza del Arco di Costantino 0.05 km

Prior to walking into the Flavian Amphitheatre, your tour guide will be waiting for you at the Colosseo Metro Station. You will be guided in such a way that you will feel the aura of the sp […]
Ancient Rome Tour with Colosseum Underground
58 Piazza del Colosseo 0.05 km

Get exclusive access to limited locations and examine the workings of the Colosseum beneath the arena floor! Avoid the lines to the main monuments of Ancient Rome on a small group guided tr […]
Colosseum Underground and Arena Floor Guided Tour
5.01
58 Piazza del Colosseo 0.06 km

Discover life in the Eternal City of the Roman Empire, and get awesome views of the Circus Maximus. See the main monuments of Roman Empire on a 3-hour guided trip, with skip-the-line access […]
Skip-the-Line: Colosseum with Underground Tour
5.01
Via Sacra 0.09 km

Subterranean tunnels and chambers will welcome you and after, you will head towards the Palatine Hill and Roman Forum, with your professional guide.Incline your ears to your guide while he […]
Colosseum Belvedere: Guided Tour
5.01
1 Piazza del Colosseo 0.11 km

Discover the Colosseum and also absorb those sights of the arena floor, when 60.000 toga-clad Roman people when was seated, stood up and also roared. Learn more about the gladiatorial right […]
Ancient Rome and Colosseum Family Tour
1 Piazza del Colosseo 0.11 km

Walk on the same ground with emperors and reach Colosseum, the mighty place where reckless gladiators fought with wild animals. Don’t wait in the line to reach the astonishing arena and enj […]
Colosseum and Ancient Rome Walking Tour
1 Piazza del Colosseo 0.13 km

The tour is led by professional guides who will explain the history of Rome and present you to some of the most infamous Roman emperors. Included with your fortunate priorty entryway to the […]
Ancient Rome: Tickets + Guided Tour (English-Spanish, French, German or Russian)
Via Sacra 0.15 km