You’ll have access to Colosseum with skip-the-line tickets and discover forbidden areas for the general public with your English-Speaking professional tour guide and learn the secrets of this ancient landmark of Rome.

Visit the Colosseum, Roman Forum and Palatine Hill on a guided tour of all three attractions. Learn all about everyday Roman life, the Colosseum’s gory history, and the city’s rumored founding hill.

After entering the Colosseum, walk around the amphitheater as your guide brings history to life. Stand in the once off-limits arena floor and imagine the roaring crowds from the gladiators’ perspective.

Next up, visit the Roman Forum which was full of grand, classical architecture and a marketplace. It was the epicenter of Roman political, religious, and social life and was home to the Temple of Julius Caesar and Roman Senate.

Finally, walk up to Palatine Hill, the reputed birthplace of Rome and the centermost of the Seven Hills of Rome. From the hill, enjoy the panoramic scenery of Rome, including exceptional views over the Roman Forum and Colosseum.

The Colosseum (Flavian Amphitheater) remains the most memorable monument surviving from ancient Rome. Its construction began in 72 AD by Vespasian on the site of the Stagnum Neronis, an artificial lake built by Emperor Nero near his house on the adjacent Oppian Hill for his pleasure.

The Colosseum was eventually dedicated by Titus in 80 AD. It is recorded that at the building’s opening ceremony, which lasted three months, over 500 exotic beasts and many hundreds of gladiators were slain in the arena. These types of spectacles lasted until 405 AD when they were abolished. The building was severely damaged by an earthquake in the fifth century AD and since then it has been used as a fortress and as a supply source for construction material for Vatican buildings.

What we see today is nothing compared to what the building used to look like. In its prime, it was covered with marble, and each portico was filled with a marble statue of some important Roman.

The Colosseum used to be fully elliptical and could hold over 50,000 people. Each of the three tiers is supported by a different set of columns: Doric for the base, Ionic for the middle, and Corinthian for the top. Inside, the first tier of seats was reserved for the knights and tribunes, the second tier for citizens, and the third tier for the lower classes. The Emperor, Senators, Government Officials and Vestal Virgins sat on marble thrones on a raised platform that went around the entire arena.

Inside the arena, we can see vestiges of the subterranean passages that were used to transport the wild beasts. Human-powered elevators were employed to get the animals up to the Colosseum floor. At times the arena was flooded to allow for the performance of mock naval battles. Unremarkable architecturally, the Colosseum is still an engineering marvel to admire. A great site for kids to explore. 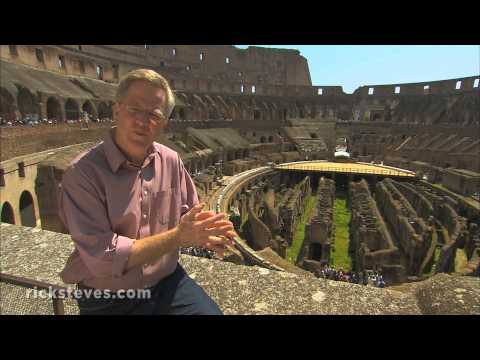 Reviews
5 stars
100%
4 stars
0%
3 stars
0%
2 stars
0%
1 star
0%
Showing 1 - 1 of 1
arena currently open to visitors?
5.0
Erik
·
June 7, 2021
Is the arena currently open to visitors? I'm planning to take the underground tour but I can replace it with the arena tour. thanks.
Nearby Activities
Colosseum Priority Entrance with Audio-Video Guide, Roman Forum and Palatine Hill
1 Piazza del Colosseo 0.02 km

This three-in-one ticket is the very best method to get into the spirit of the magnificent Roman Empire. Switch your digital coupon for an audio guide and a printed ticket total with timesl […]
Colosseum Priority Entrance + Roman Forum & Palatine Hill
1 Piazza del Colosseo 0.02 km

Enter into the Colosseum, Palatine Hill, and Roman Forum in main Rome through the fast track entryway with a combined package. Take pleasure in a problem-free experience at your own pace. M […]
Colosseum Underground Tour with Arena and Roman Forum
41.891972, 12.490689 0.04 km

Thanks to this tour, you will visit the lands that once gladiators used to fight between each other and wild animals. In addition to this, you can visit the underground of Colosseum where y […]
Comprehensive Colosseum, Roman Forum and Palatine Hill Tour
41.889770, 12.490602 0.04 km

You will be visiting Palatine Hill, Roman Forum and Colosseum with this walking tour and learn every secret of one of the mightiest empires in the world. Participants will not have to wait […]
Colosseum Last Minute Tickets
1 Piazza del Colosseo 0.04 km

If you value your time in Rome, this exclusive entrance ticket is simply the one that you need to reach the best experience. With this ticket, you will be able to explore 2nd and 3rd floors […]
Skip the Line: Colosseum, Roman Forum and Palatine Hill Package
1 Piazza del Colosseo 0.04 km

Skip the lengthy queue for the entry-ticket line and go straight to the fast lane entry for safety and security checks. After going into the Roman Colosseum at your assigned time, experienc […]
Colosseum Arena, Roman Forum and Piazza Navona Private Tour
1 Piazza del Colosseo 0.08 km

You will certainly begin with the Roman Colosseum, the monument that was used for public shows and gladiatorial combat. Then you will certainly visit the Foro Romano (Roman Forum), site of […]
Popular
Colosseum Priority Entrance + Arena Floor, Roman Forum and Palatine Hill
1 Piazza del Colosseo 0.08 km

Built in the middle of the broad valley between the Palatine, the Esquiline and the Caelian hills, the largest of the monuments of ancient Rome became quickly and inevitably the "Colossus" […]
Ancient Rome and Colosseum Family Tour
1 Piazza del Colosseo 0.08 km

Walk on the same ground with emperors and reach Colosseum, the mighty place where reckless gladiators fought with wild animals. Don’t wait in the line to reach the astonishing arena and enj […]
Full-Day Tour: Colosseum, Roman Forum and Vatican City

Your guide will inform you everything about this world's biggest amphitheater including the gladiator traditions and fights. You will also have a chance to learn more about the complex Roma […]
12...17