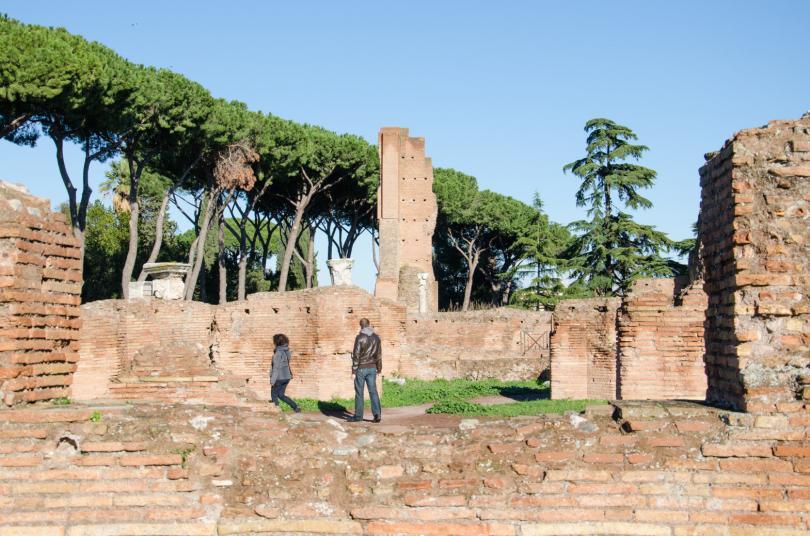 The ruins of the Flavian Palace (Domus Flavia), which was built by the architect Rabirius towards the end of the 1st century by order of Emperor Domitian of the Flavian dynasty, is at the centre of the Palatine hill. 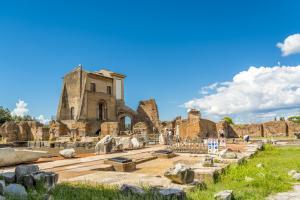 This was the centre of power in the Roman Empire during imperial times. The great palace, inaugurated in 92 AD, had two entrances, one to the state rooms (the Domus Flavia) and one to the private apartments (the Domus Augustana). 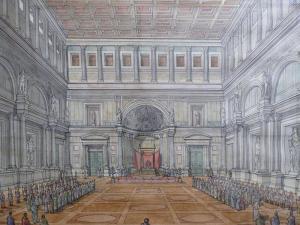 The official part of the building was laid out around a large porticoed court with various reception rooms ranged round it. In particular a splendid state room, called the Aula Regia, decorated with niches set between columns, served as the audience chamber. Here the throne was placed in the middle of an apse (a semicircular wall forming a recess). At the side of the throne room there was a basilica, its interior divided in three by two rows of columns, and a building (the lurarium) where the images of members of the royal family were placed after their deaths. 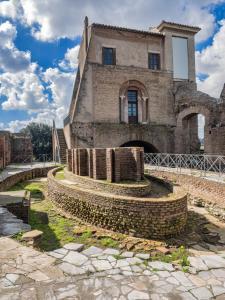 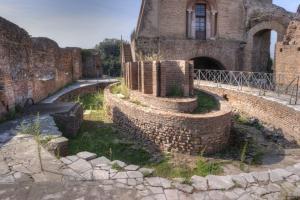 One of the nymphaeums of the Flavian Palace (Domus Flavia.)

On the opposite side of the courtyard stood the great triclinium or banqueting hall flanked by two smaller rooms at the centre of which were two oval fountains (nymphaeums). The playing of the waters could be admired by the banqueters through the great windows between the triclinium and the side chambers. Hadrian installed a heating system in the banqueting hall so that it could be used in winter. The marble pavement still visible was part of restoration work under Maxentius. 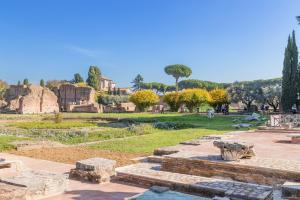 The ruins of the inner courtyard of the Flavian Palace (Domus Flavia, I c. AD). The octagonal fountain. 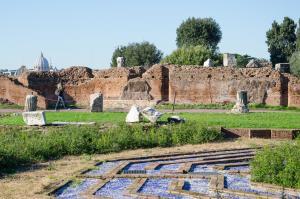 Tourists visiting the ruins of the Flavian Palace at the Palatine in Rome. The Domus Flavia was the palace of the emperors of the ancient Rome after Domitian

Domitian’s palace aroused the admiration of his contemporaries by its splendour and the immense size of the lofty chambers, probably decorated with marble and richly furnished. The grandeur of the architecture and the natural setting of the palace created the impression that it was truly the dwelling of a dominus et deus, a god ruling over the earth.

The Emperor Domitian so feared his own death that he had the interior of his palace, the Domus Flavia, lined with slabs of reflective mica to reveal potential assassins creeping up behind him. In the end it was to no avail—he was stabbed to death in the portico.

Flavian Palace set in the Palatine Hill, 0,95 km from (12 min walk) from Colosseum.