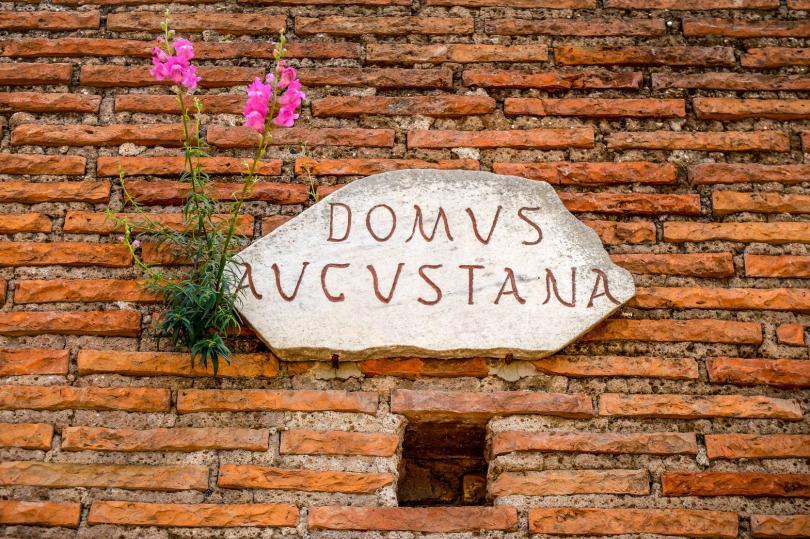 The Domus Augustana consists of a reception wing with an audience hall and basilica, domestic quarters, a great stadium or hippodrome, and a Bath of the imperial palace of Domitian (Augustana = imperial). It was the private residence of the emperor, ‘the Augustus’, not that of Emperor Augustus.

Even today, the magnificence of the monumental but harmonious design is impressive. Like the Flavian Palace, it was erected in the reign of Domitian (in 85 A.D.), and initially served as the imperial residential palace; later, until the Byzantine period, it was also the residence and workplace of the highest officials. It was a magnificent establishment adorned with the richest marbles and filled with fountains (especially the oval fountain which was designed to be seen from the palace’s dining hall), statues, sunken gardens, temples, and decorated apartments. 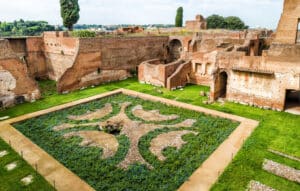 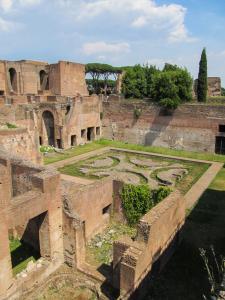 Garden of Domus Augustana in the Palatine Hill, Rome – Italy 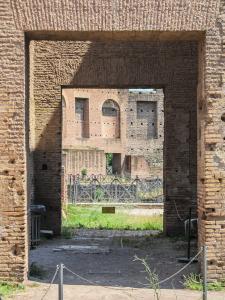 Brick doorways at Domus Augustana in the Palatine Hill

The private wing of the Palace of Domitian was built on two levels to contain the slope of the Palatine Hill. Its curving facade with the main entrance facing the Circus Maximus.

On entering from this side, one passed through the outer chambers and came to an inner court surrounded by columns (called a peristyle). This was largely occupied by a monumental fountain decorated with a pattern formed by four peltae, shields shaped like half-moons legendarily used by the Amazons. 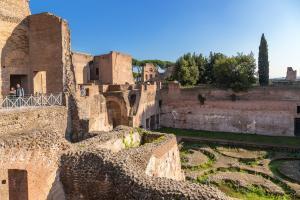 Lower peristyle with fountain of Augusti Palace (Domus Augustana, the end of I cent. AD), the personal chambers of the Emperor 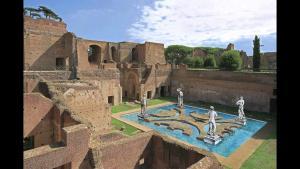 Round this courtyard were ranged symmetrically the rooms of the house of Domitian, set on two floors and with vaulted ceilings. A staircase led to the upper floor, the official residence, where a second peristyle was decorated with a large pool with a little island in the middle, on which stood a temple, perhaps to Minerva. The emperor probably only occupied the rooms on the upper floor, recognizable by their complex layout and small size. 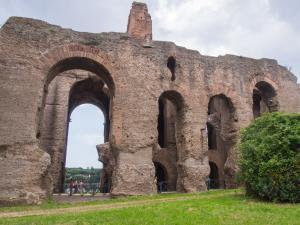 Domus Augustana is the first major site upon entering Palatine Hill in Rome, Italy. It served as the primary residence of Caesar Augustus during his reign. 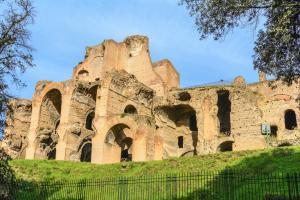 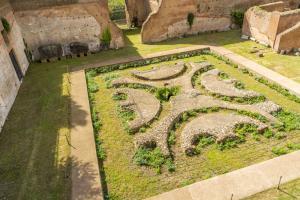 Gardens of the Domus Augustiana on the Palatine

Beside the palaces, Domitian built the Hippodrome of Domitian, some of the Palatine’s most extensive ruins—whether as a sunken garden or as a stadium for his personal entertainment is unknown.
It may have been here that the attempted martyrdom of St. Sebastian took place.

Domus Augustana is set in the Palatine Hill, 0,45 km from (6 min walk) from Colosseum.