Once upon a time, in ancient Rome, thermal baths and facilities were here instead of these ruins. It was all about relaxation and refreshing when an ancient Roman came here.

Ancient Roman people were coming this place to socialize, to get fit, to discuss politics with others and even to gossip.

Imagine that you are an ancient Roman in the ancient Rome times and making use of every bit of this large facility founded in the first years of 3rd century – or maybe it can be a battle against Goths to defend this complex, use your imagination!

Baths of Diocletian is the biggest public baths in Rome were built between ad 298-306 and could hold 3000 bathers – about twice the capacity of the Terme di Caracalla.

The ground plan was roughly the same – a walled outer perimeter enclosing gardens, exercise rooms and hot and cold pools. The tepidarium was converted by Michelangelo into the Church of S. Maria degli Angeli in 1566.

The remains of the calidarium now form the external facade of the church. Most of the remains of the terme are now occupied by the Museo Nazionale delle Terme (National Museum; one of the most important collections in the world of ancient sculpture, painting and mosaics, and sarcophagi). The setting is very appropriate as it was the custom in the ancient world to decorate public baths with works of art. 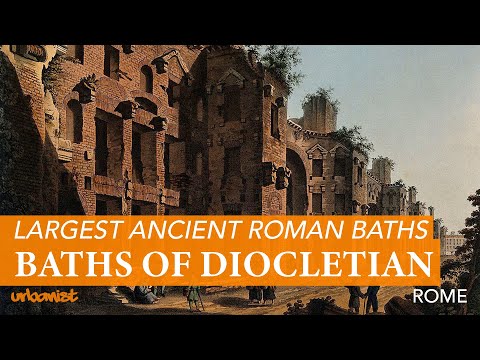 See the sights of Rome at your own speed on board an open-top hop-on and hop-off sightseeing bus. Gain access to 2 loops in the historical city center to visit sites such as the Spanish Ste […]
Capri from Rome: Full-Day Tour
10 Piazza della Repubblica 0.25 km

You will hit the road from southern Rome and arrive in Naples. From here you will reach the port but before it, you will have enough time to enjoy the panoramic tour. It takes 45 minutes to […]
Palazzo Massimo Tickets
2 Largo di Villa Peretti 0.29 km

The collection at Palazzo Massimo is like a gate to see the ancient Rome and it has been created by the National Museum of Rome studiously. Visit this place from Renaissance era to explore […]
Roma Pass: 48 Hours & 72 Hours
10 Piazza della Repubblica 0.31 km

Save cash with extra discount rates for other must-see museums and great sites and Ride all of Rome's public transport for free.
City Sightseeing: Hop-on Hop-off Bus Rome

You can enjoy comfortable and cozy design of the bus and with audio-guide, you can learn about the history surrounding you. See many historical and touristic places like the Colosseum or th […]
Milan from Rome: Full-Day Tour by Train
1 Piazza dei Cinquecento 0.33 km

Cathedral and famous square, Church of San Gottardo and Cathedral Museum are some of the destinations you are going to visit during the tour. You will also witness the rich art and architec […]
From Rome: Day Trip to Venice
1 Piazza dei Cinquecento 0.33 km

You will be also given a ferry pass that is valid for 12 hours for free public transportation during your visit to Venice. Your tour guide will be with you until you depart to Venice and ha […]
Direct Bus Transfer: Fiumicino Airport - Rome Termini
1 Piazza dei Cinquecento 0.34 km

You do not have to pay any fee for luggage and booking too! All direct transfers are carried out with air-conditioned and comfortable buses. You can find your direct transfer bus depot outs […]
12...17