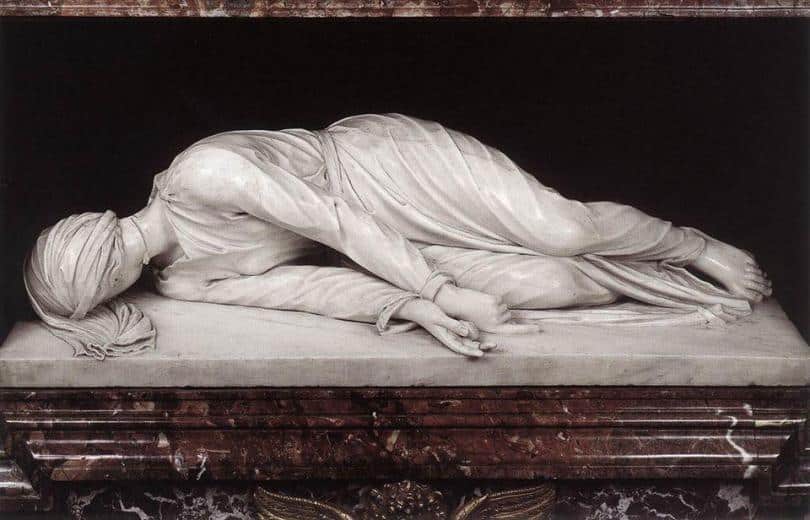 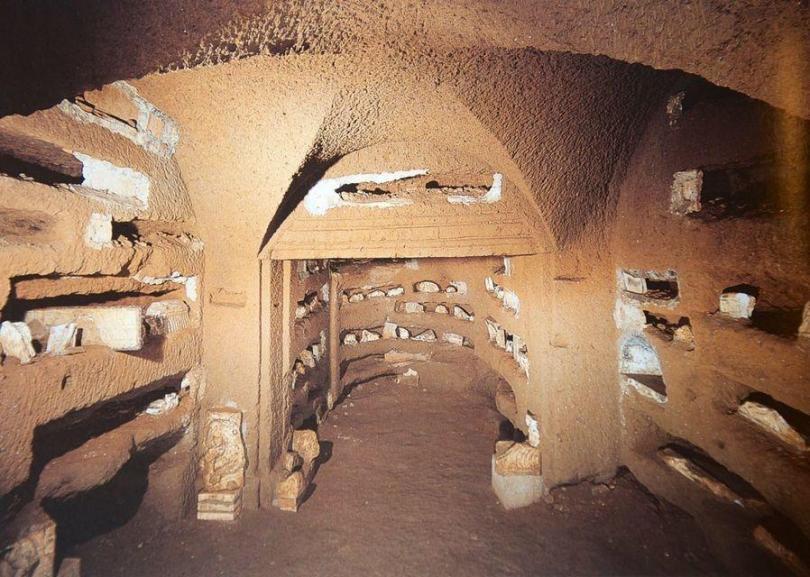 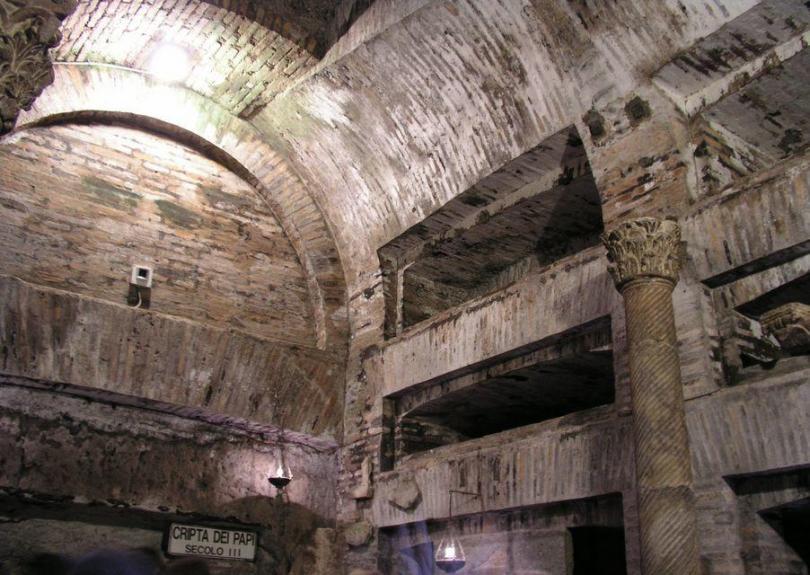 This two-hour trip offers you the chance to explore the mysterious, underground Catacombs of St. Callixtus with your expert guide. The catacombs are 19 centuries old, have galleries on 4 levels underground, and occupy 90 acres.

The catacombs are eternal homes of many martyrs, 16 popes, and several Roman Christians.
The little Vatican, family tombs, the Crypt of St. Cecilia – explore more than these three with your guided tour. Look at the frescoes, which are 18 centuries old and represent the religious ceremonies of the Eucharist and Baptism.

About one and a half Kilometres along the Appian Way are the Catacombs of St. Calixtus. Like many others in Rome and its surroundings, these Catacombs were a place of refuge for the early Christians.

The rise of Christianity was not uncontested; on the contrary, it was opposed because it was considered a force hostile to the state, damaging to the institutions and to the very security of the empire. This is understandable when one considers that a religious movement of this kind, which preached the equality of all and respect for the human personality, must certainly have been inconvenient to the rulers and men in the government. It must not be forgotten that in Roman society, as in all the preceding civilizations, slavery was practiced, and that in any case, neither servants nor foreigners enjoyed the same rights as Roman citizens.

For this reason, all followers of the new religion, in its early years and for some centuries after, had to hide, practicing their rites in secret and meeting in secret. This was the origin of the catacombs, a series of corridors, warrens, rooms, and underground sepulchers, which for centuries were the refuge of the Christians as well as their early, marvelous church. Indeed, with the years, underneath the pagan Rome, monumental, solemn, and majestic, a second Rome gradually coming into existence a Christian Rome, poor and humble, enveloped in darkness and mysticism. These two cities, one above the other, swarmed with life, but in each of them, there was a completely different life and civilization.

The Catacombs of St. Calixtus are undoubtedly the most important at Rome; they are called after the Deacon Calixtus, who enlarged the labyrinth of galleries and crypts already in existence, making them the abode and cemetery of the Christians and Popes of the time.

Without listing in detail the remains to be found here, it need only be said that most of the tombs are those of 3rd-century popes and that there are crypts of great artistic value owing to the ancient frescoes which are still in excellent condition.

Changes are not possible for this tour.

With the shuttle bus leaving from the meeting point that will be shared with you, go to the Catacombs of St. Callixtus and meet your expert guide to start your tour through the ancient tunn […]
Bike Tour: Ancient Appian Way, Aqueducts and Christian Catacombs
40 Via Appia Antica 0.99 km

You will have the chance to see the ancient tombs and remains of an Imperial Palace. On your way, listen to your guide because he will tell all interesting facts and historical cases about […]
Gladiator School of Rome: Gladiator Training
18 Via Appia Antica 1.28 km

Found on the Appian Way, nearby the Colosseum, this course is a special and interactive method to learn about ancient Roman history, activities, and society. Your friends and family members […]
Gladiator Museum Tickets
18 Via Appia Antica 1.28 km

With an audio guideline, you can explore all 25 hectares of what's now the best-preserved ancient bathing area in the city. Imagine the tinted marble, repainted stuccos, mosaics, glass and […]
Centrale Montemartini Tickets
106 Via Ostiense 2.63 km

Throughout rebuilding of the Capitoline Museums in 1997, old Greek and Roman statues were transferred to the Centrale Montemartini for short-term exhibit. The exhibit of gods and devices wa […]
Basilica of St. Paul Outside the Walls Audio Guide
1 Piazzale San Paolo 2.66 km

Discover the remarkable background of St. Paul's Basilica outside the walls and choose from 2 audio guides: focus on the church itself, or go luxurious and find out about (and see) the Cloi […]
Christian Rome with Underground Basilicas 3-Hour Guided Tour
4 Piazza di S. Giovanni in Laterano 2.73 km

Delight in a half-day strolling tour of Christian Rome and explore underground treasury in a few of the most astonishing churches. Your tour guide will certainly inform you remarkable reali […]
Private Tour for St. John Lateran, Holy Stairs, and Baptistery
42 Via Locri 2.74 km

You will also have a chance to admire the central nave and amazing sculptures together with a ceiling that was decorated by Borromini in the 16th century. After this, you are going to enter […]
Half-Day Tour: Catacombs of Rome with Main Basilicas
4 Piazza di S. Giovanni in Laterano 2.8 km

Next one is St. Mary Major Basilica where you can see stunning collections of handmade and historical objects. You will be amazed by the Crypt of the Nativity and the mosaics. The next stop […]
12...17