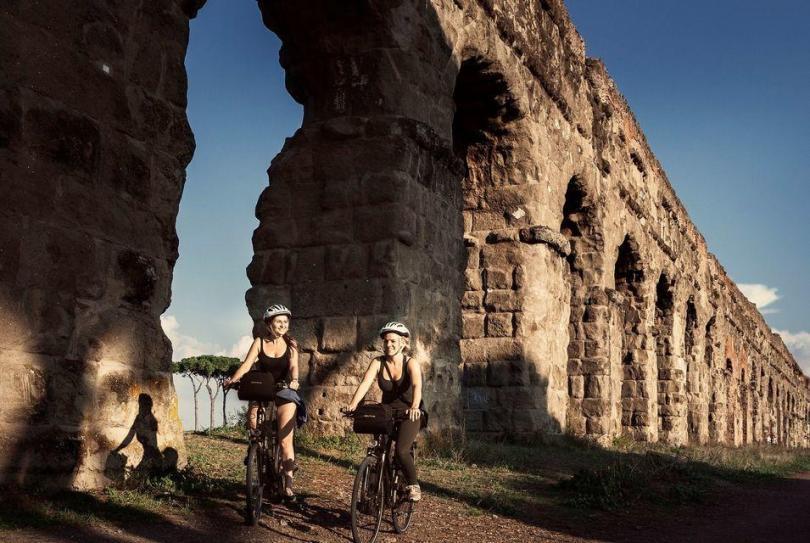 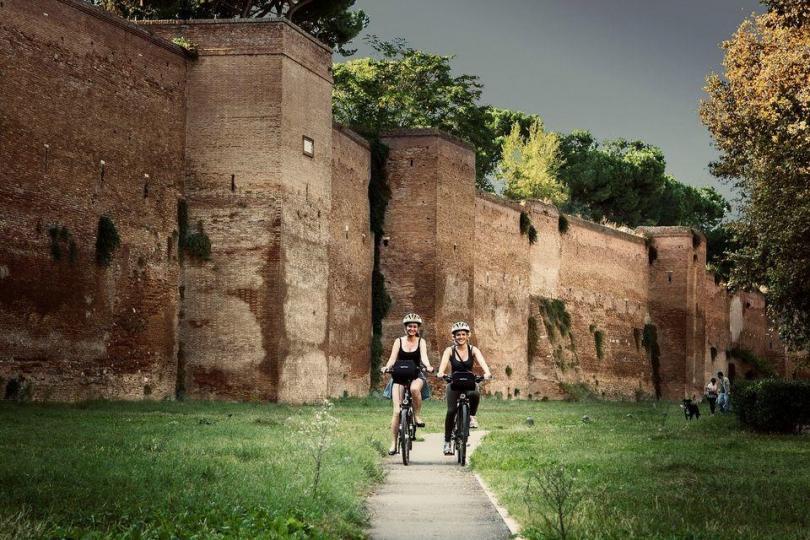 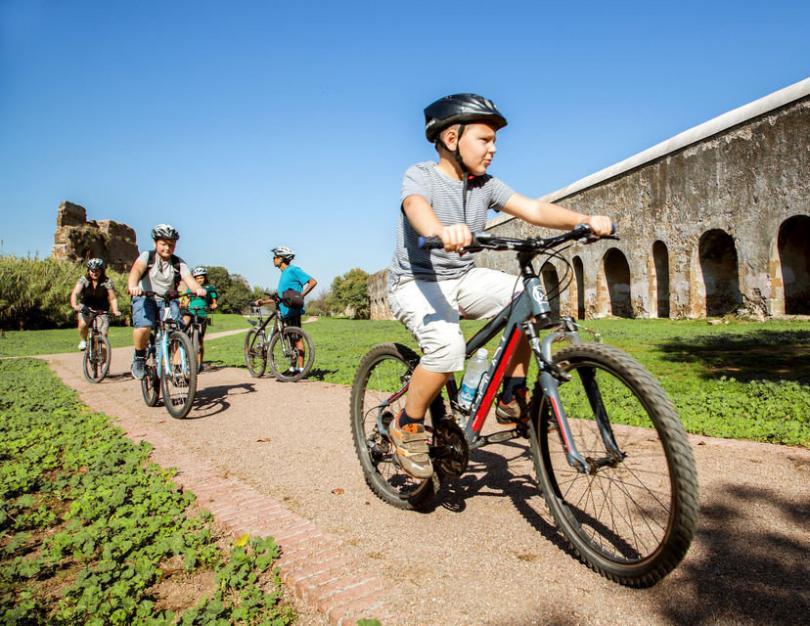 Countryside remains of the Ancient Rome offers remarkable perspectives. Enjoy cycling and seeing 23-centuries-old paving stones as well as an amazing view of the nature.

You will have the chance to see the ancient tombs and remains of an Imperial Palace. On your way, listen to your guide because he will tell all interesting facts and historical cases about Rome and that may be surprising for you.

In the tour, a visit to St Callisto’s or St. Sebastiano’s Catacombs is included.On your way along the Appian Way, you will have a chance to rest and enjoy delicious aperitif before heading the way again to see ancient waterways.

You will feel like you are living and experiencing the old, wild and ancient times of Rome. Enjoy your tour until the end and be ready for your return to the city center of Rome.

About Appian Way and Catacombs

The Via Appia (Appian Way) was ancient Rome’s link with its empire in the east. The first section of it, leading out of the old Porta Appia (now the Porta San Sebastiano), was built in 312 BC, and the road was extended to the ports of Taranto and Brindisi in the ‘heel’ of Italy in 190 BC.

Parts of it are still paved and lining its route are the tombs of the Roman patrician dead and the catacombs of the early Christians.

CATACOMBE DI SAN CALLISTO: There are 20km of galleries containing the remains of some 170,000 dead. Carved out of soft volcanic tufa, the burial niches, or loculli, are in tiers. The grander dead had separate tombs or entire chapels; tombs of the early popes are generally.

CATACOMBE DI SAN SEBASTIANO: These catacombs were begun in the 1st century BC as a pagan cemetery. St Sebastian was buried here, and the bodies of St Peter and St Paul are supposed to have been brought for safe- keeping. Inscriptions on the wall give credence to these claims. Above the catacombs is the 17th-century church of San Sebastiano, occupying the site of a basilica dating from the reign of Constantine.

TOMBA DI ROMOLO: Across the Via Appia is the Tomb of Romulus, son of the tyrant Maxentius, who died in AD 309. Not unlike the Pantheon in design, it is placed at the centre of an area enclosed by a four-sided portico. Beyond it lie the ruins of Maxentius’ palace.

CIRCO DI MASSENZIO: Built in AD 309 by Maxentius, this was ancient Rome’s last racetrack, 520m long and 92m wide. At its head are the ruins of two towers between which were 12 starting gates for chariot races (see page 160). At the other end was a triumphal arch and down each side were tiers of seats for 10,000 spectators. In the middle of the arena the spina was dominated by an obelisk now in the Piazza Navona.

TOMBA DI CECILIA METELLA: Built soon after 50 BC, this tomb belonged to the wife of Marcus Crassus, son of the rich triumvir who ruled Rome with Pompey and Caesar. In 1302 Pope Boniface gave it to his family and it was turned into a fortress blocking the Via Appia.

Found on the Appian Way, nearby the Colosseum, this course is a special and interactive method to learn about ancient Roman history, activities, and society. Your friends and family members […]
Gladiator Museum Tickets
18 Via Appia Antica 0.32 km

Learn more about the face masks, safety helmets, armour, and weapons, used by Roman Gladiators and armed force of old times. You'll likewise have the possibility to learn more about exactly […]
Catacombs of St.Callixtus Guided Tour
110/126 Via Appia Antica 0.99 km

The catacombs are eternal homes of many martyrs, 16 popes, and several Roman Christians. The little Vatican, family tombs, the Crypt of St. Cecilia – explore more than these three with your […]
Underground of Rome and Catacombs Guided Tour
110/126 Via Appia Antica 0.99 km

With the shuttle bus leaving from the meeting point that will be shared with you, go to the Catacombs of St. Callixtus and meet your expert guide to start your tour through the ancient tunn […]
Baths of Caracalla Tickets (with Video Guide)
Unnamed Road 1.5 km

Delight in a half-day strolling tour of Christian Rome and explore underground treasury in a few of the most astonishing churches. Your tour guide will certainly inform you remarkable reali […]
Private Tour for St. John Lateran, Holy Stairs, and Baptistery
42 Via Locri 1.91 km

You will also have a chance to admire the central nave and amazing sculptures together with a ceiling that was decorated by Borromini in the 16th century. After this, you are going to enter […]
Half-Day Tour: Catacombs of Rome with Main Basilicas
4 Piazza di S. Giovanni in Laterano 1.94 km

Next one is St. Mary Major Basilica where you can see stunning collections of handmade and historical objects. You will be amazed by the Crypt of the Nativity and the mosaics. The next stop […]
Christian Rome Afternoon Guided Tour
4 Piazza di S. Giovanni in Laterano 1.95 km

The Holy Door is opened by the Pope every 25 years, so you'll probably need to get in via the main bronze door which once stood in the Senate hall in the Roman Forum. The basilica is home t […]
12...17