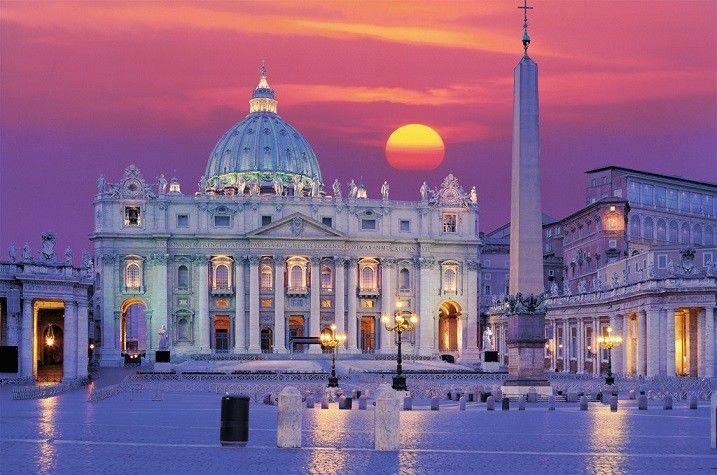 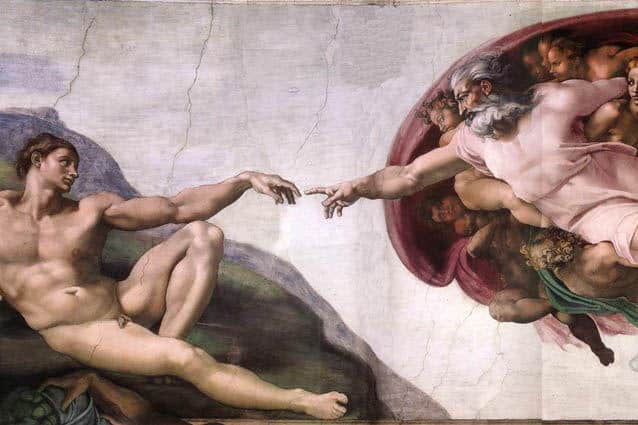 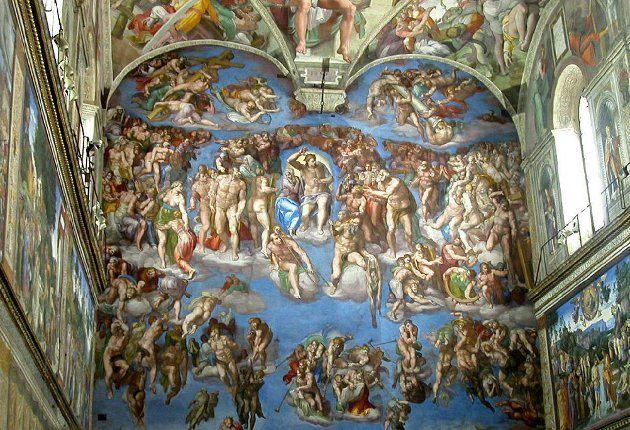 Avoid the lines and delight in a semi-private VIP early morning tour of the Vatican. Admire artworks by Michelangelo, Botticelli and others in the Vatican Museums.

Marvel at the frescoes in the Sistine Chapel and obtain privileged entryway to St. Peter’s Basilica.

Saint Peter’s Square, the centre of Christianity for over a thousand years, is artistically and religiously moving. It is a huge place, harmoniously open to the heavens, a perfect ellipse two hundred and forty metres wide, and surrounded by magnificent colonnades by Bernini. it contains two hundred and eighty-four Doric pillars set in four rows and surmounted on the entablature by one hundred and fort>’ statues of Saints and Martyrs. There are two great fountains on each side by Maderno and at the centre, in 1586, an Egyptian Obelisk was placed (a relic of the True Cross is kept on its summit). There are two interesting things to look out for in this square; by standing between the two fountains, on a round porphyry slab, the two hundred and eighty four pillars seem set perfectly in a row and only the first column is visible; to the right of the basilica are the apostolic palaces, between which the Sistine Chapel is visible. On its triangular shaped roof can be seen the famous chimney from which comes the white smoke announcing that a new Pope has been elected.

Here at one time was Neros Circus, here St. Peter was martyred and the Apostles were buried. Because of this, Constantine, newly converted to Christianity, had built on this very spot a basilica around which Pope Symmachus in 500 AD built the first residence of the bishop of Rome.

Throughout the centuries the district grew in size. Here it was on Christmas Day (800 AD) that on the tomb of St. Peter, and not in the cathedral of Rome (which was then the church of S.Giovanni in Laterano), that Leo III crowned Charlemagne. In 1377 the exiled Popes returning from Avignon, established the Curia here until Julius II decided to build in the place of the old basilica of Constantine, now become unsafe, a new splendid church; the work was entrusted to the architect Bramante. The building of this church took more than a hundred and fifty years. On the death of Bramante in 1514, Raphael took over, followed by Antonio da Sangallo the Younger, who continued until 1546 when the task was finally passed on to Michelangelo, who decided on a church in the shape of a Greek cross and designed the dome, but he only saw it completed as far as the drum.

Later Paul V entrusted Carlo Maderno to revert to the 90 Latin cross, to add three chapels on each side, and to build the facade; the latter was built between 1606 and 1614 but was criticised because too large in proportion to its height. In 1626 Bernini, certainly the greatest Baroque architect, was entrusted to reconstruct the facade; he had the superb idea of building an immense elliptical colonnade for the square.

The crowning feature of St. Peter’s is the grandiose dome by Michelangelo visible from every part of the city The dome stands on a drum which has a series of windows surmounted by elegant pediments, alternately semi- circular and triangular, separated by double columns. You get to the dome by climbing five hundred and thirty seven steps or by using the elevator from the top you can enjoy a lovely view of Rome. The sphere that crowns the dome’s lantern is so big it can hold a few people. In front of the fagade is a portico by Maderno containing the equestrian statues of Constantine (by Bernini), the first Christian Emperor and Charlemagne (by Cornacchioni),the first Emperor of the Holy Roman Empire. Five doors lead into the basilica. The last door on the right is the Holy Door, only opened during the Holy Year, the middle door is the 4th century so-called Door of Filarete and the last door on the left is the recent Door of Death (1964) done by Giacomo Manzu for Pope John XXlll.

Here we are in the sublime, harmonious vastness of the biggest Christian church, it is over two hundred and ten metres long and the dome is a hundred and thirty six metres high. A good idea of the vastness of it ail is obtained by bearing in mind that the putti (baby angels) are bigger than a man, while the immense central canopy is as high as a Roman palace.

There are so many things to see, that we can but discuss the most important: the Pieta by Michelangelo, sculptured by the great artist (who was not yet twenty five years old), for the jubilee of 1500 AD. It is the only work signed by the artist (his name is carved on the sash of the Madonna). This work of extraordinary beauty is totally different from the tragic Pietas sculptured later by Michelangelo; in this one, for example, the Madonna is depicted, strangely enough, like a girl. Also important are: the bronze Baldachin by Bernini and the beautiful and venerated statue of St. Peter The Baldachin is a gigantic baroque structure upheld by spiral pillars, cast using the bronze decorations from the Pantheon.lt was placed over the papal high altar which is actually over the Tomb of St. Peter (1624-1633). The ninety nine lights of the hemycycle are kept permanently lit to illuminate the tomb of St. PeterYears later Alexander VII entrusted Bernini to redesign the apse. The artist conceived a reliquary throne in gilded bronze, large Baroque construction protecting the wooden throne, considered to be the true throne of St. Peter Surmounted by a bright glory of rays and by the doue of the Holy Spirit, it is crowded by innumerable figures in gilded stucco. There are two great sepulchral monuments on each side: the tomb of Pope Paul II (1575, by Guglielmo della Porta) and the Tomb of Pope Urban VIII (1647, by Bernini ). By the dome’s pillars are four Statues of Saints, amongst which St. Longinus by Bernini (in his hand is the spear that pierces the body of Christ). We conclude our visit with the Sacristy and the Museum of Saint Peter’s Treasury where we find a precious Ciborium by Donatello and the Tomb of Pope Sixtus IV by Antonio del Pollaiolo.

Finally we will visit the Caves of the Vatican (entrance from a pillar of the dome). Here, we find the remains of the ancient Costantinian Basilica and the tombs of many pontiffs.

Get in through a reserved entrance to avoid the lines, and stay a step ahead of the big crowds on this carefully prepared route that ensures you take advantage of your time. Get in the UNES […]
Best of Rome Pack: Roma Super Pass
97 Viale Vaticano 0.05 km

With this ticket to the best littles Rome, you'll bypass the waiting travelers and get easy access to Rome's major sights. If you're quickly you can see the Vatican Museums and Sistine Chap […]
Vatican Museums Last Minute Tickets
95 Viale Vaticano 0.05 km

Once within, explore this mind-blowing collection of Renaissance art, and its crowning glory, the Sistine Chapel, at your own leisure. See Michelangelo's handiwork, and along the way, Rapha […]
Vatican Museums, Sistine Chapel and Saint Peter’s Basilica Guided Tour
102 Viale Vaticano 0.08 km

This exceptional trip includes, among other galleries of the Vatican corridors, a tour of the Pine Courtyard, Belvedere Courtyard, the Gallery of the Maps, Candelabra Gallery, Pio Clementin […]
Vatican Museums and Sistine Chapel Fast - Track Entry
100 Viale Vaticano 0.09 km

This will be the fastest option offered that will also make it available for you to make your own plan. Additionally, audio guidance is also included. Spend some time to explore sarcophagi, […]
Vatican Museums and Sistine Chapel by Night Guided Tour
3 Via Santamaura 0.16 km

Skip the lines and take pleasure in the galleries when the large crowds have departed. See work of arts by Raphael, Michelangelo, and more.
Vatican & St. Peter’s Basilica and Vatacombs Tour
Unnamed Road 0.18 km

See among the most important collections of art in the world at the Vatican Museums, which consist of more than 1,200 rooms. This tour include the Rooms of Raphael, the Sistine Chapel and t […]
Vatican & Sistine Chapel Guided Tour for Kids
1 Via Sebastiano Veniero 0.19 km

Dream your kids immersed in rich tradition and ancient wonders with a regional English-speaking guide that makes learning fun. Give your family members the experience of a lifetime on this […]
12...17