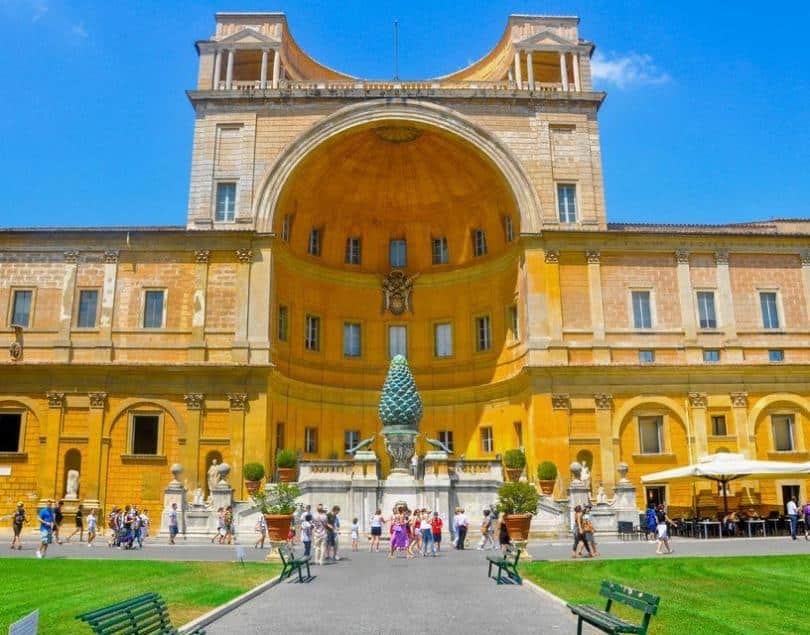 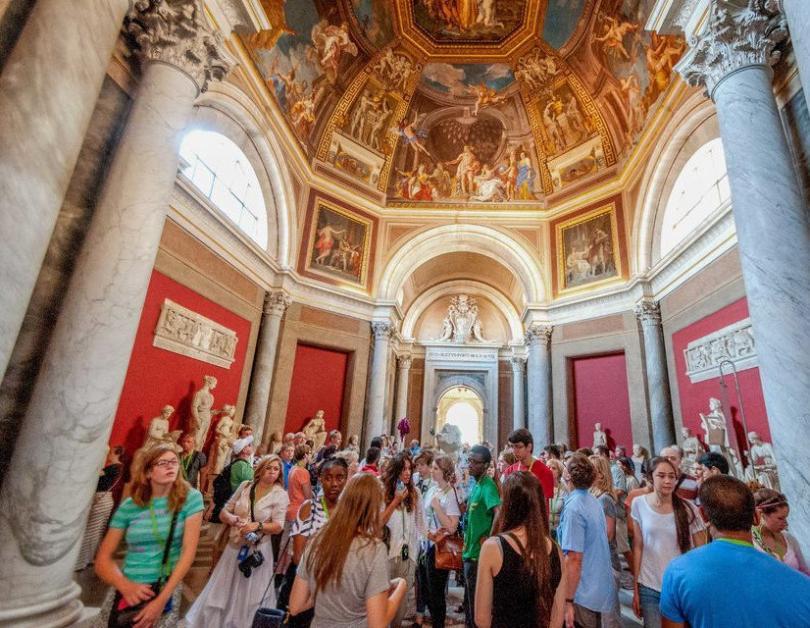 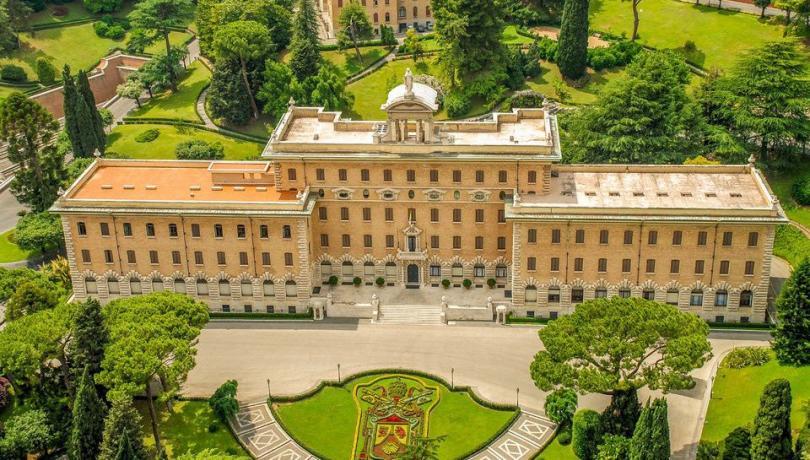 Use the chance to have this ticket and start exploring the artworks and religious history at Vatican Museums as well as Sistine Chapel, without spending time in lines.

This will be the fastest option offered that will also make it available for you to make your own plan. Additionally, audio guidance is also included.

Spend some time to explore sarcophagi, which are hand-carved down to the last detail and is thought to be home for the remains of old-time well-known queens and kings, at the Greek Cross Gallery. Visit the Sala degli Animali and explore virtually some imaginary as well as some real figures of fantastic beasts – or you can also visit the Cabinet of the Masks.

Do you want to see how the world map by map-makers changed with the time? Yes? Then you should certainly visit the Upper Galleries that also includes the Gallery of Maps. Check Raphael Rooms to see some work of arts by the hands of some Renaissance masters and to have a rest, visit the Borgia Apartments.

Next thing in the plan? It is time to be astonished by different work of arts like Sistine Chapel with Michelangelo’s artwork or Vatican’s crown jewel and many other.

Perhaps more than for anything else, the Vatican Museums are famous for their collections of Greek and Roman sculpture. Pope Julius II began to form this collection in the 16th century, but it was not until 200 years later that Clement XI and his successors conceived the idea of a museum proper. Under Benedict XIV the first of the Vatican Museums, dedicated to Christian antiquities, was opened (1756) in the Vatican Library.

During the Renaissance for Sixtus IV, Innocent VIII and Julius II. Bramante designed a part of it, and there were significant additions in the 18th century. The complex also houses the Cappella Sistina (Sistine Chapel) and the Stanze di Raffaello (Raphael Rooms), a series of chambers frescoed by Raphael.

MUSEO CHIARAMONTI AND MUSEO PIO- CLEMENTINO: These two sections contain the Vatican’s huge collection of classical sculpture. The less interesting Chiaramonti Museum has many portrait busts, as well as a famous statue of Augustus. The Museo Pio- Clementino’s treasures include the Apoxyomenos , a 1 st-century Roman copy of a Greek original portraying an athlete scraping his body (Room X) and the Apollo Belvedere (AD 130), another Roman copy, in Room VIII. Next to the Apollo is the Laocoon group (50 BC) described by Pliny the Elder. It was dug from the ruins of the Domus Aurea  and wrongly reassembled by Michelangelo. The Belvedere Torso (1st century AD), an object of veneration for sculptors from the Renaissance to Rodin, is in Room III. The Sala degli Animale is filled with carved animals, many of them heavily restored. From the Villa Adriana  came the Candelabri Barberini, original 2nd-century lamps.

SALA DELLA BIGA: Visit this room to see the remains of a 1st- century BC two-horsed chariot. Until the 18th century it was used as part of the episcopal throne in the church of San Marco.

GALLERIA DEI CANDELABRI: The first of three galleries built by Bramante to link different areas of the palace, this contains pairs of marble candlesticks from the imperial era of ancient Rome, as well as a quantity of marble statuary.

GALLERIA DEGLI ARAZZI: This gallery takes its name from the tapestries (arazzi) contained in it. Ten 16th-century Brussels tapestries, based on cartoons from Raphael’s workshop, illustrate stories from the life of Christ. On the right wall are tapestries recording events from the life of the Barberini pope, Urban VIII, commissioned in his honour in the 17th century by his nephew.

GALLERIA DELLE CARTE GEOGRAFICHE: The Map Gallery has 40 panels painted on its walls in the 16th century. Each one depicts a region, island or particular territory of Italy.

SALA DELLA CONCEZIONE: This room, decorated with frescos, is devoted to Pius IX’s proclamation on the dogma of the Immaculate Conception (1854). It also contains Michelangelo’s model for the dome of St Peter’s.

STANZE DI RAFFAELLO: Julius II balked at the idea of occupying the apartments used by his unsavoury Borgia predecessor, Alexander VI, and in 1509 commissioned Raphael to redecorate a suite of four small rooms for his own use. By 1520, the year of Raphael’s death, only three of the rooms were complete and not all of them were wholly painted by the master. Nevertheless, this is one of the greatest cycles of fresco painting from the High Renaissance, even if great works by earlier masters of Renaissance painting, Perugino and Piero della Francesca among them, were obliterated in the process.

This exceptional trip includes, among other galleries of the Vatican corridors, a tour of the Pine Courtyard, Belvedere Courtyard, the Gallery of the Maps, Candelabra Gallery, Pio Clementin […]
Vatican & St. Peter’s Basilica and Vatacombs Tour
Unnamed Road 0.07 km

See among the most important collections of art in the world at the Vatican Museums, which consist of more than 1,200 rooms. This tour include the Rooms of Raphael, the Sistine Chapel and t […]
Vatican Museums and Sistine Chapel Fast - Track Entry
100 Viale Vaticano 0.09 km

Dream your kids immersed in rich tradition and ancient wonders with a regional English-speaking guide that makes learning fun. Give your family members the experience of a lifetime on this […]
Vatican Museums and Sistine Chapel by Night Guided Tour
3 Via Santamaura 0.11 km

Skip the lines and take pleasure in the galleries when the large crowds have departed. See work of arts by Raphael, Michelangelo, and more.
Vatican and St. Peter's Basilica Small Group Tour

With this ticket to the best littles Rome, you'll bypass the waiting travelers and get easy access to Rome's major sights. If you're quickly you can see the Vatican Museums and Sistine Chap […]
Vatican Museums Last Minute Tickets
95 Viale Vaticano 0.15 km

Once within, explore this mind-blowing collection of Renaissance art, and its crowning glory, the Sistine Chapel, at your own leisure. See Michelangelo's handiwork, and along the way, Rapha […]
Early Entry Vatican Museums and Small-Group Tour with St. Peter’s and Sistine Chapel

Get in through a reserved entrance to avoid the lines, and stay a step ahead of the big crowds on this carefully prepared route that ensures you take advantage of your time. Get in the UNES […]
Full-Day Tour from Rome: Naples and Pompeii with Lunch
21 Viale dei Bastioni di Michelangelo 0.16 km

from €125.00 EUR
Duration: 13 Hours
Organized by: Gartour by Destination Italia

First, you will enjoy a panoramic tour of the city center when you arrive at your destination. You will have the chance to visit San Carlo Opera, Piazza del Municipio, the Gallery of Umbert […]
12...17