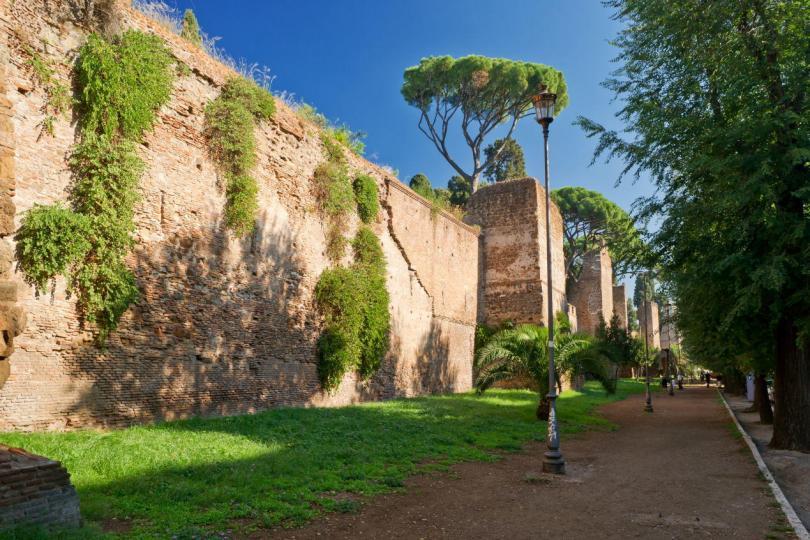 One of the most gorgeous monuments of Rome is the Aurelian Walls, an encircling ring which is still largely intact. It was built by Emperor Aurelian in between 270 – 272 A.D.  to protect the city against attacks by barbarians and was finished by Probus (ruled 276-282 A.D.). According to tradition, the most city’s first walls were built by the sixth king of Rome, Servius Tullius (sixth century BC). The walls now visible, however, built of tufa from the quarries of Grotta Oscura, were built after the Gallic invasion.

Livy (Titus Livius) says that construction of the wall was decided in 390 B.C. by the censors, the magistrates who oversaw public works. They used tufa from quarries that fell Rome after the conquest of Veii (396 BC). These walls enclosed an area of 426 hectares and were rebuilt on a number of occasions between the fourth century BC and 87 BC (during the civil war between Marius and Sulla). 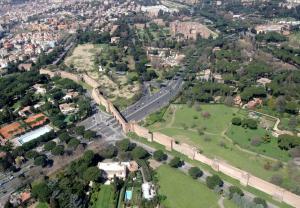 After the republican era, however, the city remained practically without wralls until 271 AD, when the Emperor Aurelian decided it was advisable to fortify Rome against Barbarian incursions, above all in the long periods when wars kept him abroad. The work went ahead rapidly and by the time of Aurelian’s death in 275 most of the wall must have been built. It fell to his successor Probus to complete the work. 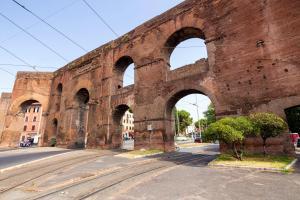 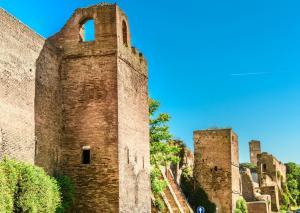 The Aurelian Walls are a line of city walls built between 271 AD and 275 AD in Rome, Italy, during the reign of the Roman Emperors Aurelian and Probus,Roma,Italy,Europe.

This wall, made of brick, was 6 metres (20 feet) high and 3.50 metres thick. (and in some places was as high as 10 m.)  It was fortified with square towers every hundred passi (equal to 30 metres). Its length was just under 19 kilometres (12 miles) and it took in numerous earlier edifices. The first emperor to strengthen it was Maxentius, but the most massive enlargement was the work of Arcadius and Honorius. Facing attacks by the Goths in 401-402 they doubled the wall’s height; the path along its top patrolled by guards was replaced by a covered gallery and the Mausoleum of Hadrian was included in the fortification as a castle outpost on the right bank of the Tiber. 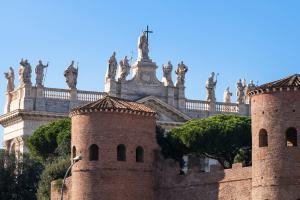 Other buildings were also incorporated in the Roman walls. One of the most ancient annexed during construction of Aurelian’s wall was the Pyramid of Caius Cestius, erected under his testament in less than 330 days. The bronze statues of Caius Cestius, now in the Musei Capitolini, were paid for with money from the sale of tapestries from Pergamum which could not be placed in the sepulchre because of a sumptuary law of 18 BC.

Scenic view of the Pyramid of Cestius, iconic landmark in Testaccio district in Rome, Italy.

Aurelian Walls fulfilled its function as fortification until 1870, when the troops of the Kingdom of Italy broke through northwest of the Porta Na, using modern artillery, and took City.

In Aurelian’s project the main gates set in the walls consisted of twin entrances, covered with arches and contained within twyo semicircular towers. More modest entrances were simply inserted in a stretch of walls between two square towers. 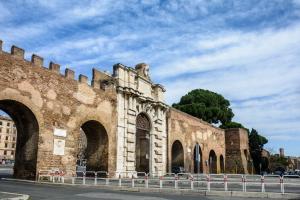 The Gate of San Giovanni in the Aurelian Walls. 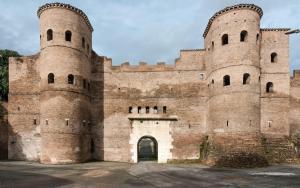 The Porta Asinaria, a gate in the Aurelian Walls of Rome,Italy. It was a simple gate,but Honorius added two semi-cylindrical towers to increase its resistance to the probable attacks of enemies

In the course of the reinforcements decided by Arcadius and Honorius many of the double entrances were eliminated and the towers were raised and fortified. The gates, with an inner counter-door, were transformed into self-sufficient fortresses, The closure wras doubled and consisted on the outside of a double door and on the inside of a portcullis which could be raised and lowered. 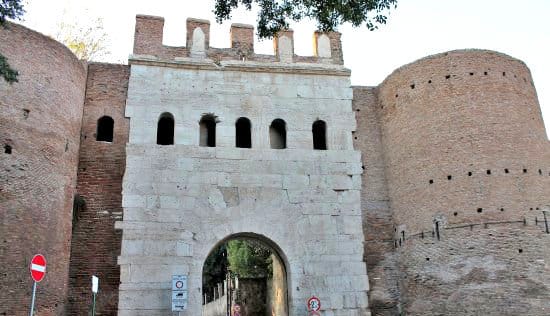 One of the best preserved stretches of the Aurelian walls between Porta Latina and Porta San Sebastiano, with the Museo delle Mura (Museum of the City Walls). Here it is also possible to walk along the top of a section of the walls.

Museum of the City Walls is located inside the Appia gate, better known as the Porta San Sebastiano, one of the largest and best preserved entry gates along the Aurelian Wall.

The recent arrangement, with the Museum divided into ancient, medieval and modern sectors, uses educational placards in Italian and English, plus scale models, to illustrate the historical- architectural development of the City’s fortified perimeter. From inside the Museum, visitors can also enter the only section of the wall-top sentryway open to the public, all the way to the barrel- vaults on the Via C. Colombo.