Immediately after the fire of 64 AD, which destroyed most of the centre of Rome, Nero built a new imperial residence: Domus Aurea. This was far bigger and more luxurious than the previous one, the Domus Transitoria (House of Transition).

Its walls were decked with gold and precious stones, giving it the name the Domus Aurea or Golden House. Nero employed Severus as architect, and Fabullus as painter, and produced what has been called the first expression of the Roman revolution in architecture. The new palace was immense: it covered the Palatine, Velia and Oppian hills and the valley where the Colosseum was later built.

Join an expert guide to discover the Domus Aurea, or the Golden House, designed purely for the pleasure of Emperor Nero, and find out about the history of the site and its remaining riches […]

People exploring antique roman ruins being restored – Work stopped when Nero died in A.D. 68, and subsequent emperors demolished large portions of the palace in favour of projects such as the Colosseum. Most of the Domus itself was swallowed up by Trajan’s Baths (A.D.104-9). Rome’s first truly monumental bath complex, its plan was copied by all that followed.

The astronomic orientation of the building confirms the theory that Nero saw himself as the sun god and therefore frequently used symbolism of the stars and sun. The head of his colossal statue, too, was surrounded by a corona. (surpassing the famous Colossus of Rhodes, and the largest statue ever made in antiquity)

This grandiose edifice did not long survive the tyrants death in 68 A.D., as succeeding emperors demolished or covered up his buildings. In 72 A.D. Vespasian obliterated the lake to build the Colosseum; Domitian (81-96 A.D.) buried the constructions on the Palatine to make room for the Flavian palaces. Trajan (98-117 A.D. ) destroyed the houses on the Oppian to build his baths; and Hadrian (117-78 A.D. ) built his Temple of Venus and Roma on the site of the atrium, and moved the statue. During the Renaissance, parts of the substructure and ground floor rooms of Nero’s palace were exposed, revealing many ancient works of art, including the Laocoön group in 1506.

Reconstruction of the great hall of the Domus Aurea with the Laocoon, in a painting by G. Chedanne (nineteenth century). Musée des Beaux-Arts, Rouen.

Ancient statue of Laocoon and his Sons in Vatican, Italy. The Trojan Laocoon was strangled by sea snakes with his two sons. In 1506, another renowned work, the Laocoon (now in the Vatican Museums) was also retrieved from the Domus Aurea. The group was wrongly reassembled by Michelangelo (who was also responsible for restoring part) until a vital missing link (an arm) was found in a Roman antique shop in 1906.

All memory of the palace was lost during the later Empire and Middle Ages. Renaissance painters exhaustively studied the finely detailed, imaginative frescoes from Nero’s time in the subterranean chambers which they called grottoes, and derived a new style known as grotesque painting from them. Unfortunately there is very little left to see. Parts of the decoration survive only in the Nymphaeum, where the vault shows a mosaic depicting Odysseus and the Cyclops Polyphemus.

Scene at the centre of the vaidt in the Room of Achilles at Scyros.

Today visitors can view the labyrinthine but well-lit subterranean palace only by booking a tour lasting approximately 45 minutes in Italian or English, or in other languages with an audio guide. A passage system consisting of a corridor and cryptoporticus with adjacent rooms, some of which are decorated with frescoes and stucco with garlands, tendrils, birds, putti at play, mythological scenes and landscape views, leads to the octagonal hall.

A statue relief of emperor Nero’s head on the gateway entrance to the park that contains the ruins of his golden palace at domus aurea in Rome.

This hall represents a revolution in building technology. Instead of round arches, simple pillars at the corners of the octagon are sufficient to support the hemispherical vault, which is 14m/46ft in diameter and made of cast mortar. The rectangular openings between the supports serve as alcoves and entrances and terminate in horizontal lintels to provide additional support for the semi-dome, which has an oculus at the highest point to admit sunlight.

Archaeologists are still debating whether this is a central living and dining area or a room for contemplating works of art. A small rectangular adjacent room is decorated with stucco and paintings.

The luxury of the 80ha/198-acre palace, of which 150 rooms have been made accessible to date, was recorded by the emperor’s biographer Suetonius (c. 70-130):

“A huge statue of himself, 120 feet high, stood in the entrance hall; and the pillared arcade ran for a whole mile. An enormous pool, more like a sea than a pool, was surrounded by buildings made to resemble cities, and by a landscape garden consisting of plowed fields, vineyards, pastures, and woodlands — where every variety of domestic and wild animal roamed about. Parts of the house were overlaid with gold and studded with precious stones and nacre. All the dining rooms had ceilings of fretted ivory, the panels of which could slide back and let a rain of flowers, or of perfume from hidden sprinklers, shower upon his guests. The main dining room was circular, and its roof revolved slowly, day and night, in time with the sky. Sea water, or sulphur water, was always on tap in the baths. When the palace had been completely decorated in this lavish style, Nero dedicated it, and condescended to remark: “Good, now I can at last begin to live like a human being (Source: Lives of the Caesars)“

In its time, the Domus Aurea (Nero’s Golden House), was one of the most fantastic, if vulgar, palaces Rome has ever seen. Today, parts of the once huge complex— now underground—are open to public view and can be entered from the Colle Oppio, one of Rome’s most delightful neighbourhood parks . 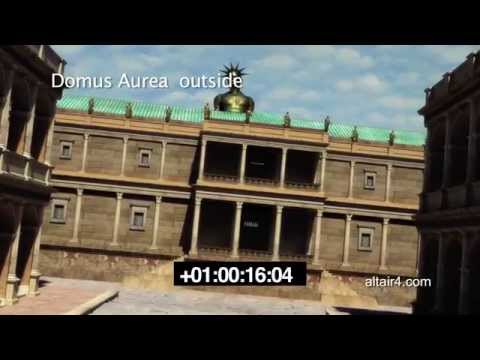 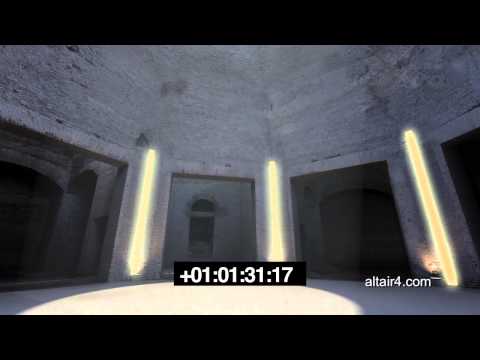