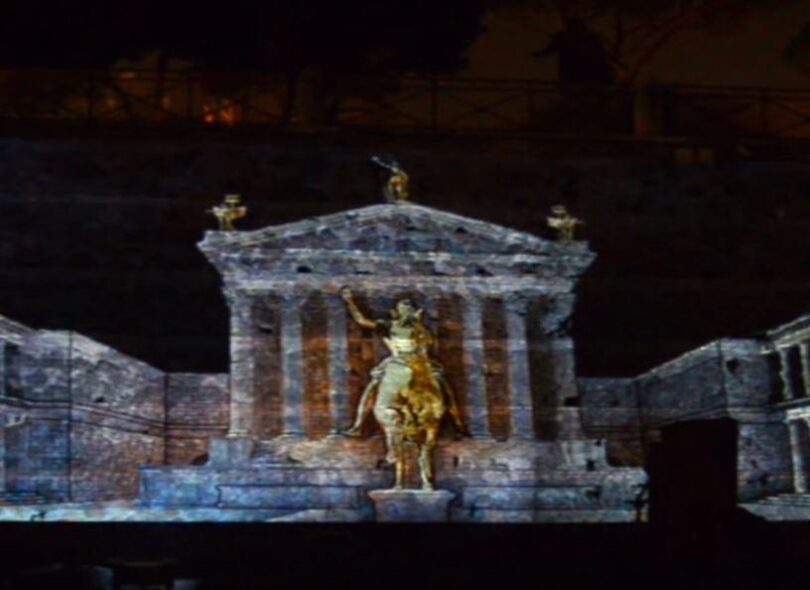 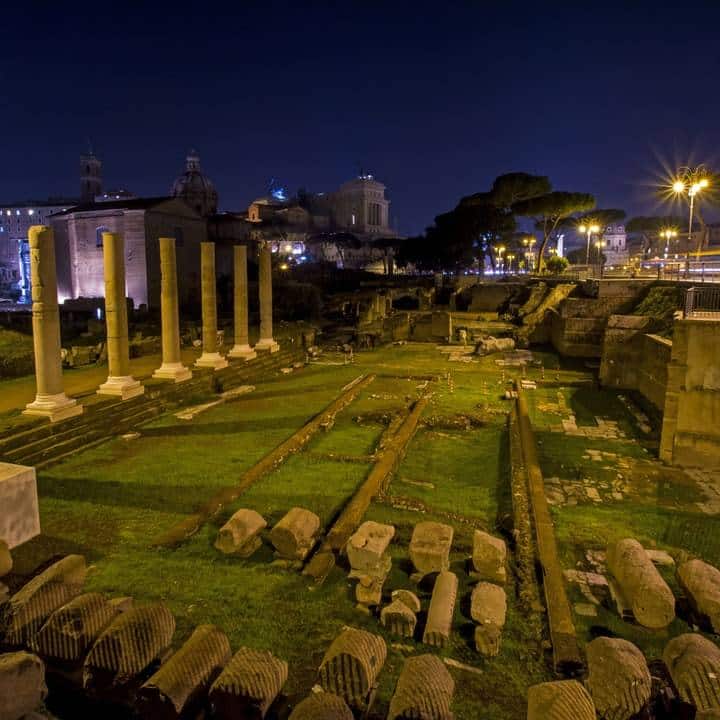 Hear the sound of extravaganza that comes from Ancient Rome and telling the story of Julius Caesar and feel the shock!

The lightshow, the projection show and the music will take you to the time of Ancient Rome, while you are standing in the Trajan Forum.

You will be in one of the most tourist-wise popular archeological area and you will feel the aura of the temple that once hosted many events and activities in Rome. The amazing multimedia show will be one of the best memories for you from your journey in Rome!

The show in the forum offers astonishing moments and portray the life in Ancient Rome with amazing sound effects and extraordinary visuals projected on the ruins.

The voice in the story of Julius Caesar’s life is Piero Angela’s and he is one of the best science journalists around the world.

The Forum of Julius Caesar, consecrated in 46 B.C. and later finished by Augustus was the first of the so-called Imperial Forums built with the spoils of victory from the Gallic Wars. Formed by a rectangular piazza surrounded on all sides by porticoes, it had at its center the Temple of Venus Genetrix.

The Julian family, to which Julius belonged, claimed to originate from Julo, or Ascanius, son of the Trojan hero Aeneas, who according to Homeric mythology was the son of the mortal Anchises and the Goddess Venus. The temple featured many works of art, among them the sculpture of Venus Genetrix by Arcesilao.

In its simplicity the Forum of Julius Caesar surpasses the narrow dimensions of the Republican age, and from an historical point of view, underlines the passage to the imperial age by anticipating the monumental complexes built by Caesar’s successors. The Forum was expanded by Trajan, who added the Basilica Argentaria.

Discover the prisoners who served time here, including Saints Peter and Paul, then gain access to the Colosseum through a special, sneaky entrance! Plug into your audio trip of the Mamertin […]
Mamertine Prison Tickets (with Video Guide)
1 Clivo Argentario 0.11 km

A specially designed video guide will help you find out what happened to old kings and emperors. As it can clearly be read, St. Peter was a “saint” but this didn’t prevent him to be impriso […]
Forum of Augustus: Evening Show Tickets
1 Piazza del Grillo 0.16 km

Lights of different colors, projections on the ruined wall, amazing music, and Ancient Rome. You come, you saw, you get entertained! While you are on your feet on Roman stairs, the astonish […]
Trajan's Markets and Imperial Forum Museum Tickets

The markets adjoined the Forum of Trajan, where the stunning Trajan's Column still stands. This ticket also consists of accessibility to the remarkable Museum of the Imperial Forum. If you […]
Trajan's Markets and Imperial Forum Museum Private Guided Tour

Located along Via dei Fori Imperiali, the complex, made from the red block and also concrete, had 6 levels with approximately 150 various stores and houses. Currently, the Trajan's Market h […]
Capitoline Museums Tickets
1 Piazza del Campidoglio 0.23 km

Your professional tour guide will certainly inform you exactly how the building on Capitoline Hill began, and how Michelangelo was appointed by Pope Paul III to design the square. The very […]
Half-Day Semi-Private Imperial Rome Tour
15 Via in Miranda 0.25 km

You are going to witness and learn more about how life used to be in the past in the Roman Empire with this tour consists of small groups. You are also going to enjoy the great view of Rome […]
Virtaul Tour: Domus Romane of Palazzo Valentini
85 Foro Traiano 0.25 km

With this tour, no matter you liked the history class during your education time, you will enjoy every moment of this virtual experience that shows you how Roman life was in the past. This […]
4-Hour Guided Bike Tour of Rome
15 Piazza Venezia 0.29 km

You'll visit in all the main tourist attractions of Rome, and likewise have a possibility to see lots of smaller squares and historical buildings that are less visited because of their loca […]
12...17