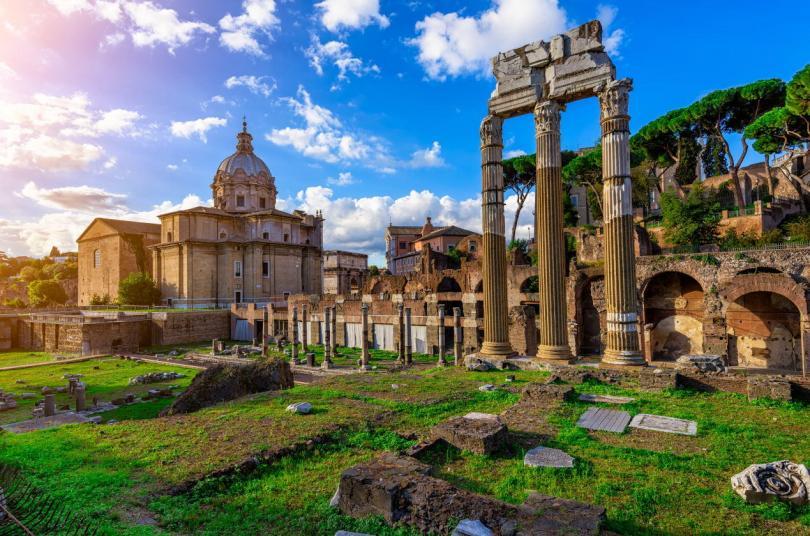 The Forum of Caesar was built with the spoils of his Gallic Wars. On the 9th of August 48 B. C., the decisive battle was fought between the formidable armies of Pompey and Caesar. The Julian Family boasted its origin from Julius, commonly called Ascanius, son of Aeneas, bom of Anchises and Venus.

On the morning of the Battle of Pharsalus, Caesar made a vow to build a temple to his goddess ancestor. Pompey was defeated completely and Caesar built the new Forum (between the old one and the Quirinal), in the center of which rose the Temple to Venus Genetrix. The focal point of the new Forum was the Temple of Venus Genetrix, the most important building erected in the city by Julius Caesar.

The lightshow, the projection show and the music will take you to the time of Ancient Rome, while you are standing in the Trajan Forum. You will be in one of the most tourist-wise popular a […]

When Caesar decided to construct a new Forum besides the old, in order to extend the political center of Rome, there were serious problems to be solved before his plan could be executed. Apart from the expropriation and demolition of a number of private houses, a great deal of leveling was necessary, a long stairway had to be cut in the slope of the Capitol and the neighboring Senate House had to be moved. The enormous cost of all this was met out of the vast spoils of the Gallic Wars. 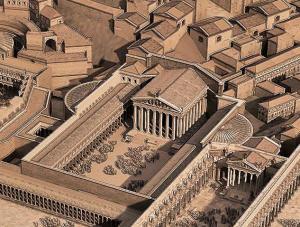 Reconstruction Model of Forum of Caesar – Caesar had to spend enormous sums of money (sixty million sestercians according to Cicero, one hundred million according to Svetonius) simply in acquiring the land and in expropriating the private buildings that occupied the area. ( Photo Credit: altair4.com ) 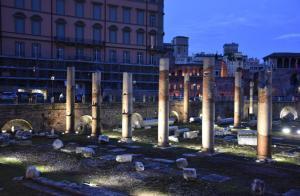 Rome. Panorama of the remains of the Forum of Caesar from the Campidoglio. 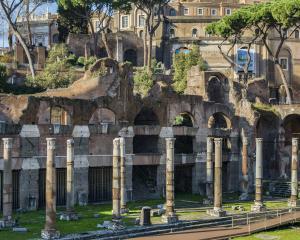 The Forum of Caesar, also known as Forum Iulium or Forum Julium. 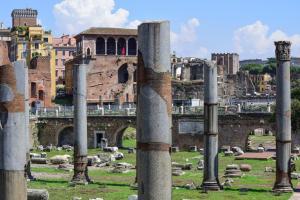 For centuries this temple remained a splendid monument, worthy of the fame and magnificence of the first Caesar. Among the numerous works of art placed in it, was the statue of Venus Genetrix, by Archesilaus, one of the most celebrated Greek sculptors, and one of Cleopatra.

Caesar deposited in the temple a veritable Museum of Greek Pictures and Sculptures, 6 collections of engraved gems, and a jeweled cuirass captured in Britain.

The temple was rebuilt by Trajan and inaugurated with the Trajan Column on the 12th of May of the year 113. Trajan added the Basilica Argentaria, or exchange building, as well as a large heated public lavatory (forica), remains of which survive above the shops. 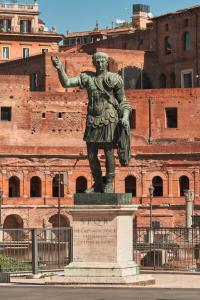 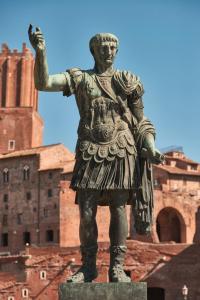 Two-thirds of the area of the Forum of Caesar has now been uncovered, but the ruins as we see them today are those of the Forum as it was modified by a major work of restoration undertaken in the reign of Trajan.

The excavations of the past years have revealed traces of the Forum and of the Temple of Venus Genetrix. For the occasion, the statue of Julius Caesar, copied in bronze from the one in the Capitol, was placed on a pedestal in the excavated ruins of the Forum. The Perpetual Dictator towers here in the glory of Rome. After almost 2000 years Caesar is still a popular hero.