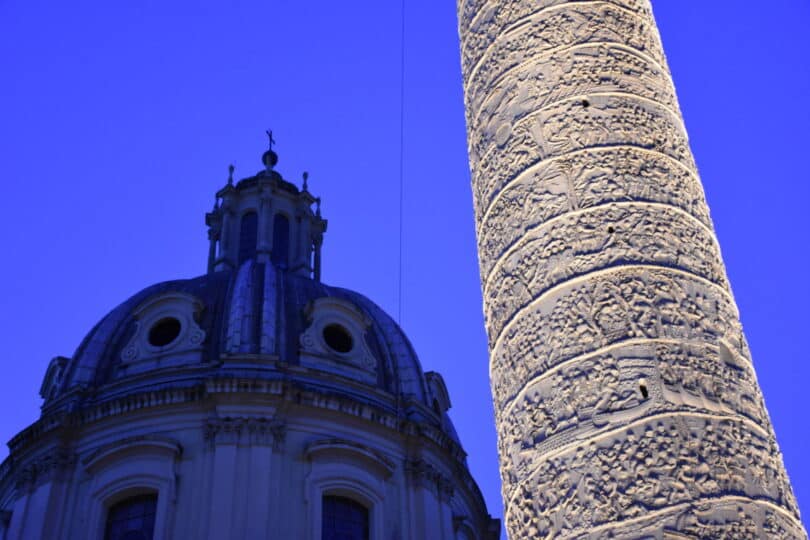 The Trajan’s Column was erected by Trajan between the two libraries in his forum is made up of nineteen cylindrical blocks of marble. 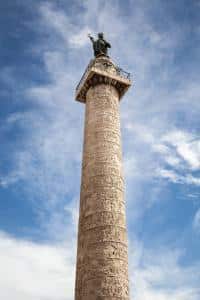 Trajan’s Column (in Italian Colonna Traiana) – its 18 drums of Greek marble are carved with a spiralling frieze of some 2,500 figures, actors in battle scenes which have provided a wealth of documentary detail about Roman arms and modes of warfare.

Set on a pedestal and topped by a great capital, the column measures 29.78 metres or one hundred Roman feet: a carefully calculated height. The shaft of the column once supported a statue of Trajan that disappeared in the Middle Ages and replaced by one of St. Peter in the sixteenth century (by Pope Sixtus V in 1588). 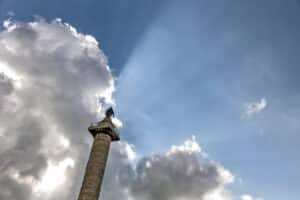 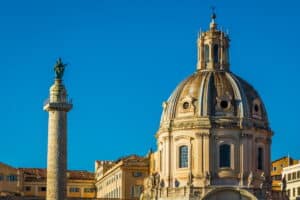 It rises on a cubic plinth, consists of seventeen drum-shaped marble sections, and can be climbed by a spiral staircase inside the column. A door is set in the base an inscription above it stating that the primary purpose of the monument was to indicate the original height of the hill excavated to construct the Forum of Trajan.

In fact the column was meant to function as the tomb of the Emperor Trajan and the entry in the base leads to an antechamber and then a large room which included a gold urn with Trajan’s burning ashes. The same door on the right leads to a spiral stairs of 185 steps, cut in the marble, which rises to the top of the Column of Trajan. This confirms that the column was designed and built as Trajan’s funerary monument. 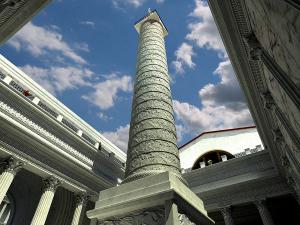 The decoration of Trajan’s column is without precedent. It is a continuous carved frieze about 200 metres long, originally painted, which unfolds in a spiral around the shaft of the column. 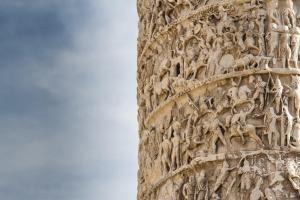 It illustrates episodes of the two wars waged and won by Trajan against the Dacians in 101-102 and 105-106 AD. (with more than 2,500 figures) The scenes from the two campaigns are separated by the figure of Victory writing on a shield. The artist’s intention was to provide a faithful record of events as they actually occurred. Given the column’s placing between the two libraries and the form of the carvings, it is likely that it was a reproduction of an ancient book in roll form and the carvings were a figurative representation of Trajan’s Commentaries, now lost, written in Dacia.

The frieze depicts minutely the main episodes of the war, though they repeat the same sequence of incidents: from the beginning of the enterprise with the crossing of the Danube on a bridge of boats to the deportation of the vanquished population, with battles, sieges, the construction of camps, speeches to the troops, and executions. The figure of Trajan appeal’s no fewer than sixty times.

Trajan’s Column set in the center of Imperial Forums, 0,9 km from (11 min walk) from Roman Colosseum.