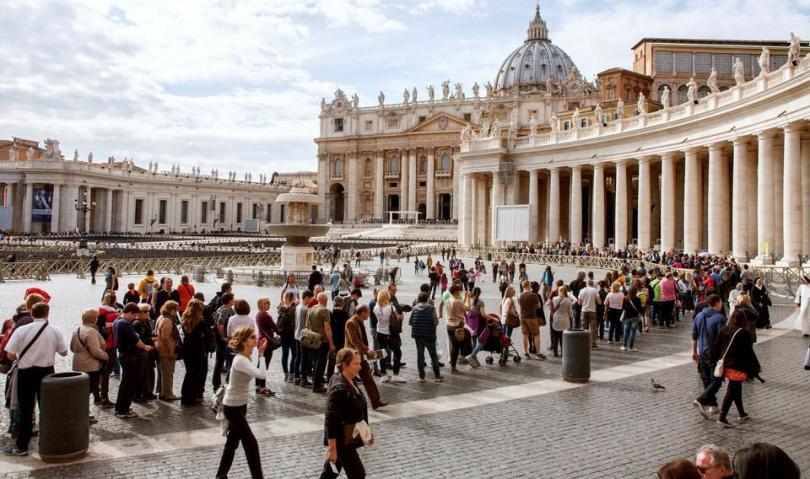 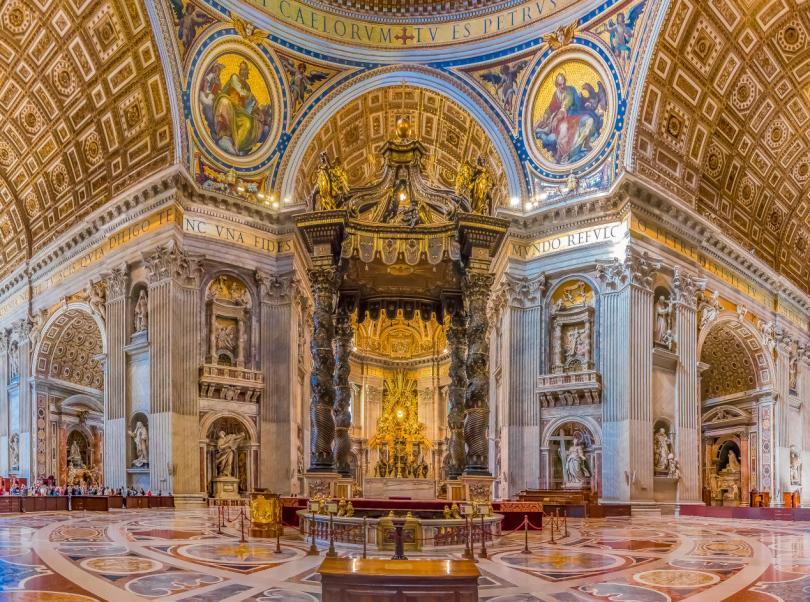 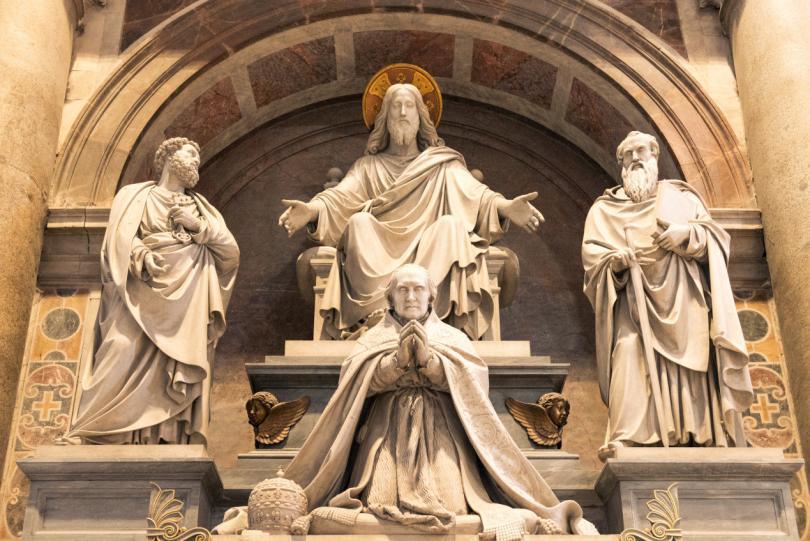 Enjoy a St. Peter’s visit completely flexibility and at your own pace utilizing your own smart phone or tablet. Just download the audio-guide app using the instructions provided on your booking voucher and discover the 31 sights your audio-guide points out. Save time at Saint Peter’s Basilica in the Vatican City, famous for its long entrance lines. With fast track gain access to, you will save up to – and frequently more than – one hour to get access to the most important Catholic church worldwide.

In the fourth century, the Emperor Constantine (312-337) erected the first basilica on the spot where St Peter had been buried. If we believe the accounts, it was immense, and its facade glowed with mosaics. In the ninth and tenth centuries, the church served as a magnificent setting for the coronations of Holy Roman Emperors like Charlemagne, Charles the Bald, and Otto I. But by the 1300s, after a thousand years of existence, this venerable edifice stood on the verge of ruin.

Reconstruction was unavoidable. The task fell to Julius II (1503-1513) from the early 1500s. He accepted the plans drawn up by Bramante, who had conceived the idea of crowning the basilica with a dome-like that of the Pantheon. Work was interrupted by the deaths of Julius and his architect but resumed in the pontificate of Paul III (1534-1549). Michelangelo, a former pupil of Bramante, was appointed architect-in-charge.

Resuming his master’s design, he abandoned the idea of a flattened cupola and set to work on a huge drum that would dominate the skyline. He died in 1564, his masterpiece unfinished; it was finally completed by Giacomo della Porta and Domenico Fontana at the end of the century. But by then the Counter-Reformation was in full swing, and in church design the Latin cross had become the norm. 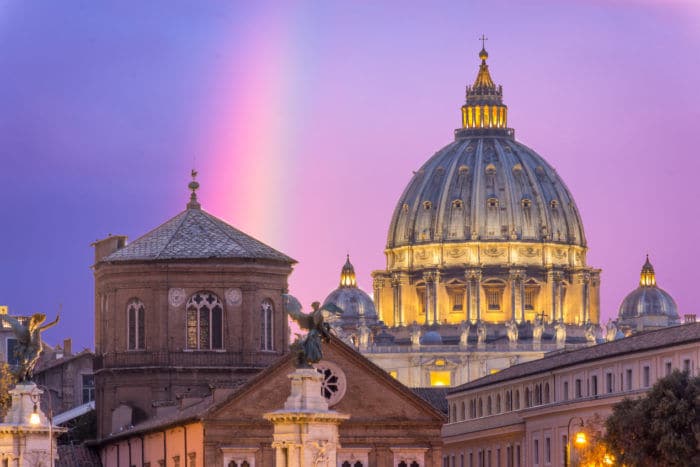 Paul III, therefore, employed Carlo Maderna to lengthen the nave and redesign the facade, arousing lively criticism since Michelangelo’s dome was now partly masked. The Basilica was eventually consecrated on 18 November 1626, to mark the 1,300th anniversary of the consecration of Constantine’s church. Bernini had only just managed to complete the famous Baldaquin, whose dizzy height and unparalleled richness of decoration distinguish the high altar where only the pope is entitled to say Mass. Later, Alexander VII (1655-1667) asked Bernini to decorate the apse.

It was there that the artist placed St Peter’s Chair. Above is a ‘gloria’ showing the triumph of the Holy Spirit in the form of a dove. Seen from the nave, the work is framed to perfection between the twisted bronze columns of the Baldaquin which Bernini had set in place some thirty years earlier. 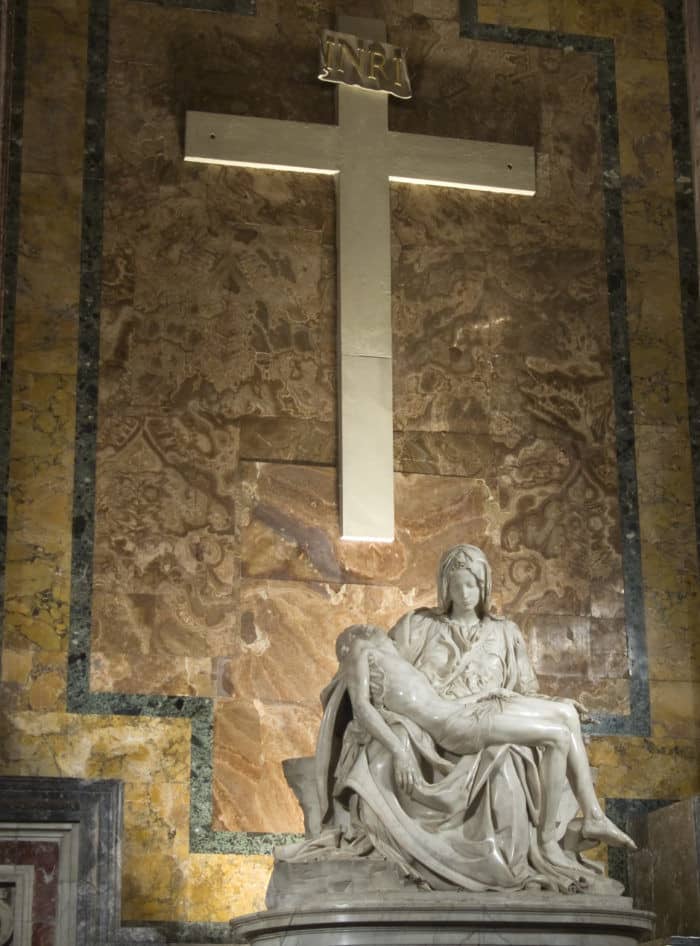 The overall effect is a stupendous Baroque paean to the glory of the Church Universal. In a few decades, Bernini had transformed the interior of St Peter’s into a grandiose theatre of marble and gold. All in all, the construction of the world’s largest basilica had taken more than a century and a half. It extended over twenty or so pontificates and required the service of some ten architects.

Delight in immediate access and a problem-free trip of Saint Peter's Basilica, among Rome's prime tourist attractions. Delight in hidden wonders of the Renaissance in the most unique Vatica […]
St Peter's Basilica and Necropolis Tickets

This is where the remains of Saint Peter himself are buried. In the basilica correct you'll see priceless work of arts by Michelangelo, Bernini and Raphael, and delight in fantastic views o […]
Skip The Line Tickets: Vatican Gardens & Museums and Sistine Chapel
Via del Governatorato 0.19 km

Initially constructed in the 13th century - the Vatican Gardens are almost 23 hectares of flower fields, sculptures, fountains, and even some medieval buildings. Legend has it that when the […]
Ticket Pack: Papal Palace, Vatican Museums, Sistine Chapel and Vatican Gardens
Via del Governatorato 0.21 km

Tiqets is one of the official partners of Vatican and entitled to offer this ticket to you. In order to enjoy your Saturday, you can start the day with Vatican Museums and Sistine Chapel in […]
St. Peter's Basilica & Pope's Treasury Museum Tour

Skip the line and enjoy your moments in one of the most important Catholic churches in the world with your audio guide. Here, you will have the chance to enjoy Michelangelo’s best sculpture […]
Vatican Gardens, Sistine Chapel and St. Peter's Guided Tour
Via A. Canal 0.3 km

The access-all-areas tour is a wonderful journey through centuries of art, with sneak peaks at locations typically near to the public.
Papal Audience Tickets and Presentation with Guide
27-29 Via Paolo VI 0.35 km

With an individual audio headset, you'll make sure to hear everything the guide states above the noise of the crowd. While the weekly audience with the pope draws large numbers, this ticket […]
Early Entry Vatican Museums and Small-Group Tour with St. Peter’s and Sistine Chapel

Get in through a reserved entrance to avoid the lines, and stay a step ahead of the big crowds on this carefully prepared route that ensures you take advantage of your time. Get in the UNES […]
Vatican Museums and Sistine Chapel Tickets with Audioguide
5.01
106 Viale Vaticano 0.46 km

This will be the fastest option offered that will also make it available for you to make your own plan. Additionally, audio guidance is also included. Spend some time to explore sarcophagi, […]
12...17