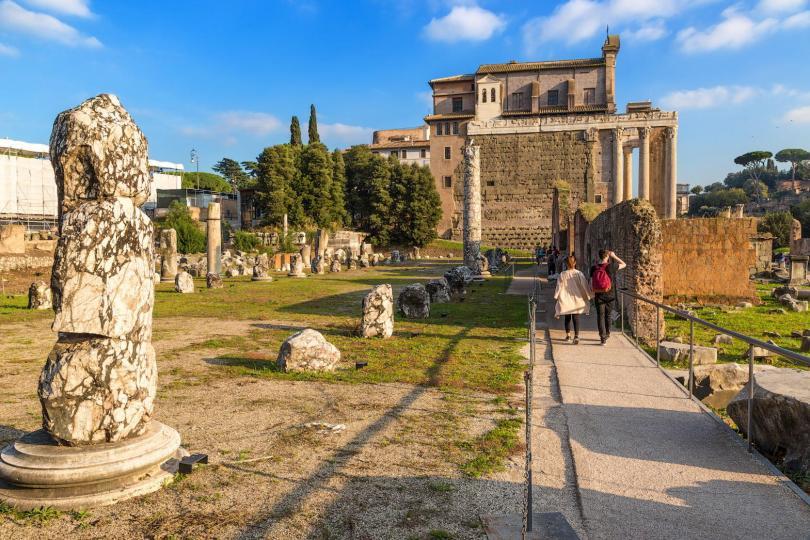 The Basilica Aemilia (Basilica Emilia) was founded in 179 B. C. by Emilius Lepidus and Fulvius Nobilior. It was one of the most splendid buildings of the Roman Forum.

The basilica, which was enlarged by the consul Marcus Aemilius Paulus in 78 BC and then renovated under Augustus after a fire, is approximately 100m. in length and probably served as an exchange or courtroom. The Basilica Aemilia takes its name from the aristocratic family who rebuilt it in the 2nd. century A.D. 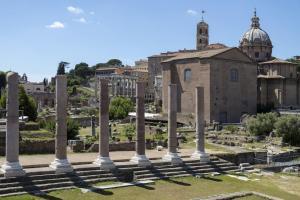 Remains of Basilica Emilia (Basilica Aemilia) in the Roman Forum in the city of Rome, Italy. 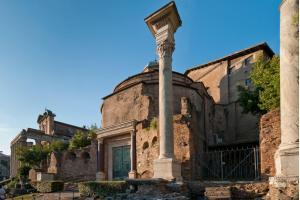 Ruins of the Basilica Aemilia at Roman Forum, Rome, Italy 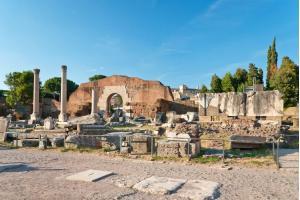 View at the Basilica Aemilia ruins at the Roman Forum, Rome, Italy

This type of structure was adopted by the Romans from the Greeks – the Greek word »basilica« means »king’s hall«. It consists of three elongated, rectangular spaces with a common, flat ceiling and separated by columns, with a recess (apse) at one end for the chair of the market supervisor or judge. With a few changes, the basilica with a nave and two aisles became the generally accepted design for Christian churches.

On the right as you enter the Roman Forum, this now heavily ruined basilica was said by Pliny to have been one of the world’s three most beautiful buildings. It illustrates how buildings in the Forum changed roles over the years.

In the 5th century B.C, this area was a row of butcher shops, taken over in time by the city’s moneylenders. In 179 BC the Censor Marcus Aemilius Lepidus, son of Aemilius Paulus, built the Forum’s second basilica over the shops, such acts of private enterprise being rewarded with the right to have the building named in one’s honor. The moneylenders were allowed to stay, concealed behind a special portico. 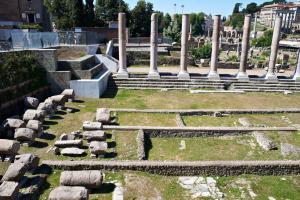 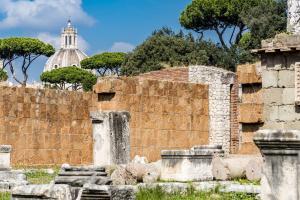 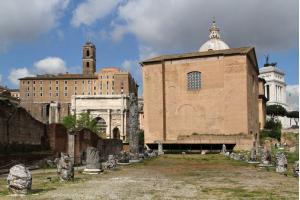 Ruins of Basilica Aemilia. The Basilica was 100 meters long and about 30 meters wide. Along the sides were two orders of 16 arches 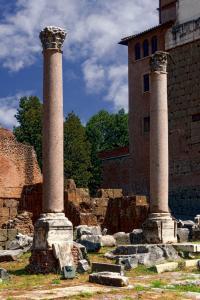 The Basilica Aemilia in the Forum Romanum is one of the most important buildings of ancient Rome due to its location, size, and architecture – Rome, Italy

During Alaric’s attack in 410 A.D, some of the moneylenders supposedly stayed in the basilica to do business with the invading Goths. You can still see bronze coins fused into marble pavement, perhaps the result of the Goths’ violent dislike of the bankers’ reception.

After the Basilica Aemilia had been severely damaged by fire in the 3.nd. century A.D. It was rebuilt in its old form, but it finally burned down at the beginning of the 5th century A.D. In the succeeding centuries, that the decline of the Forum accelerated, one of the causes being the terrible earthquake of 851 at the time of Pope Leo IV. Nor were the Romans of the tenth century in such spiritual, political, or economic circumstances as to worry over the condition of the Forum.

In 1084 the Normans, called by Gregory VII who was besieged by Henry IV (of Italy) laid the city to waste, sacking and burning with devastating fury. Some years later, a French writer said: « Rome exists no longer; some of it still stands, some has fallen, but what remains cannot be restored and what is fallen cannot be rebuilt ». It was the end of the Forum. Much of the building, like many of Rome’s treasures, suffered at the hands of the Goths and similar invaders, but the bulk of the basilica was lost during the Renaissance when a large part of its fabric was looted as building stone.

Colosseum to the Basilica Aemilia

Basilica Aemilia is set in the  Roman Forum, 0,65 km from (8 min walk) from Colosseum.