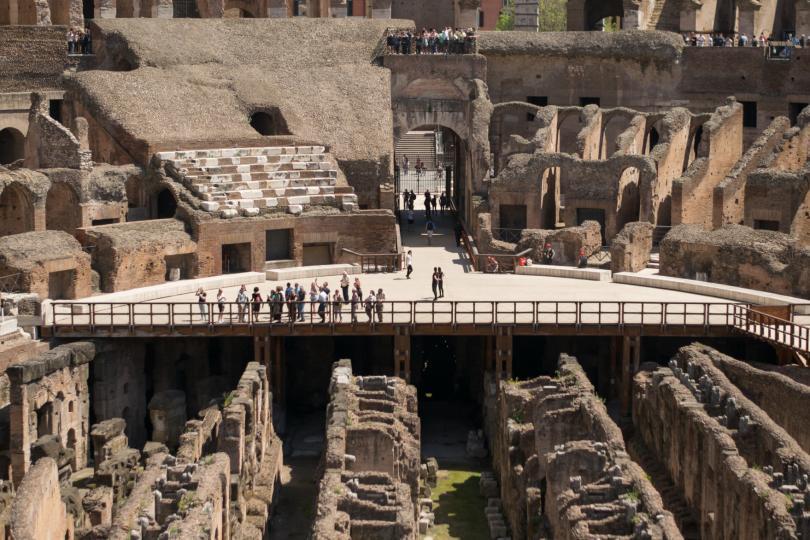 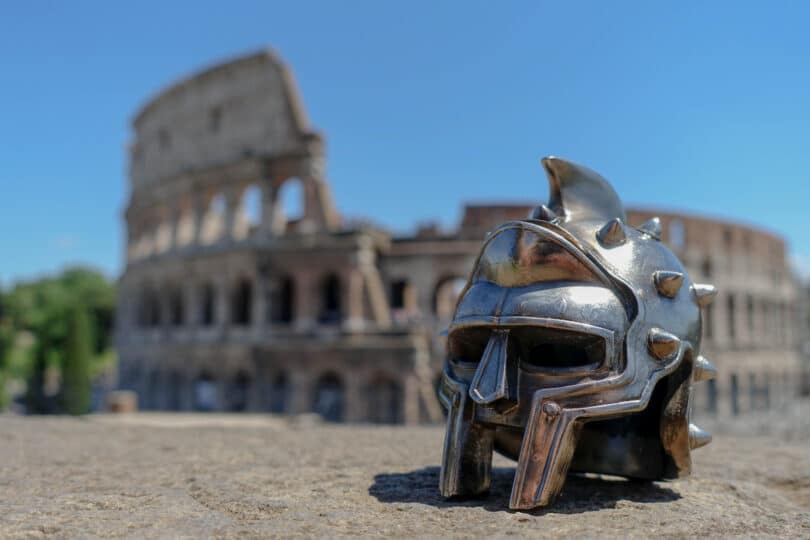 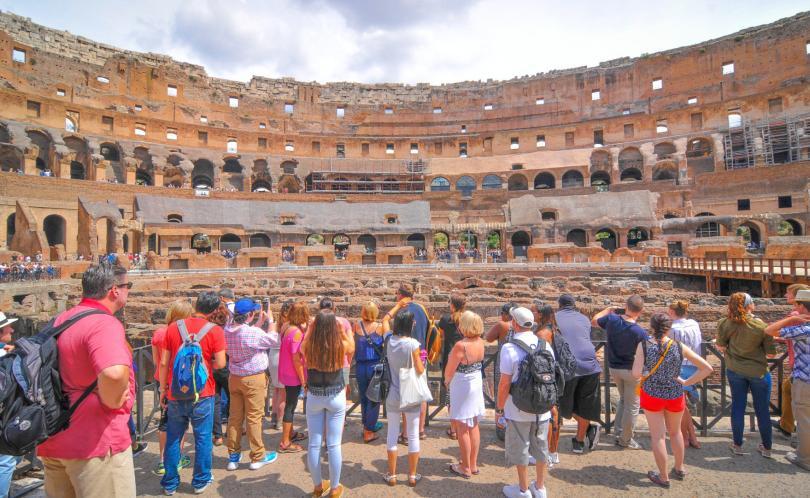 Built in the middle of the broad valley between the Palatine, the Esquiline and the Caelian hills, the largest of the monuments of ancient Rome became quickly and inevitably the “Colossus” and was therefore known as the Colosseum.

The building was undertaken by the emperor Vespasian, of the Flavian family, between A.D. 70 and 75. and was inaugurated by his son Titus in A.D. 80 with a series of shows that lasted for 100 days. It stood on the site where Nero had excavated a lake in the garden of his Golden House. The undertaking aroused tremendous enthusiasm among the citizens, who regarded the construction of its “45- 50.000” seats as the restitution of public ground which had been usurped for private purposes by the tyrant Nero.

There were numerous entrances, broad corridors, stairways, carefully planned passages of access and six tiers of seats so that spectators could go to the shows in comfort. The shows consisted essentially of gladiatorial combats and wild beast nunts. An elaborate complex of passages and rooms underneath the arena provided storerooms for stage properties and cages for the animals which could be brought up to the arena, and produced at the appropriate moment by an ingenious device of trapdoors and pulleys.

An enormous awning drawn by ropes that were tied to beams fixed in the upper external cornice of the amphitheatre and were manoeuvred by a special service corps of sailors, provided shade for the spectators; and scents were sprayed into the auditorium to mask the smell of blood and the stench of rubbish.

Violent earthquakes, the worst of them in the 13th and 14th centuries, shook down a considerable part of the outer arcade and for many years the great heap of fallen material provided a quarry for the builders of the palaces and churches of the Renaissance.

Take pleasure in direct access to the Colosseum’s arena floor by the Gladiator’s Entryway, without the long lines. Discover the amphitheater at your own pace.

May be reached from the Capitol by going down to the right of the Senator’s Palace, or by skirting the Victor Emmanuel Monument and taking Via dei Fori Imperiali. Emmanuel Monument and taking Via dei Fori Imperlali. The term Roman Forum is used to indicate the place assigned in ancient Rome for the meetings of the people; here public, and above all private business was contracted, public debates were held, and here too, justice was meted out by the great Roman lawyers, appropriately called forensic.

The Forum was the city’s most important political and social centre; it was the very cradle of Roman civilisation which gave its orders and instruction to ail the peoples it subjected. Originally the area where the Roman Forum was built, was swampy and unhealthy owing to the stagnation of the waters flowing into it from the Cloaca Maxima. After the place had been drained, it became the site of trade between the Romans and the inhabitants of the surroundings areas. As the city’s life became established, the place gradually took on the character of an organised centre, and at that time the “tavernae” (today called shops) and temples were built. Thus it slowly lost its use as a market place and became the centre of political and juridical life, as previously mentioned.

Owing to the steady development and growth of Rome and its Increasing importance on the social, commercial and especially the political plane, the Roman Forum soon became too small, and thus, especially in the Republican period, other Fora were established, that is to say, other meeting places, consisting of large areas or squares, surrounded by important public buildings, and generally comprising also a temple or a building commemorating some noteworthy historical event.

The Roman Forum suttered considerable damage from the Barbarian invasions, in addition to that from losses due to plundering by fanatic lovers of antiquities. A great deal of material was also carried off for use in fortifications or the construction of new buildings, so much so that it soon fell into a state of complete neglect and was used for assembling cattle (whence it is still known by the name of “Campo Vaccino”). In the 18th century excavations were started again, which brought to light remarkable artistic treasures, although in sadly damaged condition.

Skip the lengthy queue for the entry-ticket line and go straight to the fast lane entry for safety and security checks. After going into the Roman Colosseum at your assigned time, experienc […]
Full-Day Tour: Colosseum, Roman Forum and Vatican City

Your guide will inform you everything about this world's biggest amphitheater including the gladiator traditions and fights. You will also have a chance to learn more about the complex Roma […]
Colosseum Priority Entrance with Audio-Video Guide, Roman Forum and Palatine Hill
1 Piazza del Colosseo 0.07 km

This three-in-one ticket is the very best method to get into the spirit of the magnificent Roman Empire. Switch your digital coupon for an audio guide and a printed ticket total with timesl […]
Colosseum Last Minute Tickets
1 Piazza del Colosseo 0.07 km

If you value your time in Rome, this exclusive entrance ticket is simply the one that you need to reach the best experience. With this ticket, you will be able to explore 2nd and 3rd floors […]
Colosseum Priority Entrance + Roman Forum & Palatine Hill
1 Piazza del Colosseo 0.07 km

Enter into the Colosseum, Palatine Hill, and Roman Forum in main Rome through the fast track entryway with a combined package. Take pleasure in a problem-free experience at your own pace. M […]
Skip the Line Colosseum with Arena Floor + Professional Guided Tour
1 Piazza del Colosseo 0.08 km

If you have actually never ever been on a Segway in the past, you remain in for a treat. It's a fun method to navigate the 7 hills of Rome, and your overview will show you all one of the mo […]
Ancient Rome and Colosseum Family Tour
1 Piazza del Colosseo 0.1 km

Discover life in the Eternal City of the Roman Empire, and get awesome views of the Circus Maximus. See the main monuments of Roman Empire on a 3-hour guided trip, with skip-the-line access […]
Colosseum Underground Tour with Arena and Roman Forum
41.891972, 12.490689 0.11 km

from €95.00 EUR
Available: No available date
Duration: 2.5 Hours
353 Reviews
Organized by: Tour in the City