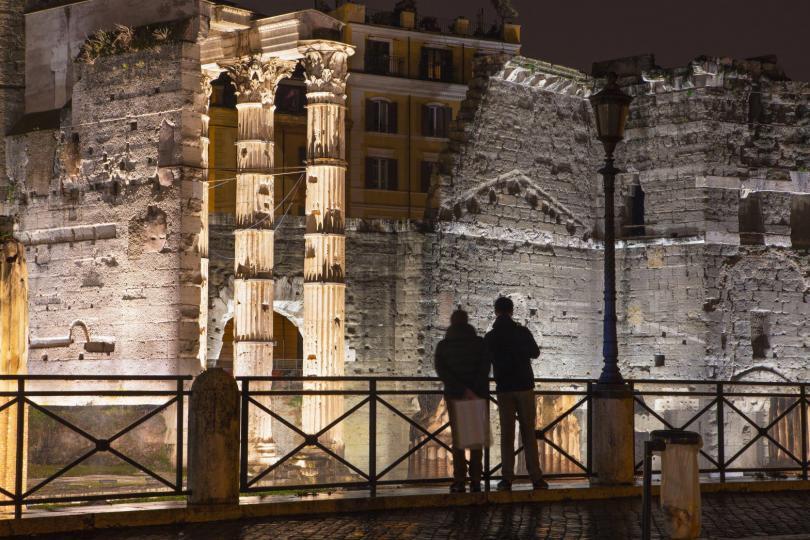 Before the Battle of Philippi in 42 B.C., in which Brutus and Cassius, the murderers of Augustus’ adoptive father Gaius Julius Caesar, were killed, Augustus vowed to built a new forum. At the Battle of Philippi were defeated Caesar’s assassins, Cassius and Brutus. Augustus kept his vow and built the Temple to Mars Ultor, which became the centre of a new Forum. Forum of Augustus, dedicated to the Mars Ultor (war god, called the Avenger).

Lights of different colors, projections on the ruin wall, amazing music and Ancient Rome. You come, you saw, you got entertained! While you are on your feet on Roman stairs, astonishing mul […]

Caesar died before succeeding in carrying out his revolutionary town plans, which included the deviation of the Tiber, but with the construction of the Curia and the Basilica Julia he did provide the Roman Forum with its basic plan. Above all he built the Forum of Caesar, and set an example for the policy of tying one’s name to the creation of a forum space which continued throughout the period of the Empire.

Caesar’s urban policy was taken up, albeit in a less revolutionary way, by Augustus. With the construction of the Forum of Augustus and the Temple of Mars Ultor, the Roman Forum with its series of monuments celebrating the gens Iulia can be considered as completed. 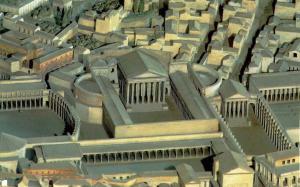 the remains of the Temple of Mars Ultor in the Forum of Augustus and, below, a reconstruction of the structures.

Work on the new- forum went on for almost forty and it was inaugurated in 2 B.C. The function of this monumental space was to provide greater space for the crowd than the Roman Forum and Caesar’s Forum. But it became above all a centre of display designed to glorify the emperor, who is represented on a majestic triumphal chariot in the middle of the square. “I found Rome brick and left it marble”, was to be the Emperor’s famous boast. 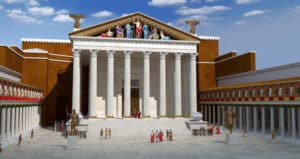 The Forum of Augustus had a distinctively military character: it was here that the senate would meet to declare war or peace and here were erected the statues of victorious generals, who were no longer awarded a triumph as this was now the exclusive privilege of the emperors. In this way the forum’s original allusion to vengeance on the assassins of Caesar was extended to include the defeat of all Rome’s enemies.

The Forum of Augustus became in the early middle ages a sort of quarry: the fine materials of its buildings were stripped and re-used elsewhere.

Temple of Mars Ultor (The Avenger)

At the centre of the forum, surrounded by arcades, is the Temple of Mars Ultor (the Avenger) which Augustus dedicated in the year 2 B.C. as a memorial to the battle of Philippi. The temple housed several of Caesar’s possessions, including his sword.

This podium temple, of which three columns are still standing, was originally a peristyle temple with eight 15.3m.- high Corinthian columns on each side. It housed statues of Mars and Venus, of which the pedestals survive. 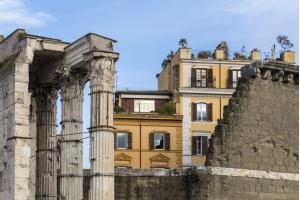 Temple of Mars Ultor in the Forum of Augustus

Statues of famous people were erected in the portico, and a colossal statue of Augustus, which was almost 14m., tall stood in the Aula del Colosso. A fire wall secured the precinct, where numerous ceremonies of state were held under Emperor Augustus. Tiberius added a triumphal arch for Drusus and Germanicus to the forum. In about 1200 the Knights Hospitaller used the ruins for their palaces, as did the Knights of St John of Rhodes and Malta at a later date. Today, the former exedra and the antiquarium are the priory of the Knights of Malta.

Forum of Augustus set in the Imperial Forums, 0,7 km from (9 min walk) from Colosseum.