Trajan’s Forum was built by the Emperor Trajan between 107 and 113 AD. It was financed by the immense wealth from the conquest of Dacia (modern Romania). Work was supervised by the most famous architect of the day, Apollodorus of Damascus.

Today all too little remains, hardly suggesting a complex that for centuries was held in awe as one of the architectural wonders of the world. Broken columns and wistful piles of stones are the only monuments to the temple of Trajan, once among the city’s mightiest.

Since the space between the existing forum and the hillsides was already taken up by buildings, Apollodorus had to cut into the ridge between the Quirinal and the Capitol. The new complex was truly immense (300 x 85 metres). In order to create Trajan’s Forum, the high ground which joined the Capitol to the Quirinal hill was levelled and whole streets of houses were swept away, (circa 61 million cubic meters of earth and rock was moved to make way for the Trajan’s Forum) thereby completing the great design for the centre of the city and providing a link between it.

A great open space with two porticoes, two huge hemicyclcs, and a triple arch with three gates leading into the Forum of Augustus was the central feature of Trajan’s Forum. Against the background of the forum rise the remains of the Basilica Ulpia, which contained important state archives and two libraries designed by Apollodorus, one utilized to store records in Latin and the other for those in Greek, a reflection of the empire’s bilingualism. The books, both rolls or bound codices, were kept in wooden presses set in the recesses still risible in the walls. The books were carefully catalogued and cared for by librarians, whose tasks included protecting them from damp.

Apollodorus (Apollodorus of Damascus)
Apollodorus (Apollodorus of Damascus). Greek architect and sculptor, 2nd century ad. Worked in Rome in the first half of the century, especially on the great complex of the Forum of Trajan, and the Ulpian Basilica. According to a recent hypothesis, he may be the sculptor of the reliefs on Trajan’s Column, and of some slabs which were originally in the Forum of Trajan and later incorporated into the Arch of Constantine. Banished from Rome Hadrian, and condemned to death.

Between the libraries stood the splendid spiral column whose reliefs celebrated the exploits of Trajan in the conquest of Dacia (today Romania). An inscription on the base explains that its height (38 m. without the statue) corresponds to the height of the hill which was dug away at this point. The emperor himself was buried in the interior of the base. 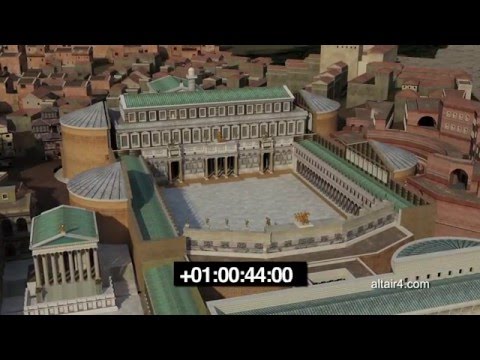 The Emperor Constantius II Sees the Forum of Trajan for the First Time (in 357 AD)
“But when Constantius II reached the Forum of Trajan, a complex unique in the world, and, in our judgment, worthy the admiration of the gods, he stopped amazed, considering all around him those gigantic structures, which words cannot describe or mortal hands again build. So renouncing all hope of attempting anything of the kind, he said he wanted to imitate only Trajan’s horse, set in the middle of the atrium, and with the emperor on its back. And prince Ormisda (..), standing beside him, replied with pleasing wit: ‘First, emperor, command the construction of a stable like this, so that the horse you wish to have made can find as appropriate a setting as that we have before our eyes.” Ammianus Marcellinus, Histories, XVI, 10, 15-16

The extensive clearances of the 1930’s brought to light only part of the forum: most of the area is still concealed under the modern roadway and gardens. In the square of Trajan’s Forum, there was a colossal bronze statue, the Equus Traiani, depicting the emperor on horseback. A foundation hole and travertine base from the equestrian group, which came to light during major excavations done in 1999 in the area of the Fori Imperiali, finally confirmed its existence.

Distance to the Colosseum – Walking:

Trajan’s Forum set in the center of Imperial Forums, 0,8 km from (10 min walk) from Roman Colosseum.