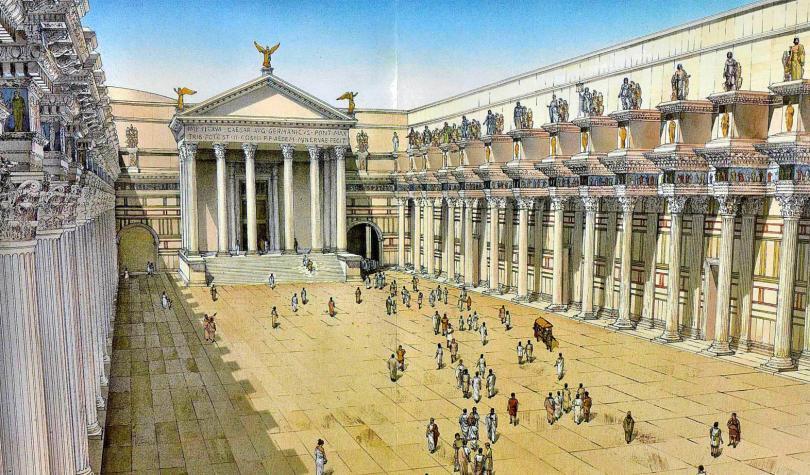 Construction of the Forum of Nerva (which is also known as the Forum Transitorium), was decided by Domitian to give monumental form to the vacant strip of land at the point where the two existing forums met. 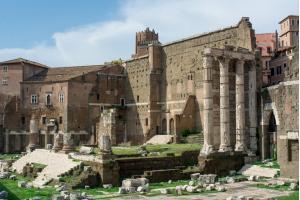 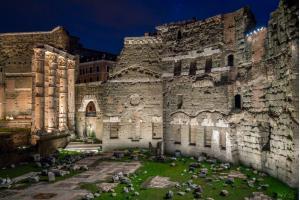 The northern wall of the Forum.

The emperor died shortly before the work was completed and it was finished by Nerva in A.D 97, at the time aged sixty-six, who gave it his name.

The new forum, 120 meters long and 45 wide, allowed no space for the construction of a new colonnade, so the portico of the Temple of Peace was used. At one end a temple was dedicated to Minerva: only its massive basement survives. (Minerva, the ancient Etruscan goddess of crafts, was originally equated with Artemis. Later, as a goddess of wisdom, she became the counterpart of the Greek Athene.). 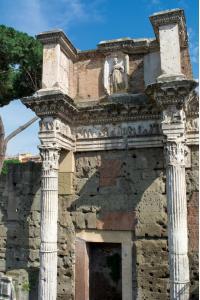 Beyond the temple and close to the enceinte wall are two enormous Corinthian columns, the so-called Colonnacce. In the attic between the columns is a high-relief of Minerva, after an original of the school of Skopas. In the rich frieze of the entablature Minerva (Athena) is seen teaching the arts of sewing and weaving and punishing Arachne, the Lydian girl who excelled in the art of weaving and had dared to challenge the goddess. In front of the Colonnacce is a section of the Argiletum.

During the Middle Ages and the Renaissance, the Fora were pillaged for their building material and robbed of their marbles and bronzes, and the area was later built over. The temple was still standing at the beginning of the 17 th c., when it was pulled down by Paul V to provide marble for the Fontana Paolina on the Janiculum. Drawings from the 16th century show us that at that time the temple was still standing and the dedicatory inscription mentioning Nerva could still be deciphered on the architrave. 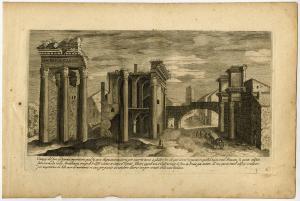 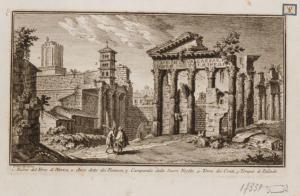