Church of the Gesù, down the Corso from Sant’Andrea, in Piazza del Gesù, was the model for Counter-Reformation churches all over Europe. This church is the first example of the style later called “Jesuit” and consists of a single large nave flanked by deep chapels and transepts, a large apse, and a cupola over the crossing. It was built in this way so as to combat Protestantism by word of mouth, that is by building a church where all could listen to the priest speaking from the pulpit.

Construction of the main Jesuit church was initiated by Ignatius of Loyola, who in 1540 founded the Society of Jesus, a religious order that spread quickly through the Catholic countries of Europe and organized the Counter-Reformation of believers loyal to the pope. 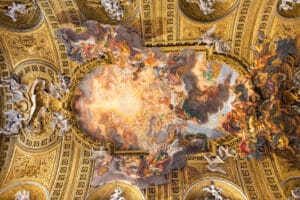 Cardinal Alessandro Farnese, whose coat of arms with lilies appears in many places in the church, commissioned the architect Vignola to plan and construct the building; Church of the Gesù (Il Gesù) was completed by members of the order. 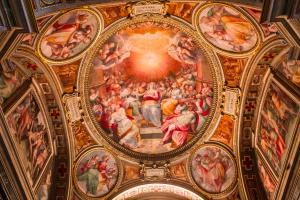 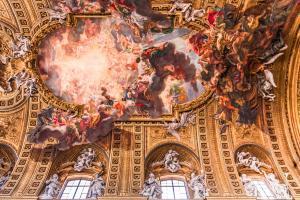 The fundamental new idea was to construct a hall church without aisles, which was familiar from ancient Roman, early Christian and medieval architecture, and to crown it with a dome at the intersection of the nave and transept. The façade designed in 1573 by Giacomo della Porta has both Renaissance and Baroque elements. The two statues in the alcoves represent Ignatius of Loyola, founder of the order, and St Francis Xavier, a missionary in Asia who is greatly revered by the Jesuit order.

Interior of Church of the Gesù

Rich decoration, multi-coloured marble, sculptures, bronze statues, stucco decorations, gilding and frescoes set the tone of the interior, which exhibits the characteristic style of the Counter-Reformation: every believer was to participate in the religious spectacle. 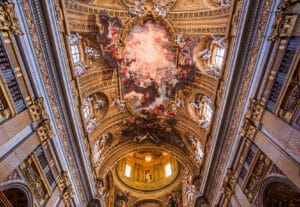 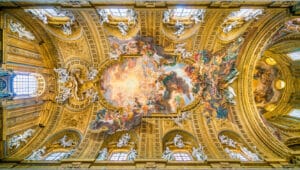 The vault with the Triumph of the Name of Jesus by Giovanni Battista Gaulli, in the Church of the Jesus in Rome, Italy.

The High Baroque ceiling fresco by Baciccia in the barrel vault of the nave depicts the Triumph of the Name of Jesus, thus simultaneously emphasizing the important missionary achievements of the Jesuit order. The altars and tombs for saints of the Jesuit order deserve particular attention: the altar of St Francis Xavier, erected in 1674-1678 to designs by Pietro da Cortona, is in the right-hand transept. To the right of the 19th-century high altar, a bust created in 1622 by Bernini honours St Robert Bellarmin. The left-hand transept is home to the altar and tomb of St Ignatius; it was made in 1696-1700 by the Jesuit Andrea Pozzo. The modern statue of the saint is a copy of the silver statue by Pierre Legros, which Pope Pius VI had to melt down in order to pay reparations to Napoleon under the terms of the Treaty of Tolentino. 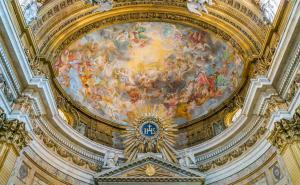 The apse in the Il Gesu, Rome, Italy. 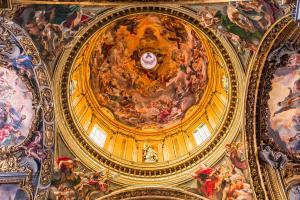 Interiors and architectural details of Church of the Gesu.

Not only art historians appreciate Il Gesù: the popular verdict was that, by donating the money for its completion, Cardinal Farnese had possession for the three most beautiful things in Rome: the church, the family palazzo and his daughter.

Colosseum to Church of the Gesù:

Church of the Gesù set in the Piazza del Gesù, 1,4 km from (18 min walk) from Colosseum.