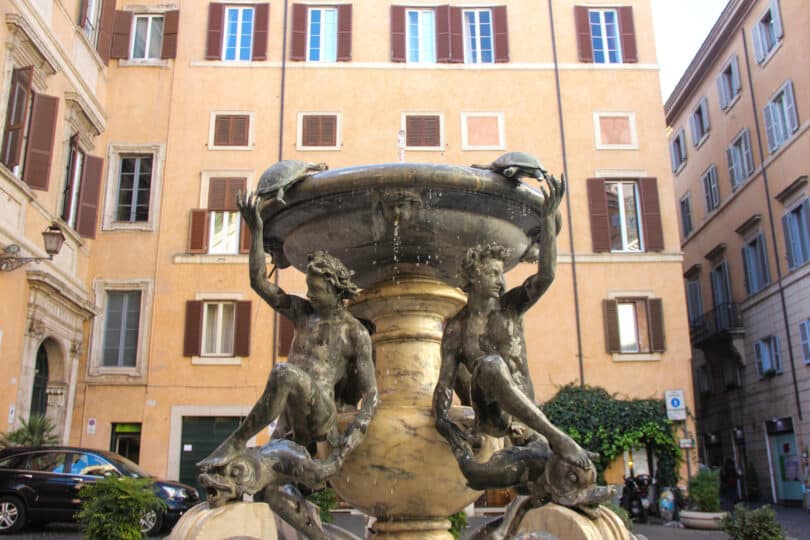 »High climbs the jet and, falling, fills / up to the brim the marble  rounds / that overflow in veils and frills, / into a second basin’s grounds; / the second, now too rich, forsakes, / its waves and on the third one spills / and equally it gives and takes / and stirs and stills.«
The graceful Fountain of the Tortoises (Fontana delle Tartarughe in Italian), »tortoise fountain«, is a beautiful example of the fountains of Rome described in 1882 by Conrad Ferdinand Meyer in the poem The Roman Fountain. 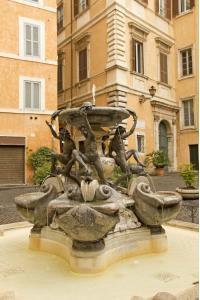 The Fontane delle Tartarughe (The Turtle Fountain) is a fountain of the late Italian Renaissance, located in Piazza Mattei, in the Sant’Angelo district of Rome, Italy.

It was created from 1581 to 1584 by Taddeo Landini, a sculptor from Florence, according to sketches by Giacomo della Porta. A foundation decorated with four sea shells rises from the basin. Four youths – slim, playful lads with uplifted arms – carry a large bowl over their heads. The tortoises sitting on the edge of the bowl were added in the 17th century.