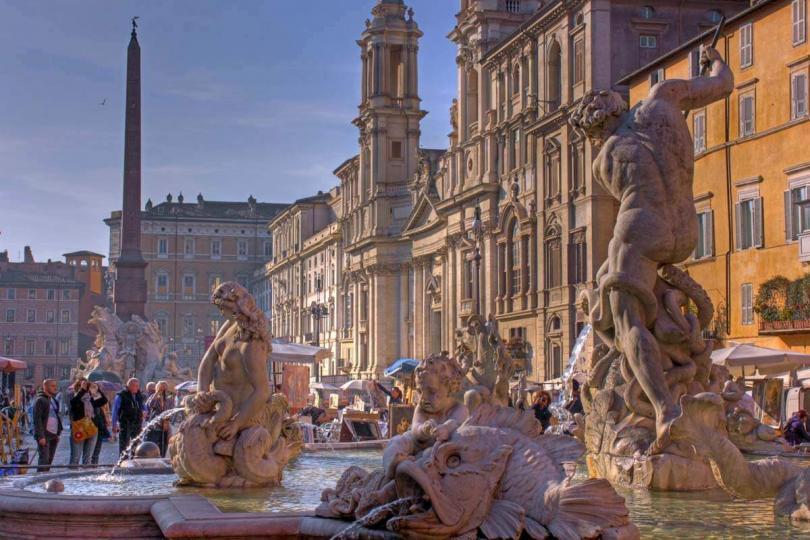 No other Roman piazza can rival the spectacular Piazza Navona, beloved by both Romans and visitors. The Baroque ensemble of Piazza Navona is always full of life, a moving stage for musicians, magicians, fast portrait artists and souvenir vendors. It has lots of kitsch, drama and a touch of carnival at mosphere, but sometimes also serves as a beautiful scene for concerts or a place for demonstrations.

The irresistible chocolate truffle ice cream, tartuffo, from Caffe Tre Scalini is legendary, and film buffs take their aperitifs a few steps further on in La Dolce Vita, surrounded by photos from Fellini’s cult film of the same name. 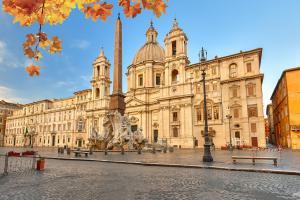 Piazza Navona is one of the most important examples of continuity between ancient and modern Rome, and a fine example of urban design. Its elongated rectangular form, with one of the shorter sides curved, exactly repeats the design of the Stadium of Domitian. This was constructed in about 86 AD for the Greek athletic competitions. Measuring 275 metres long by over 10 in width, it had two tiers of seating which held up to three thousand spectators.

Stadium of Domitian is approximated to have actually been amongst the biggest stadium known from Classical times, with a capability of about 30,000 viewers. When the Roman Colosseum was damaged by fire under rule of Macrinus in A.D. 217, the stadium temporarily organized gladiatorial battles. Shops and buildings now occupy the spaces where tiers of stone bleachers once stood.

The name of Piazza Navona, is derived from the athletic games, the ‘Agoni Capitolini’ held here after the stadium was inaugurated in AD 86. In the Middle Ages the piazza was called the ‘Campus Agonis’; hence ‘agone’, ‘n’agona’, and ‘navona’. Festivals, jousts, and open-air sports took place here, and it was also used as a market place from 1477 until 1869.

In the Baroque period, the square was adorned with magnificent palaces and churches by Borromini, to which Bernini’s imaginative water feature was added. 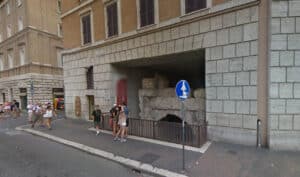 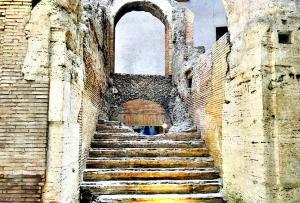 Ruins – Stadium of Domitian under Navona 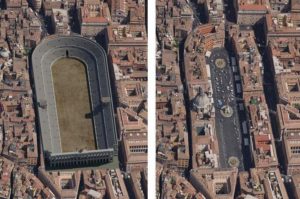 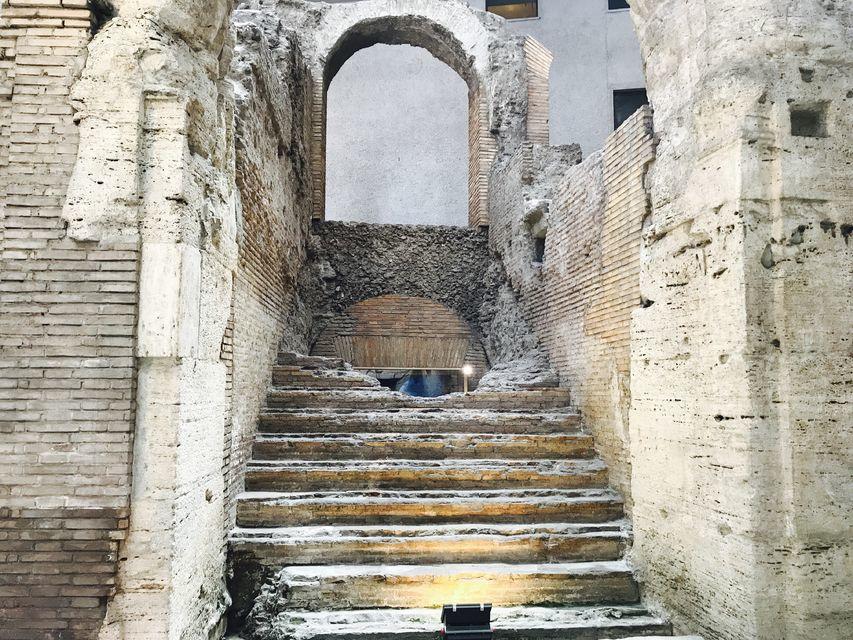 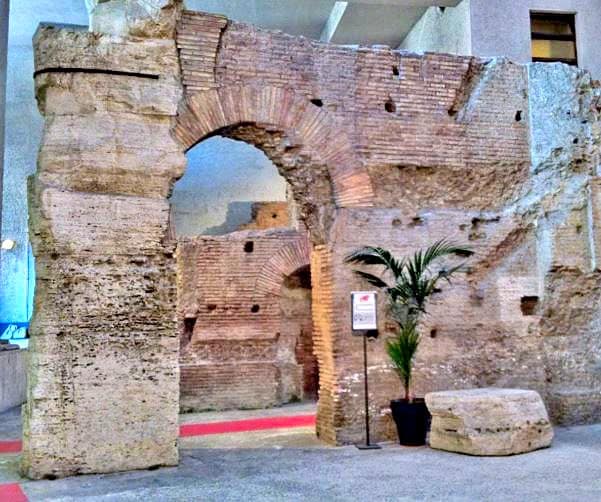 Ruins – Stadium of Domitian under Navona

Bernini had actually not even been approved to take part in the competition for the Fountain of the Four Rivers. Nevertheless, he produced a design which the sister-in-law of Innocent X placed where the pope could not avoid seeing it. 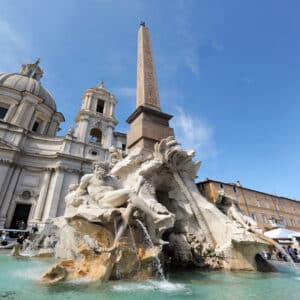 He was so impressed that the commission was awarded to Bernini, who designed a masterly moving waterscape between 1647 and 1651. Cliffs rise from a large basin and support an obelisk surrounded by animals and plants. Personifications of the Nile, Ganges, Danube and Rio de la Plata – the rivers then regarded as the largest on the four known continents – are seated on the four corners, accompanied by the flora and fauna of their continents.

Panoramic View of Piazza Navona. The iconic square is one of the most visited landmarks in the world and a top tourism destination in Italy.

The fact that the Nile has his head covered is probably a reference to the fact that its source was not yet known. Malicious observers – mindful of the fierce and not always dignified competition between the two star architects Bernini and Borromini.

The third of Piazza Navona’s fountains, at the piazza’s southern end, the ‘Moor Fountain’ is the work of Giacomo della Porta (1575). The central figure of the so- called Moor (actually a marine divinity) grappling with a dolphin was added by Antonio Mori, from a design by Bernini. The encircling tritons are 19th-century copies of 16th-century originals. 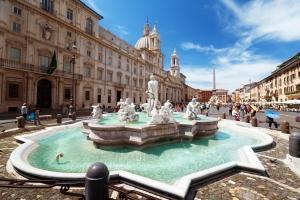 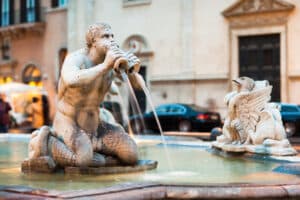 Northward view of the Piazza Navona with the Fontana del Moro (the Moor Fountain) and the Sant’Agnese in Agone church at dusk – Rome, Italy 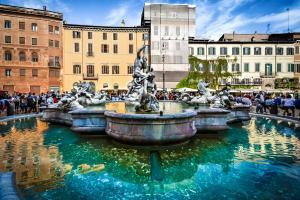 Tourists crowd around the The baroque Fontana del Moro or Moor Fountain.

At some point, every shopping trip in Rome ends up in the magic triangle between  Piazza di Spagna, Piazza del Popolo and Via del Corso, where most of the famous shopping streets of the city are located.

A huge antique book market has taken over the pedestrian subway between Largo Chigi and Piazza Colonna – browsers can find rarities going back to the 19th century.

After a long period of neglect, the Roman address of Johann Wolfgang von Goethe, Via del Corso 18, is open once again. In 1786 the poet stayed in the house of his friend Heinrich Tischbein, where visitors can now learn about Goethe’s happy days in Rome Opening hours: Wed-Mon 10am-6pm, tel. 06 32 65 04 12, www.casadigoethe.it). 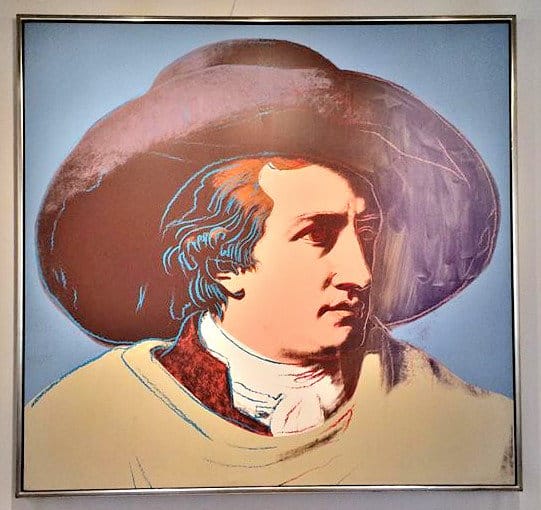 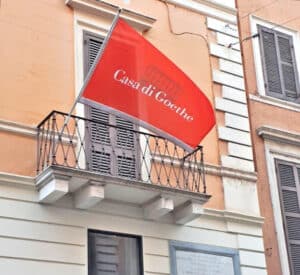 Piazza Navona set in the center of Rome, 2,1 km from (21 min walk) from Colosseum.

Coin Image – Description: The stadium of Domitian on a coin minted by Septimius Severus in 202-202 AD to commemorate the return of the emperor and his son Caracalla as well as the latter’s marriage to Plautilla. Games to celebrate the marriage were held in the stadium. British Museum, London.