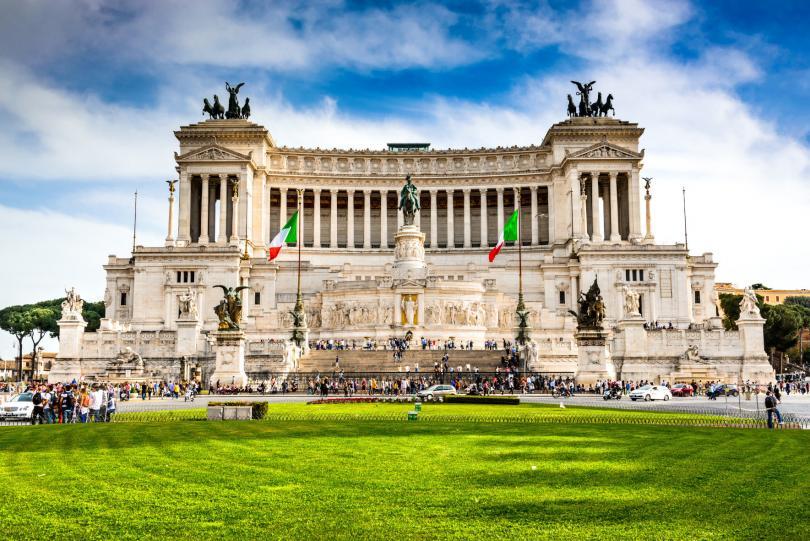 Piazza Venezia, it is the only broad boulevard in city’s historical center; the Via del Corso, the Via dei Fori Imperiali, and the Via del Teatro di Marcello are among the thoroughfares that converge there.

Piazza Venezia was transformed at the end of the 19th. century. To make way for this piazza, medieval towers and Renaissance churches and palaces were demolished, and the Imperial Forums, which had been buried for centuries, were uncovered. These areas, built by Julius Caesar and the emperors Augustus, Vespasian, Nerva, and Trajan, were extensions of the Roman Forum.

The piazza was the location of public speeches given by the fascist dictator Mussolini to crowds of his supporters in the 1930’s-1940’s.

Rome’s traffic hub is dominated by the mighty The National Monument of Victor Emmanuel II (Monumento Nazionale a Vittorio Emanuele II in Italian), which the Romans also like to call “the typewriter”. 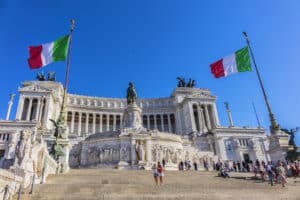 The gigantic snow-white national monument was built between 1885 and 1911 to plans by Giuseppe Sacconi in order to celebrate the unity of Italy achieved in 1870 and to honour the memory of the first Italian king, Vittorio Emanuele II (1878) whose equestrian statue was made out of bronze. 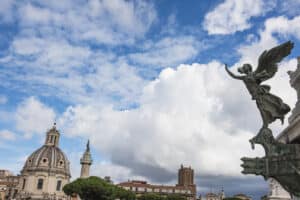 View of Rome from the national monument of Vittorio Emanuele II.

The huge monument is 70m/230ft high, 135m/443ft long and 130m/427ft wide, but opinions about its beauty vary widely. The »Altar of the Fatherland« is halfway up and, since 1921, the Tomb of the Unknown Soldier with eternal lamps, flags and coats of arms has been at the centre. 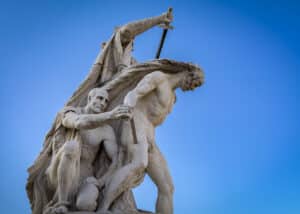 A statue in front of Altare della Patria (Altar of the Fatherland) monument in Piazza Venezia. 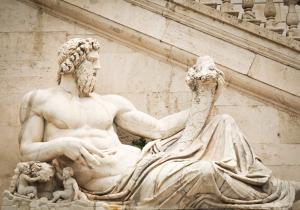 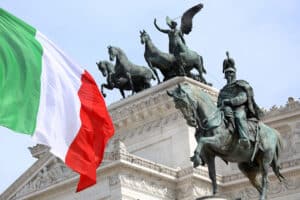 This Museum, which was inaugurated on October 2nd, 1970 on the occasion of the centenary of the plebiscite held to decide whether Rome should be Capital of Italy, had already been planned as early as 1906, when the Comitato Nazionale per la Storia del Risorgimento (National Commitee tor the History of the Risorgimento) was set up.

All the material gathered was arranged in part of the monument to Victor Emanuel IV in five chronological sections from the second half of the eighteenth century up to the First World War. (Opening Hours: Tue-Sun 9am-1.30pm).

On the west side of the piazza is Palazzo Venezia, which, in its present form, was started in 1451 by Cardinal Pietro Barbo, later Pope Paul II, was continued by several architects and completed in 1491. This fortress-like Renaissance palace houses the museum of the State Institute for Archaeology and Art History.

It's likewise a palace and former house of the popes so anticipate luxurious decor and spectacular Catholic style amidst the numerous paints, tapestries, statues, porcelains, precious jewel […]

In addition, various art exhibitions are held here. As the name indicates, this elegant palace belonged to the Republic of Venice from 1594 to 1797; it then became the Austrian embassy, and, during the Fascist era, was the government seat of Mussolini – from the central balcony, the Duce made speeches full of pathos.

The museum was partially opened in 1921 and was finally organised in 1936. It houses paintings from the thirteenth to eighteenth centuries, marble and carved-wood sculpures, bronzes, terracottas, pottery, china, silver, cloths, seals, medals, glassware, tapestries, enamels, etc.

According to tradition, the church was founded by Pope Mark in 336 in honour of the evangelist Mark. Excavations in 1948 led to the discovery of the outer walls of Pope St Mark’s church under the pavement of the present one.

A serious fire caused the fourthcentury church to be rebuilt in the fifth century. Towards the end of the eighth century, Adrian I (772-795) restored it. Pope Gregory IV (827-844) rebuilt it once again, enriched the apse with mosaic, and brought the remains of the Persian martyrs Abdon and Sennen from the Ponziano Cemetery and buried them near the high altar, from where they were recently transferred to the crypt. The basilica achieved its present form in the middle eighteenth century as a result of the restorations of Cardinal Querini ( 1 740- 1750). 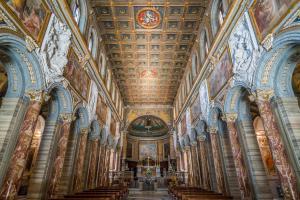 Basilica of San Marco near Venezia Palace and Campidoglio in Rome, Italy. (2) 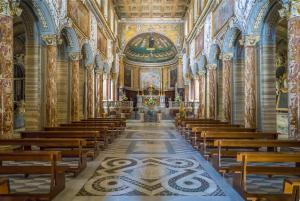 Basilica of San Marco near Venezia Palace and Campidoglio in Rome, Italy.

In view of the fact that the Venetian mission to the Holy See was based in the palace from 1564 to 1797 and that Mark is the patron saint of Venice, the building thus appears to have fulfilled its destiny. Inside, the apse mosaic from the time of Gregory IV (827-844), Christ Hands Over God’s Law, is noteworthy. 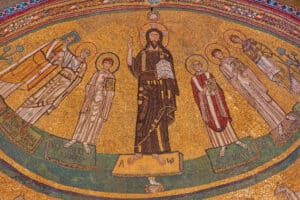 The apse mosaic of Christ among the saints in byzantine style in church Basilica di San Marco from the 9. cent. commissioned by Pope St Gregory IV by unknown artist.

Piazza Venezia set in the center of Rome, 2 km from (15 min walk) from Colosseum.