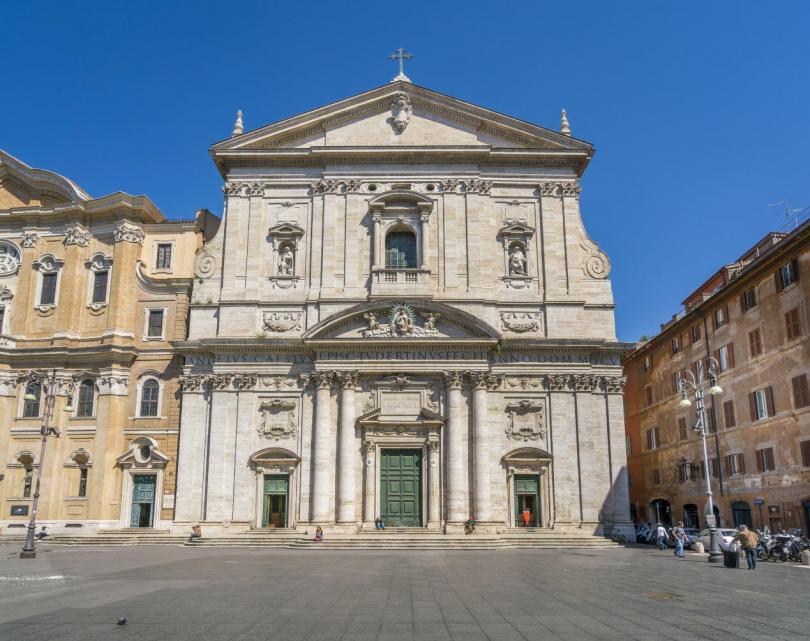 Santa Maria in Vallicella, which is one of the great Baroque churches of Rome, stands in the piazza on the Corso Vittorio Emanuele II.

Santa Maria in Vallicella, replaced an earlier, 12th-century chapel on the site dedicated to St. John. It is known also as Santa Maria in Vallicella—the church in the little valley. In 1575 Gregory XIII ( 1572-1585) granted the site, on which this church and adjoining monastery were later built, to the Congregation of the Oratory Fathers. It is not a parish church; the present church was built between 1580 and 1605, by Giovanni Matteo di Citta di Castello and Martino Longhi the Elder (1575-1605), on the site of a sixth-century chapel. 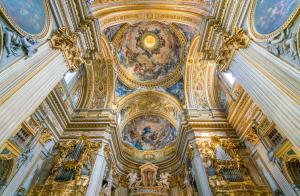 The dome of the Church of Santa Maria in Vallicella (or Chiesa Nuova), in Rome, Italy.

The façade is by Faustolo Rughesi and is baroque; the interior was designed by Borromini and the paintings along nave and transepts represent scenes from the Old and New Testaments from the creation to the resurrection of the dead; some of these are by Pietro da Cortona. The new church was consecrated in 1599 by Leo XI (1605) when he was Cardinal Alessandro di Medici. The church was restored in 1825. 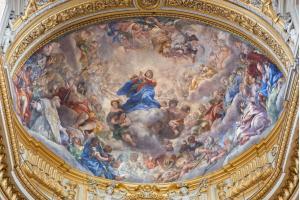 The of baroque fresco of Assumption of Virgin Mary in church Chiesa Nuova (Santa Maria in Vallicella) by Pietro da Cortona (1659 – 1660).

Under the high altar are the bodies of the martyrs SS Papias and Maurus, which were brought from St Adriano, in the Forum, in 1590 to the great joy of St Philip Neri. The pictures above and on the sides of the altar were painted by Rubens in his early days. To the left is the chapel of St Philip Neri, which contains a mosaic picture of the Saint lying in state after his death; this is a copy of the one by Guido Reni which is preserved in the adjoining convent. His body lies under the altar in a rich shrine of lapis lazuli and gold. 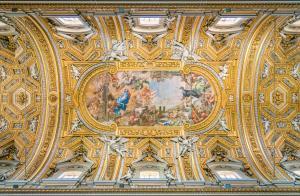 The painted vault by Pietro da Cortona, in the Church of Santa Maria in Vallicella (or Chiesa Nuova), in Rome, Italy

The sacristy has a wonderful ceiling representing St Michael by Pietro da Cortona, and a statue of St Philip Neri by Algardi. The sacristan will show this room if the door is locked. In the adjoining convent are the rooms where St Philip Neri lived and died and in them are many articles he used. This monastery was also built by Borromini and contains a famous library founded by St Philip.

Colosseum to Santa Maria in Vallicella: