Spanish Steps (Scalinata della Trinità dei Monti in Italian) were built in 1721-25 by Francesco de Sanctis (architect) to connect the piazza with the Church of the Trinita dei Monti and the Pincian Hill, was financed by the French ambassador, Etienne Gueffier.

The irregularly shaped piazza derived its name from the Spanish mission to the Holy See which has existed here since the 17th century. The famous monumental flight of 135 steps, which rises between picturesque houses, some with garden terraces, has alway been well loved by Romans and foreigners. Spanish Steps is a masterpiece of 18th century town planning.

A stroll across the ever-busy Spanish Steps is a must for every visitor to Rome. On the west side of the Piazza di Spagna, horse-drawn cabs patiently wait to take customers on a nostalgic tour of the Eternal City – an enjoyable experience in fine weather. 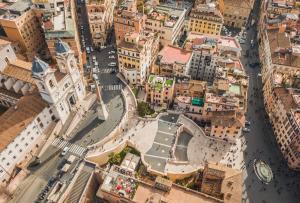 It is still allowed to sit on the 135 steps of travertine stone that make up the Spanish Steps, but eating there is subject to a fine. The ceremonial stair was built between 1723 and 1725 for Pope Innocent XIII by Francesco de Sanctis. He achieved a harmonious interplay of steps and landings, inviting terraces halfway up, and flights of steps that lead further, a timeless attraction for young and old. The steps were financed with money from the French ambassador Gueffier, which is why lilies from the coat of arms of the Bourbons can be seen here. 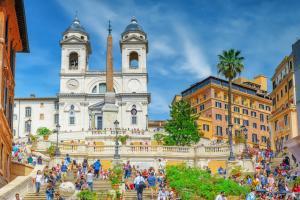 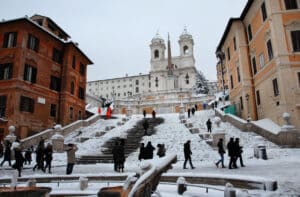 Spanish Steps covered by snow, a very rare event for a city like Rome

The spectacular conclusion of the annual day of fashion in July is called »Women Beneath the Stars«: in shimmering moonlight, star models display the newest creations of alta moda on the Spanish Steps. (Information: tel. 06 36 00 43 99). 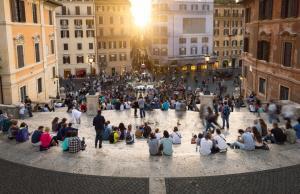 At the upper end of the steps is the French church SS. Trinità dei Monti, which was commissioned in 1502 by Louis XII and consecrated in 1585 by Sixtus V. It was restored after occupation in Napoleon’s time. The interior contains, among other works, a tomb by Daniele da Volterra. An Egyptian obelisk from the gardens of the author Sallust rises in front of it. 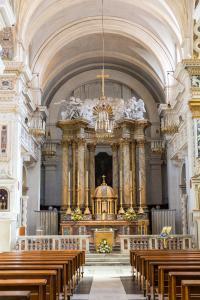 The interior of the Church Trinita dei Monti atop the Spanish steps in Rome. It is located on the very top of the Pinchio hill. Italy

The Palazzo di Propaganda Fide rises diagonally across from the Palazzo di Spagna, the seat of the Spanish mission to the Holy See. Pope Gregory XV proposed the construction of the palace, for which Pope Urban VIII of the Barberini family commissioned Bernini and Borromini. It is the seat of the Vatican »Congregation for the Propagation of the Faith«, the papal »ministry« founded at the end of the 16th century for the missionary activities of the church. 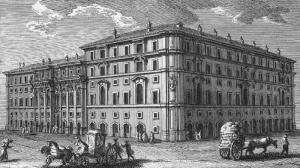 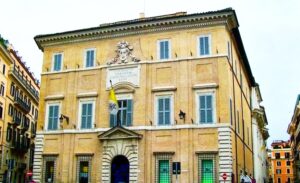 Column of the Immaculate Conception

An ancient Roman column with a statue of the Virgin Mary and the prophets Isaiah and Ezekiel as well as Moses and David at its base rises proudly in front of the two palaces. The pope visits this column annually on 8 December to commemorate the dogma of the Immaculate Conception of the Virgin declared in 1854. 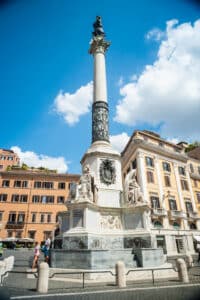 Piazza di Spagna with Column of the Immaculate Conception in Rome Column was set in 1857. Has more than 20m high with a bronze statue of the Virgin Mary on top.

Commissioned by Pope Urban VIII, the Barcaccia Fountain was built in 1629 by Pietro Bernini, with the help of his promising son Gian Lorenzo, to commemorate the disastrous flood of the Tiber River in 1598. It depicts a symmetrical, half-sunken boat. The stone bees are part of the coat of arms of the fountain’s patron, Urban VIII, of the Barberini family. Because of the low water pressure in the Acqua Vergine aqueduct that feeds it, Fontana della Barcaccia actually lies below street level. 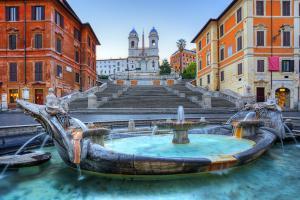 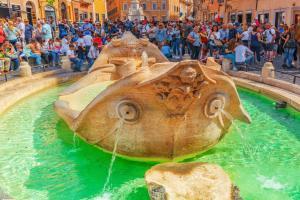 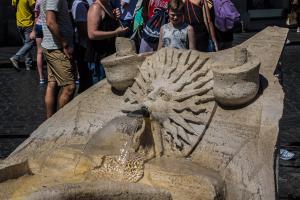 In house number 26 at the foot of the Spanish Steps, where John Keats died in 1821, there is a museum in memory of the English poets Keats, Shelley and Lord Byron (opening hours: Mon-Fri 9am-1pm, 3pm-6pm, Sat 22am-2pm, 3pm-6pm). Website: http://www.keats-shelley-house.org/. 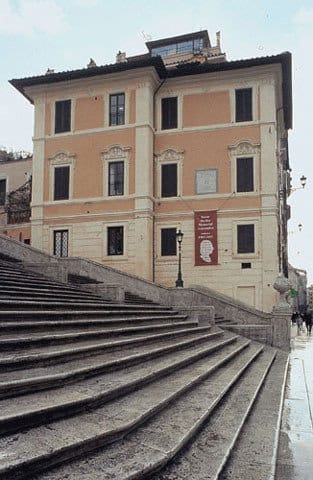 Just a few yards from the Piazza di Spagna lies the beautiful Villa Medici, the prestigious seat of the French Academy, which exhibits contemporary art in the garden between May and September. It is a late Renaissance building with a severe exterior façade and an elaborately designed garden façade at the rear facing the Pincio. 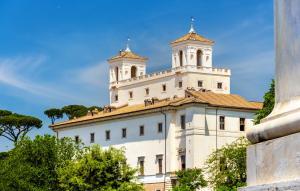 View of the Villa Medici in Rome – Italy

The villa was built by Annibale Lippi in 1544 for Cardinal Ricci of Montepulciano. After his death the building passed into the hands of Cardinal Federico de’ Medici, from whom it gets its name. After death of Federico de’ Medici, the villa gradually fell into neglect: Cosimo III de’ Medici (Grand Duke of Tuscany) moved the paintings to the Palazzo Pitti in the 17th century, and the archaeological collection was taken to Florence in 1770’s (it is now in the Uffizi Galleries). Finally Napoleon established the seat of the French Academy here, a foundation for French artists established in Paris in 1666 by Richelieu.

Between 1630 and 1633, Galileo Galilei was imprisoned in the Villa Medici by order of the Holy Office. 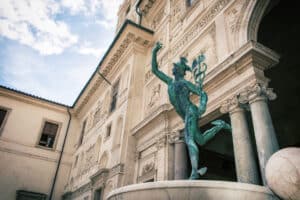 Bronze statue of Mercury in the courtyard of Villa Medici, Rome

»Fare lo shopping« say the Romans, and the best place to do so is in the classic shopping triangle between Piazza di Spagna, Via del Corso and Piazza del Popolo. Most of the legendary shopping streets such as Via del Babuino, Via Margutta, Via Borgognona, Via delle Carozze and Via Frattina are here.

With designer boutiques, jewellers, delicatessens, art galleries and antique stores, this is the place for a leisurely stroll or a proper shopping spree – with prices to match. Part of the tradition of the »Roma bene«, as the social elite of the Eternal City is called, is to shop in Via Condotti, or at least to know exactly what is available there. It is Rome’s most elegant shopping district, a beautiful place for a stroll where alta moda is at home, where wonderful shoes and handbags, extravagant design and sophisticated accessories are on display. The name Condotti comes from the water pipes (condotte) which Pope Paul III had installed beneath the streets in the mid- 16th century as part of the new city planning.

Since it was opened in 1760, what may well be the most famous café in Rome at Via Condotti 86 has always attracted artists and intellectuals. The regulars included Casanova, Baudelaire and Franz Liszt. This is where Goethe philosophized with his friend Tischbein, Gogol wrote his Dead Souls and Mendelssohn, Wagner and Nietzsche drank their coffee. Even today, the stylish interior is frequently used for readings and performances (tel. 06 679 7 00). Website: http://www.anticocaffegreco.eu/