Home » Italy Tours » Things to do in Assisi 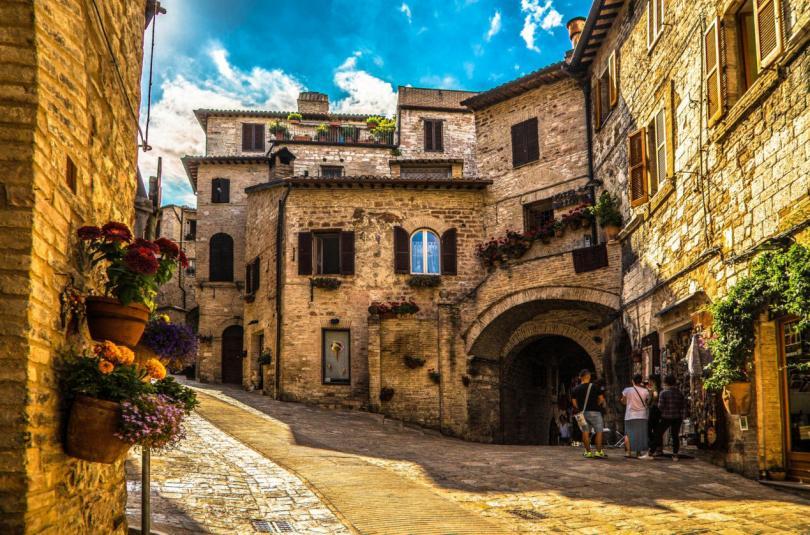 Assisi, the birthplace of St Francis (1182-1226), stands on the beautiful terraced slopes of Monte Subasio, above the Valle Umbra. A powerful city in the Middle Ages, Assisi fell into obscurity in the early 16th century, but it again became a popular destination for visitors and pilgrims after the discovery of the bodies of St. Francis in 1818 and St. Clare in 1850 generated a renewed interest in Assisi’s medieval art. 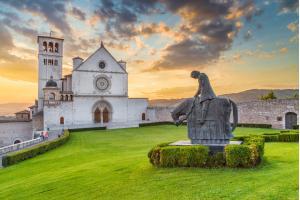 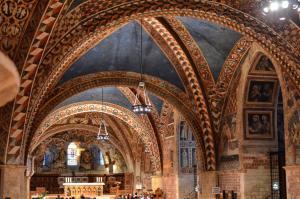 Things to do in Assisi: What to See?

Basilica di San Francesco: The construction of the Basilica di San Francesco began in 1228. Combining Umbrian Romanesque with French-inspired Gothic architecture, the complex consists of two churches, one above the other. The cool and dimly lit lower church (1228-30), was decorated with frescoes by some of the greatest painters of the 13th and 14th centuries, including Cimabue and Giotto.

The four frescoes over the main altar depict St Francis in glory and the virtues of the Franciscan order- poverty, chastity and obedience. Don’t miss Cimabue’s simple portrait of St Francis in the right transept. St Francis is buried in the crypt By contrast, the painstakingly restored upper church (1230-53) has high vaulted arches and is bright and airy. A series of 28 frescoes by Giotto illustrates the life of St Francis.

Basilica di Santa Chiara: St Francis’ contemporary St Clare (1193-1253), founder of the Order of the Poor Clares, dedicated her life to the Franciscan movement Her Romanesque basilica, with its pink and white striped stonework and huge flying buttresses, was built between 1257 and 1265.

Some Giotto-school frescoes survive, but the highlight is the iconic painting of St Clare and Eight Scenes from Her Life behind the altar, painted in 1283 by an unknown Umbrian artist St Clare’s remains are in the crypt.

Piazza del Comune: At the heart of Assisi is the Piazza del Comune, the site of the Roman Forum. Here the imposing Torre del Popolo stands next to the Temple of Minerva, intact with its elegant Connthian columns. Erected in the first century BC, it has been a church since 1539. Overlooking the town is Rocca Maggiore, a fearsome 14th-century fortress (daily 9-8).

Assisi tends to be one of Italy’s most popular places to pilgrimage since it’s the home of St. Francis, so it can be very busy. However, many tourists tend to just be day-trippers. For a more enjoyable time, try spending the night in Assisi and get out in the evening to explore since the streets are much quieter then. 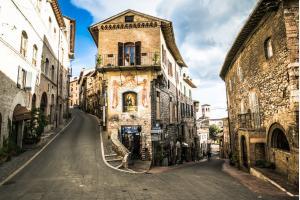 Visiting medieval Assisi is a sporty activity, you can walk through the streets till you reach the top of Assisi, where you have a stunning panorama.

Things to do in Assisi: Where to Stay?


Things to do in Assisi: Enjoy Assisi Tours