Home » History » Abandonment and reuse of the Colosseum 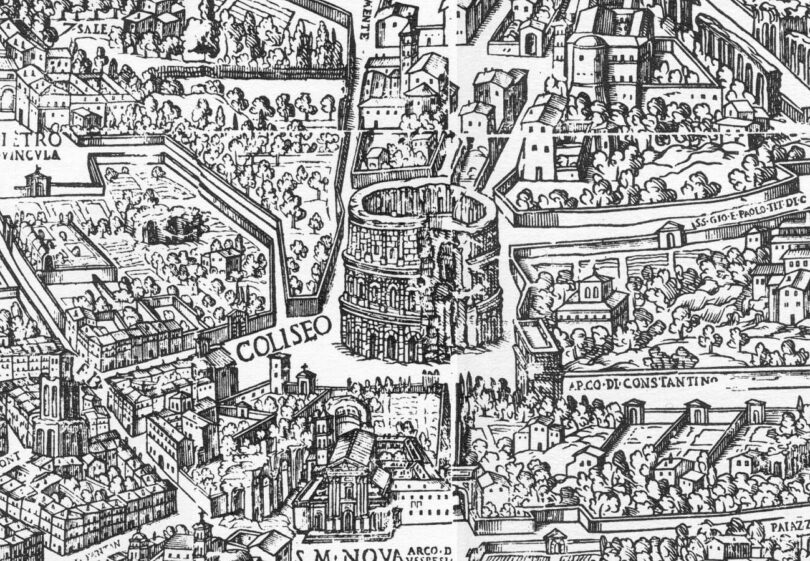 Colosseum was struck in the early 5th century by earthquakes that weakened its structure and caused, with the ruins that accumulated in the hypogeum, the start of the gradual interment of its underground spaces. As its structures decayed and there was increasing difficulty in keeping it in good repair, the city’s ruling class and emperors, most of whom were now Christians, felt growing indifference or even aversion for the bloody gladiatorial shows.

Despite the efforts of Constantine and his successors to abolish gladiatorial combats they were finally banned only in 404 by Honorius. The last known games were held under the reign of the Ostrogoth king Theodoric (A.D. 473-526). 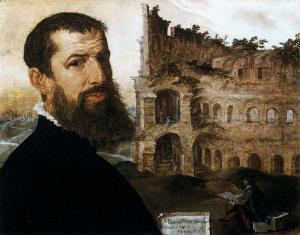 The Amphitheater’s loss of its original function led over the centuries to the transformation and decay of its structures. For example, the innumerable gaps in the outer travertine façade are simply the holes made to remove the metal brackets that held the blocks together.

The whole building suffered, particularly the interior and south side, to the point where the outer circle on the south side was eventually demolished, as can be seen today. The north side, however, was saved because it is stood on a major urban axis, the thoroughfare that ran from the Palatine, the seat of political power, and the city centre to the Lateran, the seat of the papacy. 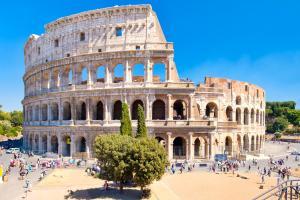 The Colosseum, a symbol of antiquity and of the city of Rome

At the start of the 12th century, the noble family of the Frangipane, which at that time controlled the whole area from the Forum Boarium to the Palatine, built themselves a fortified residence in the eastern area of the Colosseum. All trace of this, as of the other post-ancient and mediaeval structures, was obliterated by the 19th-century excavations.

The plunder gradually turned several monumental buildings under construction at that time, especially St. Peter’s. The Church subsequently turned the arena into a holy place: from the early sixteenth century it housed a chapel and from 1720, along its perimeter, the Stations of the corridors. Meanwhile, systematic plunder had already begun of the blocks of travertine, the marblesections of the monument into real quarries and even led to the demolition of the south exterior ring. The Colosseum also served as a general container: in it people built themselves animal pens, small houses and craft workshops. 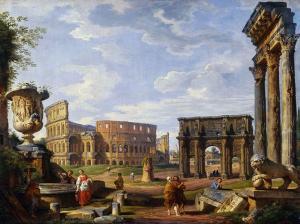 A stricter conservation policy was urged in vain by Roman humanists in the fifteenth century. Indeed, excavation activity actually increased to provide materials for the Cross. In the seventeenth and eighteenth centuries the demolitions slacked off and the first, half-hearted conservation measures were adopted. During the nineteenth century the first systematic excavations were undertaken by Carlo Fea (between 1812 and 1815) and Pietro Rossi (in 1874-1875). The excavations brought to light again the subterranean structures of the arena, thus making it necessary to remove the shrines and the chapel, which was originally located in the east section of the cavea. During the same period the first significant reinforcement and restoration work was carried out. 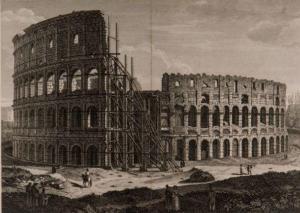 Between 1805 and 1807 Raffaele Stern built the brick abutment in the east section, while in 1827 Giuseppe Valadier restored the wall of the same exterior ring on the opposite side. Finally, the work carried out by G. Salvi and L. Canina between 1831 and 1852 regarded the interior structure in the south and north sections. Further restoration, especially in the cavea and the cellars, took place in the 1930s.