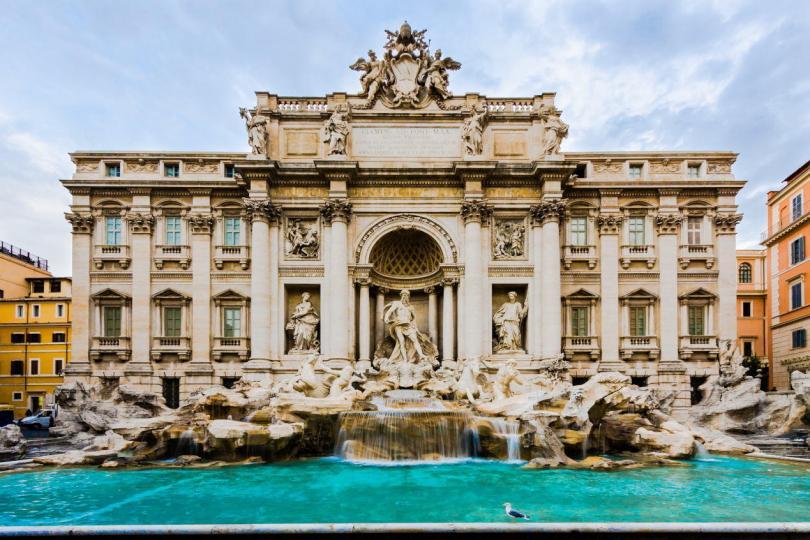 Trevi Fountain, the largest fountain in Rome, rises in the middle of a square surrounded by surrounding houses. This theatrical waterscape emerging unexpectedly in the bustling city centre is one of the most popular ports of call for the hordes of summer visitors.

Trevi Fountain is the monumental ending of the “Acqua Vergine” acqueduct. The 9th of june of the year 19 A.D., the year emperor Augustus’ son in law, Agrippa, inaugurated a new aqueduct. The aqueduct which started at the “ager Luculllanus”, between Rome and Tivoli, the Via Tiburtina and the ancient Via Collatina, brought to the city a new source of water.

According to an old tradition, the name “Vergine” derives from a young vergin who pointed out the spring to a group of thirsty soldiers who belonged to Agrippa’s army. 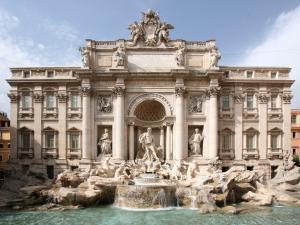 The construction of the fountain began in 1732 under the direction of Nicolo Salvi whose project it was, and was completed in 1762 by Pannini.

Probably the name Trevi derived from a small locality near Rome abunding in spring water, whose name one can trace back to one of the various forms and commonly used ancient Italian terms, “Trebium”. which later became vulgarised into “Trevi”. The name “Trevi” for the fountain could also derive from the fact that it is situated at the crossing of three roads (“Trevi-trene”), nowadays the Via Poli. Via dei Crociferi and Via delle Muratte. From an inscription found in situ at the beginning of the sixteenth century one can assume that near the piazza there had been an old spring, part of die “Vergine” waters, decorated by a sleeping “naiad”.

This information is backed by numerous perspectival plans which show, beneath the “Dioscuri” of the Quirinale, therefore in correspondence with the piazza, a reclining statue. During the Renaissance the place was always associated with the virgin of the old legend.We know that in antiquity the ‘‘Vergine” acqueduct ran on several arches, some of which still existed at the beginning of the sixteenth century, just behind the actual statue, ending with a small water tower not far from the “Termite” of Agrippa, between the Pantheon and the church of S. Ignazio. 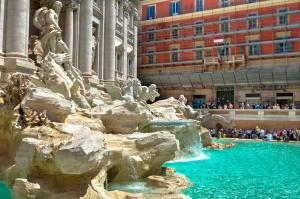 The first façade for the fountain, the only one drawn in the oldest representations of the city, shows it as being in a different position from its present one, and on the eastern side of the piazza where there were three basins which gathered water which spouted from three mouths. From the period of Nicolo the Fifth (1453) onwards this facade was slightly modified due to tile restoration of the aqueduct by the architects assigned to it: Leon Battista Alberti and Bernardo Rossellino, the authors of the embellishments to the ancient waterworks in Renaissance taste.

A rectangular basin received water from two openings, also rectangular, placed on the sides of a central vase with three mouths in the shape of wild beasts. A dedicatory inscription, with the coat of arms of the Pope, with two shields, symbols of the Roman people, was placed on the upper part of the fountain. 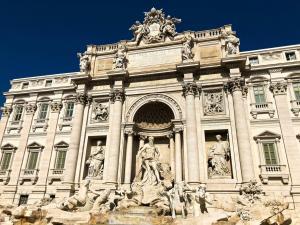 The size of the grandiose fountain, the most monumental in Rome, which imposed iteself the more so by dominating the narrow piazza, was also to determine the lenghth of time for its completion and the modifications during its construction. After a first inauguration in 1735, only when Benedict XIVth had increased the water flow was the facade again inaugurated in 1744, and definitively completed in 1762, with all its marble statues.

The four sculptures that surround the dedicatory panel of the top part and the rock face were the first to be made by Antonio Corsini (the abundance of fruit), Bernardo Ludovisi, (the fertility of the fields), Francesco Queirolo (the richness of Autumn), Bartolomeo Pincellotti. to whom we also owe the ornamentation of the rock face (the amenity of the meadows). 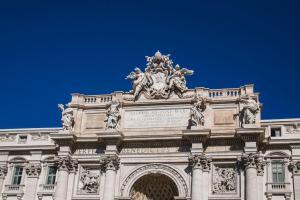 Dedication at Top of Trevi Fountain 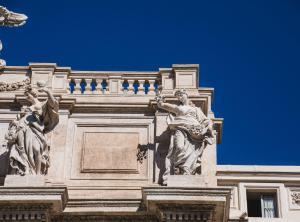 Pope Corsini’s coat of arms was by Francesco Pincellotti and Giuseppe Padoli; the two fames on either side of the coat of arms which crowns the facade are the work of Paolo Benaglia (1736): the two reliefs at first made in terracotta and then, in 1760, in marble, are by Gian Battista Grossi and Antonio Bergondi; they represent, respectively, on the right of the central niche, the Roman virgin who shows the soldiers the spring and, on the left, Agrippa, who looks upon the construction of the aqueduct. 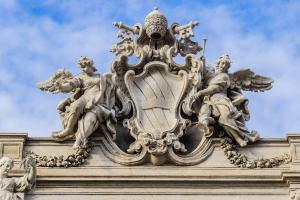 The two sculptures in the niches below. originally made in wood and representing the Virgin and Agrippa were substituted, under the direction of Pannini, who succeeded Salvi in 1751. by the “salubrity of the air” and “Abundance”, both by Filippo Della Valle (1759-1762). 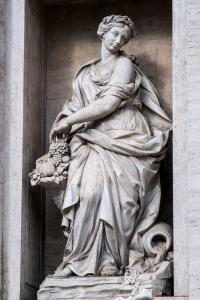 The sculptures of the Ocean and the two tritons, with the winged horses in the central part, made in stucco in 1741 by G.B. Maini, were later made in marble by Pietro Bracci (1759-1762).

The Trevi Fountain constitutes an exceptional “unicum” with the city to which it is intimately linked. It represents the ideas of an age, the synthesis of artistic and philosophical beliefs stratified over the centuries.

The scenic effect of the fountain, which emerges from the rock face as if from a stage, forming an invitation to the spectator to enter the scene with a strong feeling of surprise and wonder, underlined by the noisy gushing of water, lakes over the piazza by giving it a sense of proportion and incredible decorative perspective. The triumphal arch which forms the central part, following a form typical of preceding fountain facades, is decorated at its higest point by a balustrade with the Corsini coat of arms and by allegorical statues symbolising the beneficial effects of water. 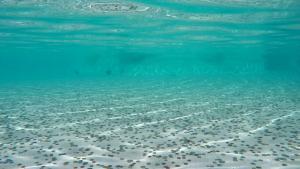 Underwater photo of the Trevi Fountain: Coins. Most people know the tradition of throwing a coin into the fountain if they want to return to Rome. It continues a tradition of the ancient Romans who threw coins into certain fountains to appease the gods. All the coins in the Trevi Fountain are collected by an undenvater vacuum cleaner once a month and separated into Euro and foreign currency. The former are used to maintain the fountain, and the latter is donated to the International Red Cross.

Corinthian columns divide the space into lateral frames with the sculptures and the low reliefs describing the legend of the “Vergine” water. In the middle, in a niche with ionic columns, there is the colossal statue of Ocean with is higher than all other statues in Rome. 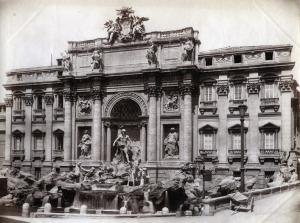 The sculpture gestures powerfully towards the water in the basin, supported by a shell shaped chariot drawn by winged sea horses led by two tritons having specific mythological meaning, both the central and the lateral parts have the same pediment “parte bugnato e parte rustico” made out of rockeries.

One of the important archaeological discoveries made while workers restoring a theatre, which is close to Trevi Fountain. The underground city discovery of La Citta’ dell’Acqua, which means the city of water, is recorded as Vicus Caprarius in the literature.

You can participate in this tour if you are willing to witness this city of water. You are going to take a closer look at the past in this tour and see the old houses that people used to live. One of these luxurious houses converted into massive water cistern centuries later during the Imperial Age. Researchers discovered that this cistern is capable of storing 150,000 liters of water. The water distribution tank used to supply water to Rome in old time. This underground water city located under 9 meters deep with 350 square meters surface area.

This underground water city will amaze you as well as taking you to a short trip in the history of Rome where you can witness some of the important events that took place in the history such as assault of the Goths and Nero fire.

According to the legend not only he who throws a small coin in the Fountain of Trevi but also he who drinks of its water can be certain to come back to Rome, This customs must relate to an ancient Roman tradition, in any case it is confirmed in the literature of the 19th century.

The empress Carlotta Amalia Maria, the unlucky wife of Maximilian of Austria, wanted to drink the water of the Trevi Fountain using a precious goblet given to her by Pope Pius IXth. Gigi Zanazzo in his book “Usi e costumi e pregiudizi del popolo di Roma” (Usages and customs and prejudices of the people of Rome) lists numerous proverbs and manners of speech relating to the water of the fountain. “He who has drunk the water of Trevi will not forget it” or “he who comes to Rome and tastes the water of Trevi will stop there: it heals twelve illnesses”. 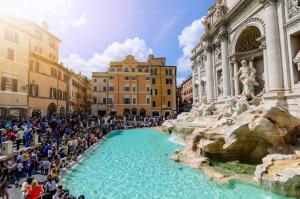 Tourists visiting the Trevi Fountain; a well-known symbol of Rome

There is another legend that relates to the “Vergine” water, the one that tells of the young girl that revealed the presence of the spring to the thirsty soldiers of Agrippa: the more or less impure water of the torrent Hercoleanus which detached itself from the main duct of the Acqua Marcia, south of the Tiburtina gate, blend with the limpid one of the Salone spring, hence the latter would loose its original purity precisely as happens to a virgin who has been contaminated.

The ancient Romans however thought they could restore the original purity of the waters by separating the “Vergine” water from the polluted stream. With Benedict XVth however the implications of purity and virginity were lost because the new waterworks meant that the “Vergine” water joined up forever with that of the Hercoleanus stream.

There is also the story of the barber whose shop opened up on the Piazza di Trevi at the time of the construction of the fountain. He thought he could advise architect Salvi making proposals for modifications in the construction. Salvi was not a talkative type and he might have been bad tempered. Thus Salvi punished the boring barber preventing him from looking at the fountain from his shop.

The architect would have ordered a large vase to be built above the balustrade towards the Via della Stamperia and which later was nickamed “asso di coppe” (the ace of one of the suits of the Italian pack of playing cards). According to others the vase represents a container pertaining to the craft of the barber which could be filled with shaving soap. This is a legend or perhaps the architect had planned a rustic balustrade interrupted in some places by spurs of rocks one of which was carved jokingly in the shape of a vase? The legend could however be a hint at Salvi’s playful punishment of the barber. 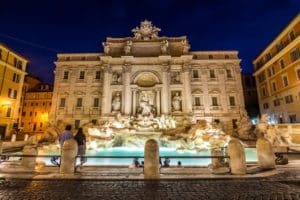 There is also a legend relating to the small fountain of the two lovers. When a young man had to leave Rome he would be taken by his fiancee to the Fountain of Trevi to drink a little water with a new glass which, after the rite, would be broken: that meant a good omen of eternal love. The water soon began last doesn’t of Trevi would reassure the lovers through the good wish of “Come back!”.

American cinema also used the Trevi fountain. Who doesn’t remember Anita Ekberg who. in I960, in the film “La Dolce Vita” by Federico Fellini, spread the fashion of dipping one’s feet in the waters of the fountain amongst the girls that came to visit Rome. 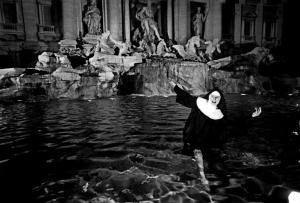 In 1972 an unknown German actress undressed herself and dived into the “Vergine” water to attract publicity. Her provocation was not appreciated by the police: she was arrested and accused of committing obscene acts in public.

Trevi Fountain set in the center of Rome, 1,6 km from (19 min walk) from Colosseum.