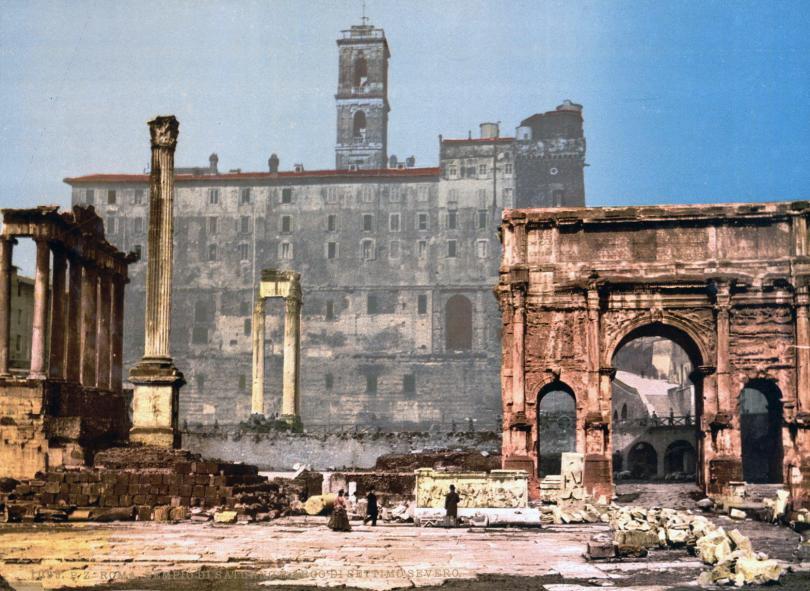 Arch of Septimius Severus has survived its 1.800 years remarkably well. In 203 A.D the Roman Senate erected a great arch to commemorate the victories of Septimius Severus against the Parthians. The inscription in the attic dedicated by SPQR (the Senate and People of Rome) to ‘pater patriae’ and ‘pontifex maximus’ refers to his military victories in Parthia (Asia, modern-day Iran).

This triple-vaulted monument was erected just where the Via Sacra begins to climb toward the Capitol, the culminating point of triumphal processions awarded to victorious generals. The arch is wholly sheathed in marble and an image on a coin shows it was originally surmounted by bronze sculptures: a chariot drawn by six horses flanked with equestrian statues symbolising the triumph decreed to the emperor. 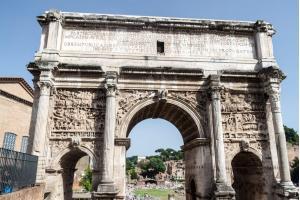 Arch of Septimius Severus at the Roman Forum, Rome, Italy

The arch is about 20 met. high, 25 met.wide and over 11 meters deep and has three passageways, a large one in the center and two smaller ones at the sides with short flights of steps leading up to them.

In the carvings on the arch the same theme is expressed in the small frieze above the two lesser vaults. This shows carts filled with booty, soldiers, prisoners, and the great statue of a seated figure that personifies the conquered province. 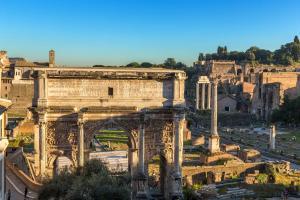 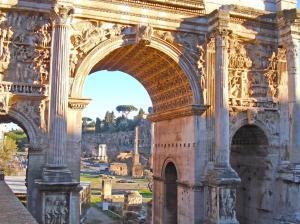 The Triumphal Arch of Septimus Severus located in Roman Forum in Rome, Italy 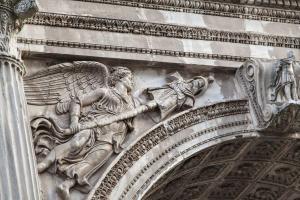 Detail of the arch of Septimius Severus, located in the roman Forum. Rome, Italy.

To the Imperator Caesar Lucius Septimius, son of Marcus, Severus Pius Pertinax Augustus(Septimius Severus), father of his country, conqueror of the Parthians in Arabia and Assyria, Pontifex Maximus, with Tribunician powers 11 times, triumphing general 11 times, consul 3 times, and proconsul; and to the Imperator Caesar Marcus Aurelius, son of Lucius, Antoninus Augustus Pius Felix (Caracalla) with tribunician powers 6 times, consul, proconsul, father of the fatherland, the best and braves of princes, on account of the republic restored and the empire of the Roman people increased by their outstanding virtues at home and abroad, the Senate and the Roman people dedicate this arch.

On the attic is the dedication to Septimius Severus and his son Caracalla. Originally the inscription of the Arch of Septimius Severus mentioned Geta, the second son of emperor Septimius Severus, but his brother Caracalla murdered him after their father’s death and had his name removed from all state monuments, a procedure called “condemnation of his memory” (the damnatio memoriae).

In the Middle Ages, the arch became part of a castle, which has most likely contributed to it still being so unspoiled. The Arch of Septimius Severus from 203 AD, is the last triumphal arch that was constructed on the Roman Forum.

The inscription at the top of the arch was very first committed to Septimius and his sons Caracalla and Geta, however after Caracalla killed Geta following his father’s death, Geta’s name was removed. This can still be seen today by the pin holes of the copper letters that hint to the name Getanog.

Featured Image of this post: The Column of Phocas and the Arch of Septimius Severus in the Roman Forum, Rome, Italy; color photochrom ca 1890’s.

Arch of Septimius Severus set in the center of Roman Forum, 1,0 km from (11 min walk) from Colosseum.