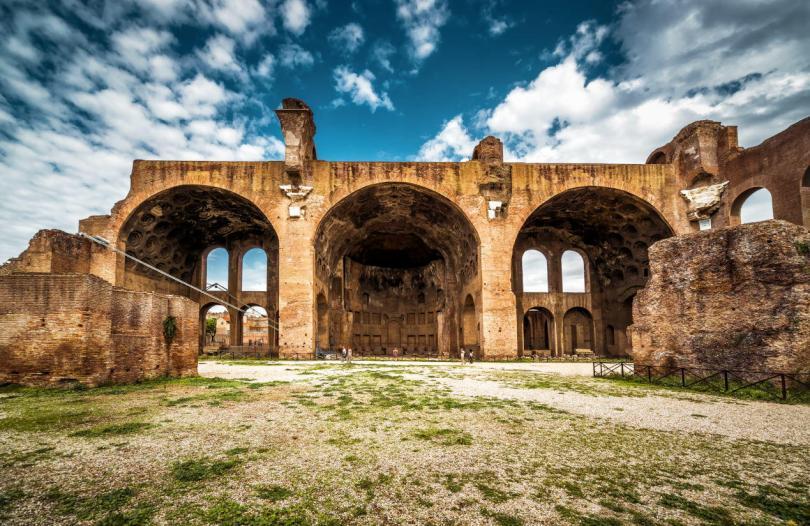 Access to the Basilica of Maxentius (also known as the The Basilica Nova), which stands outside the existing historical zone of the Roman Forum, is from the Via dei Fori Imperiali. The building was begun by Maxentius in the early years of the 4th century A.D. on a site previously occupied by the Horrea Piperataria (spice warehouses) dating from the Flavian period. When Constantine the Great defeated Maxentius at the Milvian Bridge he completed the building, partly altering the original design. 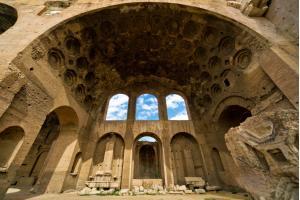 The Basilica of Maxentius and Constantine in the Roman Forum in Rome, Italy. Visitors to the Roman Forum in antiquity could see it shining from afar, for its roof was once covered with gilded tiles. However, they were removed in the 7th century and re-used in the building of Old St. Peter’s. 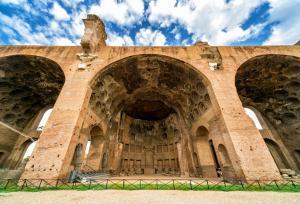 Basilica of Maxentius and Constantine at the Roman Forum, Rome, Italy. Bottom view. Roman Forum is one of the main tourist attractions of Rome. Ruins of a giant ancient temple.

The structure bases on a platform which remains in part a base and which is superimposed on stockrooms of substantial size, inhabiting a location of 100 by 65 meters. The initial entryway, which Constantine likewise kept, opened into a narrow extended atrium from which 3 openings led into the big main location, oriented east- west, 80 meters long, 25 meters large and 35 meters high, covered by 3 cross vaults supported by 8 columns in proconnesian marble, 14.50 meters high, set against piers (none which are still in situ). At the back, right throughout from Maxentius’ entryway, there was a semicircular apse which included a massive acrolithic statue of Constantine (with the exposed parts of the body in marble and the rest most likely in gilded bronze), the head which, 2.60 meters high, and a foot, 2 meters long, were discovered in 1487. Today they are preserved in the courtyard of the Palazzo dei Conservatori on the Capitoline Museums. 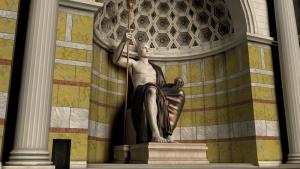 Statue of Constantine the Great – Reconstruction by the University of Virginia. Source: twitter.com/thebyzantinelegacy 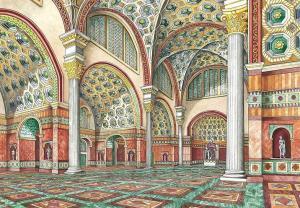 The aisles on either side of the nave were divided into 3 interacting bays with transversal coffered and stuccoed barrel vaults. Constantine’s brand-new project moved the axis of the basilica from east-west to north-south, preserving the tripartite division, with an entryway on the south side with 4 high porphyry columns and a flight of steps which led from the Via Sacra to the flooring of the structure which was partially enclosed in the Velian hill. Throughout from this entryway a brand-new semi-circular apse w’as set into the wall at the center of the north aisle, preceded by 2 columns and with specific niches for statues framed by little columns on corbels.

The nave was lit up by a series of big windows in the clerestory while the side aisles had 2 tiers of arched windows.
The ground plan and measurements of the structure w’ere influenced by the enforcing halls of the royal baths, which were likewise called ” basilicas “.

Basilica of Maxentius set in the center of Roman Forum, 0,4 km from (5 min walk) from Colosseum.