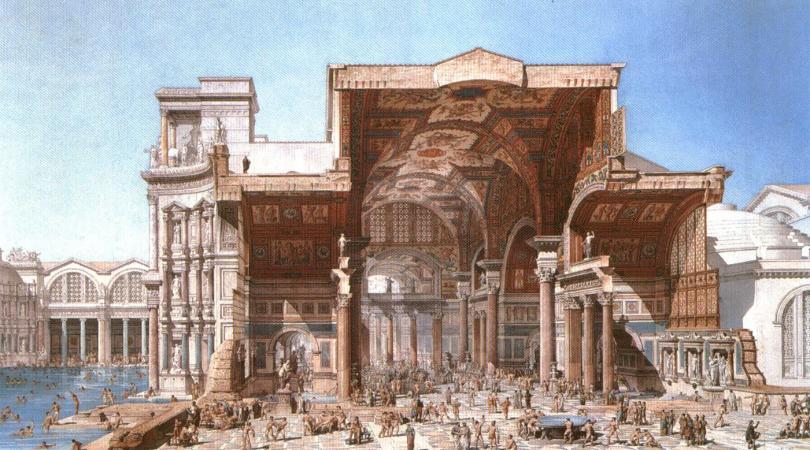 The Baths of Diocletian, the biggest ever built in Rome, were erected in one of the most densely populated parts of the city, the area comprising the Esquiline, Quirinal and Viminal. The largest of all the ancient Roman baths, Baths of Diocletian could accommodate over 3000 people at once.

Emperor Diocletian’s aim was to provide the northern parts of the city with baths that would meet the varied needs of the Romans, as his predecessor Caracalla did in the south of Rome. Many buildings were demolished to make way for this immense complex, built rapidly between 298 and 306 AD and covering 140,000 square metres. With its dimensions of approximately 380 x 370m., the Baths of Diocletian erected in 298-305 surpassed those of Caracalla. 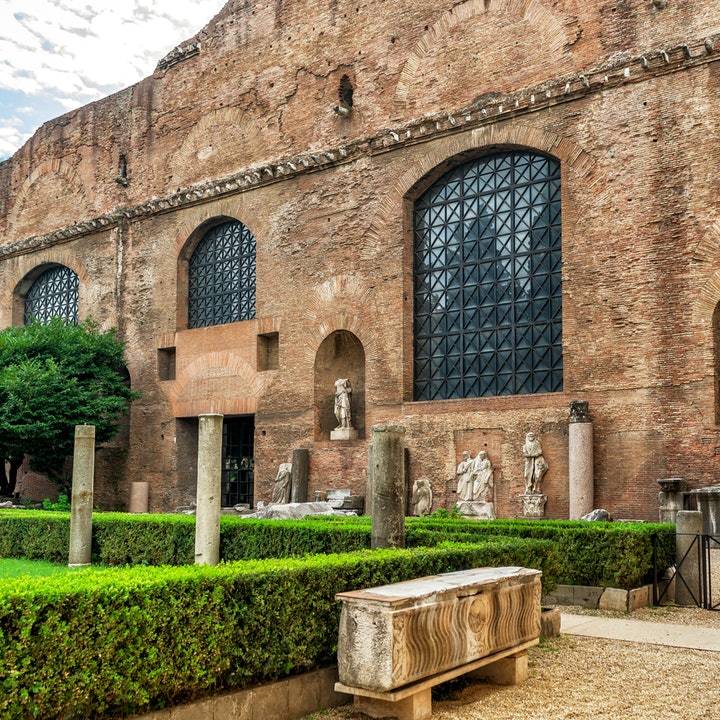 The baths of Diocletian in the model of Rome, Museo della Civilta Romana, Rome. 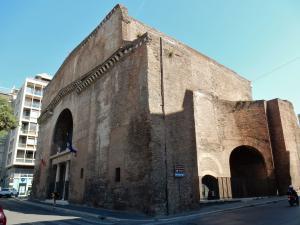 Octagonal Hall of Diocletian Baths, or more commonly Planetarium, seen from Via Romita 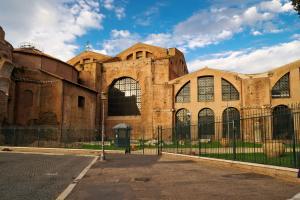 The Baths (Thermae Diocletiani) in Rome

The main buildings included the Calidarium, the Tepidarium, and the Frigidarium. The Calidarium, which survived into the late 17nd. century, occupied part of the present piazza. The Tepidarium and the huge central hall of the baths are now occupied by the church of Santa Maria degli Angeli. The areas of the basilica which were originally part of the baths have been incorporated into the Museum of the Baths (Museo delle Terme). Its garden still contains the facade of the main building.

The Frigidarium was an open-air bath behind this hall. Numerous large and small halls, nymphaea, and exedrae were located within the precincts. In the 16nd. century a Carthusian convent was built in the ruins. Much damage was done to the baths in the 16nd-19nd.centuries by architects and builders who used the materials for other purposes. 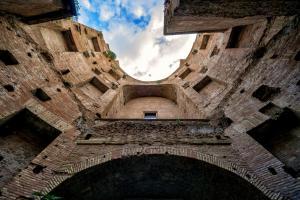 Ruins of the Baths of Diocletian, Rome, Italy. 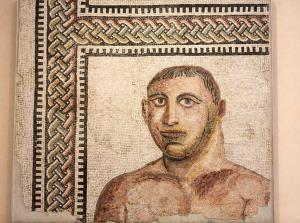 “I live on top of the public baths, Imagine a hubbub that makes you sorry you’re not deaf. Whenever athletes practise lifting lead weights… I hear them wheezing and grunting. I even hear the masseur’s hand slapping their shoulders…. Then if the ball players arrive and start calling points aloud it’s the last straw. Add… people plunging into the swimming pool with an almighty splash and you’ll have some idea of what goes on. But apart from these people, who at least have normal voices, imagine the depilator who tries to attract attention by screeching and never keeps quiet except when he’s stripping the hairs from someone’s armpits and making them yell instead of him. And then there’s the drinks seller with his cry, and tin sausage seller with his, and the other hucksters, and they all cry their wares in their own special tone of voice.” Seneca, Letters to Lucilius.

A visit to the surviving parts of the complex, some of which have been converted for other purposes and lie far apart, reveals its enormous extent: the Museum of the Baths (Museo delle Terme), the vaults converted into the church of Santa Maria degli Angeli by Michelangelo, the circular church of San Bernardo, the planetarium named Aula Ottagona, Piazza Esedra, and the buildings of a Carthusian convent.

When the Aqueduct Acqua Marcia was breached in 536 A.D., the Baths of Diocletian could no longer be used and fell into disrepair. After the opening in 1889 of the Museo Nazionale Romano, numerous encroaching buildings were removed. Along the modern Via Parigi stand conspicuous remains of buildings demolished to make way for the Baths.

Colosseum to Baths of Diocletian:

Baths of Diocletian set in the Piazza dei Cinquecento, 1,9 km from (26 min walk) from Colosseum.