The name Amphitheatrum-Colyseus appeared for the first time in the eleventh century as a designation for the building, which had previously been called “Amphitheatrum Caesareum”, and was later extended in the name regio Colisei to the entire valley. It derives from the colossal bronze statue of Nero, which stood in the immediate vicinity. Commissioned from the sculptor Zenodoros and inspired by the famous Colossus of Rhodes created by Chares of Undos at the beginning of the third century B.C., it portrayed the emperor standing and decorated the vestibule of the Domus Aurea on the site now occupied by the Temple of Venus and Rome.

«… a colossal statue of Nero, 120 feet tall, stood in the vestibule of the house. The size of the latter was such that it had three colonnades a mile long and a pool that ivas more like a sea, surrounded by buildings as large as cities. On the other side were villas with fields, vineyards and pastures, and woodlands full of all kinds of domestic and wild animal»
(Suetonius, Nero, 31, 1).

Its gigantic size – it was about 35 meters tall, as can be calculated from the proportions of the base and a passage from Piiny the Elder – made it the largest bronze statue ever made in the ancient world. Thus Hadrian, in order to build the Temple of Venus and Rome, had to use a cart pulled by twenty-four elephants to move the statue from its original location. 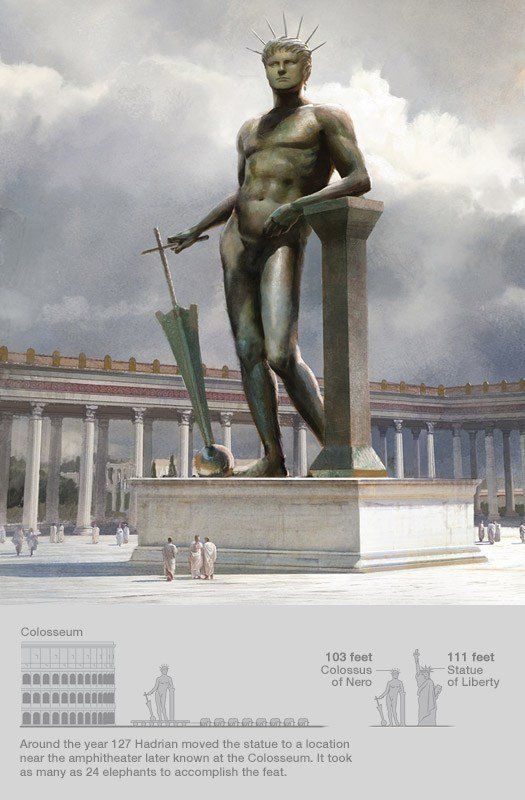 Reconstruction of the Colossus of Nero – National Geographic

The Meta Sudans, the Arch of Titus, the Temple of Venus and Rome, and the Cobssus as reconstructed by E. Coquart (1863)

The pedestal of the Colossus of Nero. Rome, 1920. Via Roma Ieri Oggi.

Vespasian had it transformed into a radiate image of the Sun, while Commodus preferred to characterize it with the attributes of Hercules and his physiognomy. When the latter emperor died, the Colossus again became the image of Helios and remained such during the reign of Septimius Severus, as demonstrated by the coins of the period portraying the god with his left hand resting on a helm and his right one holding a globe. At first a symbol of immortality and later of the Eternal City, it continued to be an object of worship even in the Christian era.

The Colossus was probably destroyed during the Sack of Rome (410 A.D.), or perhaps it fell as a result of one of the earthquakes of the fifth century. His bronze was almost certainly reused by Pope Gregory the Great (540- 604 A.D.) who had it melted down to produce the cannons of Castel Sant’Angelo.  The base of the statue, of which only a few vestiges still exist today, was demolished in 1933, when Via dell’lmpero and Via dei Trionfi were built. Zoomed area of the aerial photo of the base of the Colossus of Nero. Photo: https://www.roger-pearse.com 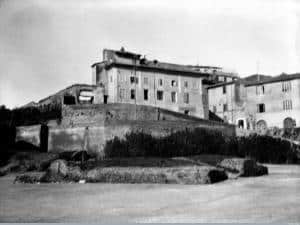 Base of the Colossus of Nero, Coliseum, Rome, Italy. 1929 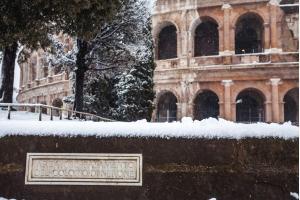 Base of the Colossus of Nero – Colosseum under snow. 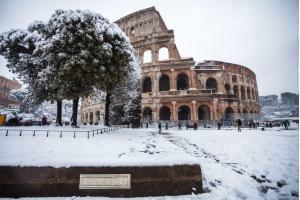 Base of the Colossus of Nero – Colosseum under snow.

Reconstruction Sketchs of Colossus of Nero: 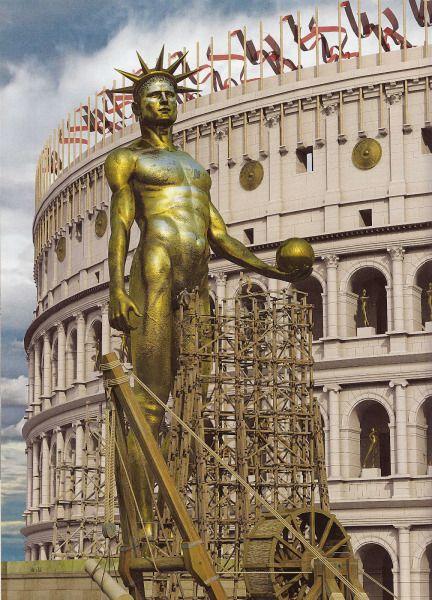 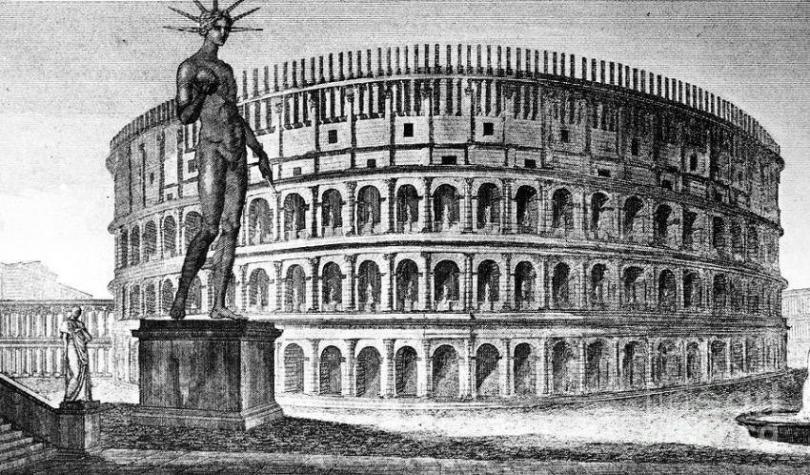 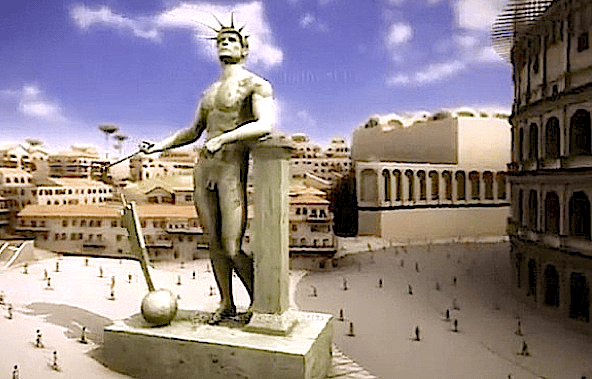 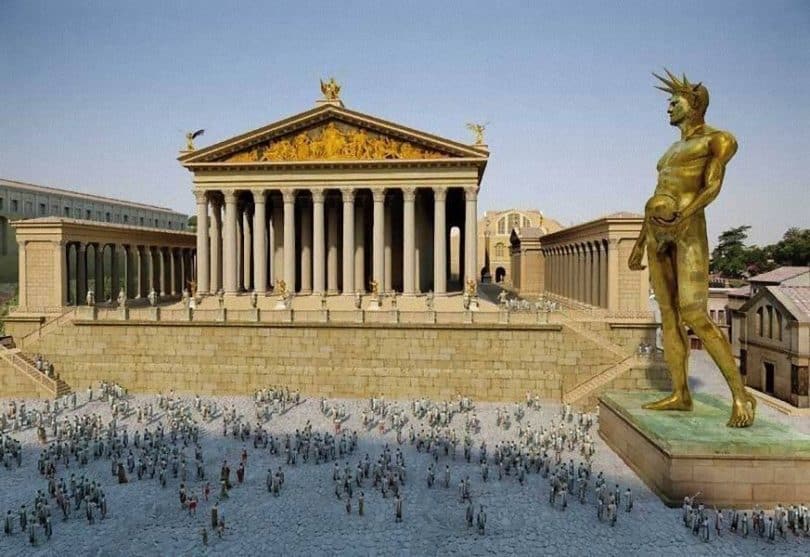 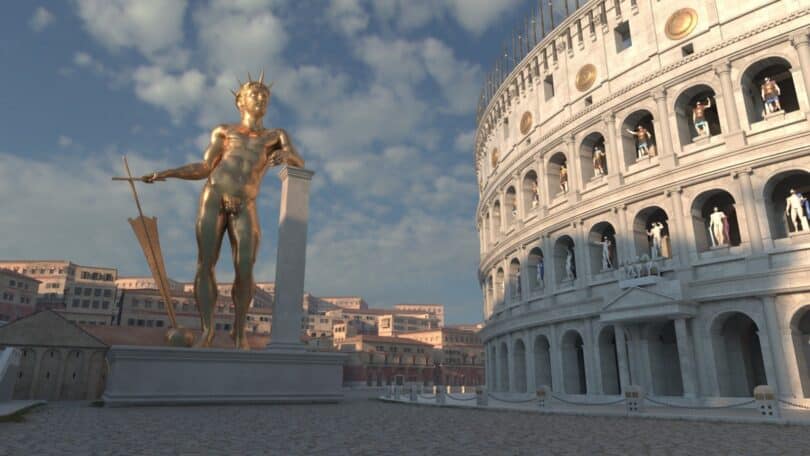 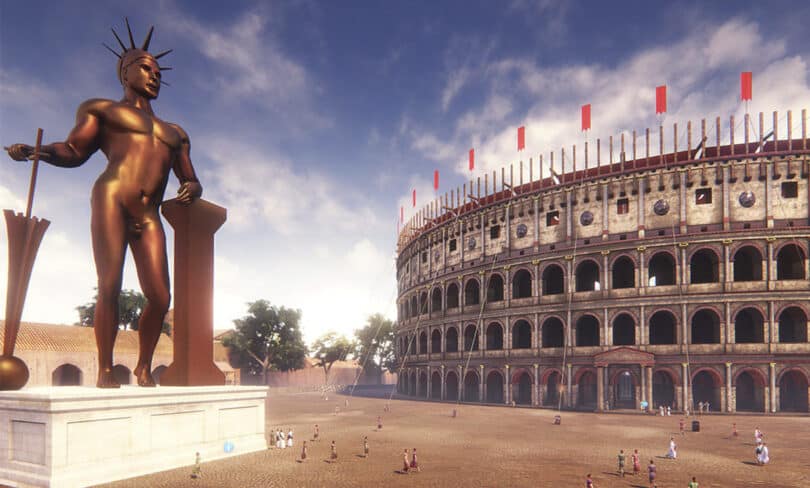 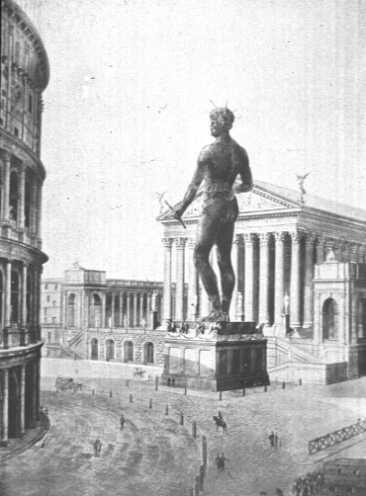 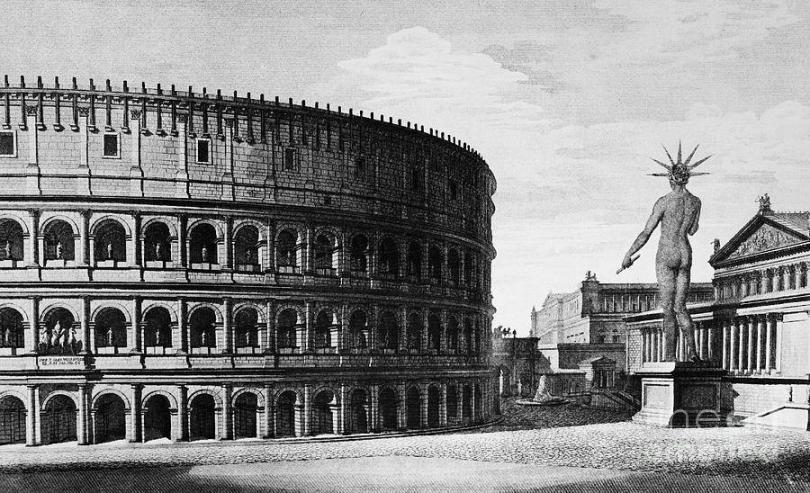