Mamertine Prison is an ancient prison, overlooking the Roman Forum. According to popular belief, the Apostles St. Peter & St. Paul were incarcerated by Emperor Nero here.

Mamertine Prison in Rome, Italy. According to the legendary tradition that Saints Peter and Paul were imprisoned there.

High-status prisoners were kept here. Jugurtha, king of Numidia in Africa, was brought to Rome as a captive by Sulla. He starved to death here in 106 BC. After Caesar’s conquest of Gaul, the Gallic leader Vercingetorix lived incarcerated here for some years before being paraded through the Forum in Caesar’s triumph in 46 BC. These are just some of the eminent names recorded on one of the plaques beside the entrance to the upper cell, while the other provides a list of the Christian martyrs.

It was built originally as a cistern by Ancus Martins, the fourth king of Rome, around 640 B.C. (according to historian Titus Livius). An inscription on the front records that the building was restored in the 1st century A.D.

The lower dungeon excavated it out of the solid rock in 578 B.C. (according to Roman Writer Marcus Terentius Varro). It was then believed to have a healing property and used to baptize prisoners & guards in the prison.

Inside the Mamertine Prison

The altar in the lower chamber.

There are plaques on which names of the martyrs are listed. There is also an altar with the busts of the Apostles Peter & Paul who were incarcerated. It was decorated with an upside-down cross because St. Peter was crucified upside-down there in 64 A.D.

Plaque in Mamertine Prison – with the names of illustrious prisoners who were locked up.

Twelve feet underground, there was a lower secret room of the jail. It was known as Tullianum, named after Servius Tullius who was the builder of it. This ancient prison consisted of two subterranean dungeons, one below the other, with only one round aperture in the center of each vault, through which light, air, food, and men could pass. No other means of ventilation, drainage, or access existed. The walls of large stone blocks had rings fastened into them for securing the prisoners. Executions were made either by strangulation or starving to death. Dead bodies were dumped into the Tiber River via the sewer.

Looking into the cell where Saint Peter was imprisoned.

Other parts of the small building have been used by the Vatican to show remodelings of the prison and multimedia shows and a film on the life of St Peter. You can also visit the 16th-century Church of San Giuseppe dei Falegnami: Giacomo Della Porta designed and built the church in 1538, which is the ‘Carpenters’ Church’ and so is dedicated to St Joseph. In the oratory are four columns of jasper and some finely worked benches. 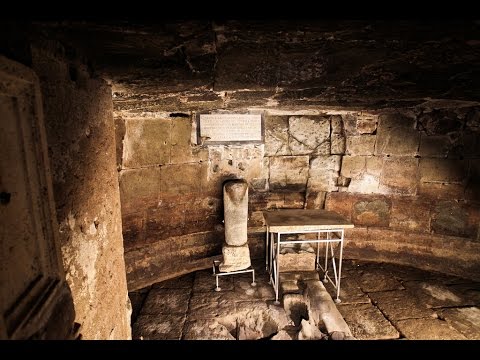 Tickets & Tours for your Visit: