Home » History » Seating in the Colosseum 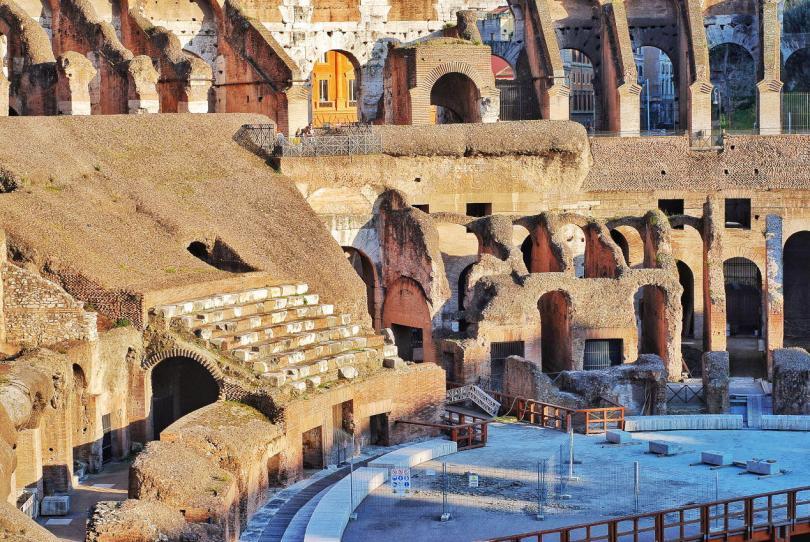 Since the games were public spectacles, entrance was free. However, people needed tickets. The entry tickets told them which entrance to use and where to sit. Each arched entrance had a number carved above it. The number was matched to the entry ticket.

The design of Colosseum was so clever that fifty thousand hurrying people could enter, show their entry tickets, and be seated in 15 minutes.

The stands were divided into sections according to precise social categories. Emperor Augustus carefully regulated the separation of the different classes at all public spectacles. 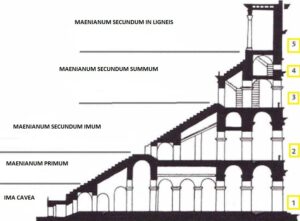 Colosseum, reconstructed section showing how the cavea was divided.

Sections of the Colosseum (Maeniaum) 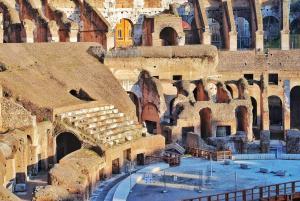 Flavian Amphitheater, interior. East section of the senatorial podium as reconstructed in the 1930’s. 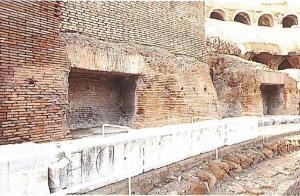 Flavian Amphitheater, interior. The service gallery and the inscription regarding the restoration of the stands in the middle of the fifth century A. D. Names of senators are carved on the other side 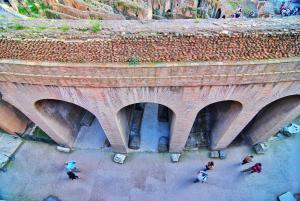 «Having been outraged by the insult to a senator who, at a crowded show in Puteoli, had not been offered a seat by anyone, [Augustus] ordered regulations to prevent the disorderly and haphazard distribution of seats. He had a senatorial decree issued providing that at every public performance the front row of seats be reserved for senators. He separated soldiers from civilians. He assigned special seats to married commoners and a special section to boys not yet come of age, as well as one to their tutors nearby. He banned badly dressed spectators from the best seats, and confined women to the highest rows, whereas they had previously sat together with men.
He assigned a separate section, facing the praetor’s box, to the Vestal Virgins. He did not allow any women at all to watch athletic contests. Indeed, when the crowd called for a boxing match during the Pontifical Games he postponed it until the following morning, and he issued an edict announcing that he did not want women to go to the theater before ten o‘clock»
(Suetonius, August, 44, 3-4).