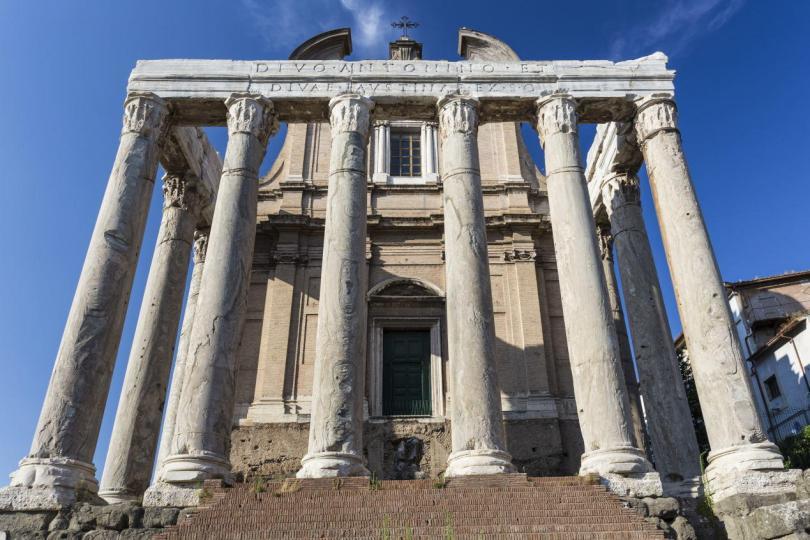 The great temple above which the church of San Lorenzo in Miranda was built in the seventh and eighth centuries has been identified with a fair degree of certainty from the dedicatory inscription still legible on the architrave.

Rome, Temple of Antoninus and Faustina, in the archaeological site of the Imperial Forums 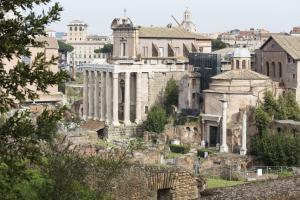 The Temple of Antoninus and Faustina was erected in 141 AD in honour of Faustina, the wife of Antoninus Pius, deified after her death. Twenty years later, on the death of the emperor, the first line was added to the inscription, so that the temple was rededicated to both husband and wife. The building stands on a tall plinth preceded by a flight of brick steps, rebuilt in modern times, which has incorporated the ancient core, also made of brick.

Temple of Antoninus and Faustina was a small marble building and was the scat of the College of Priests (called Pontifices), who met under the presidency of the Pontifex Maximus, the chief religious authority of the Roman State. Here were drawn up the calendar and the official lists of consuls and of the holders of triumphs; here the rules were fixed that governed sacrifices at altars and temples, and here were decreed the punishments for crimes against religion. All of these activities were recorded in written form in the famous Books of the Pontifices.

Like other monuments in the Forum, the Temple of Antoninus and Faustina risked being dismantled in the sixteenth century when the marble slabs with which it was sheathed were removed.

The columns, however, withstood the workmen’s efforts. Still visible are the deep grooves scored in the tops of the shafts by ropes used in the attempt to topple them.The frieze of winged griffins, candelabras, and vegetative motifs that adorns the entablature is considered to be one of the outstanding works of Roman art.The flower beds of different shapes and sizes to the east of the temple reproduce the forms of the tombs of the archaic burial place (Bronze Age, tenth-eighth centuries BC) discovered early last century.

Distance to the Roman Colosseum

Temple of Antoninus and Faustina set in Roman Forum, 0,55 km from (7 min walk) from Colosseum.