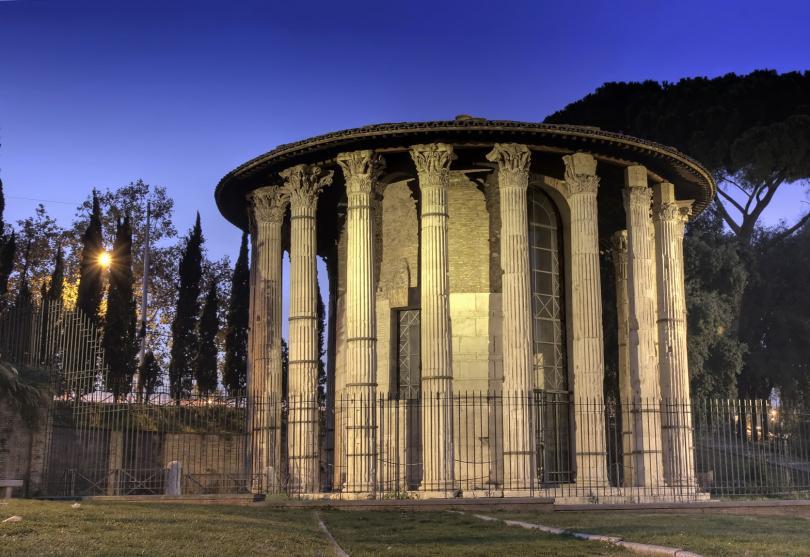 The Forum Boarium was one of the oldest and most important marketplaces of ancient Rome. In archaic times the plain grew into an important trading center, above all for goods arriving by water, with thriving cattle and vegetable markets, the Forum Boarium.

The river port of Rome consisted of a long series of wharves along the bank of the Tiber and numerous warehouses behind them, grouped around an area that corresponds more or less closely with that known as the Forum Boarium, around the circular and rectangular temples. 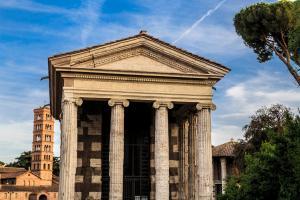 Temple of Portunus in the Forum Boarium (Rome, Italy).

In Forum Boarium, even before the foundation of Rome, there had been an active market between the Latin and Sabine villages on the left bank and the Etruscan villages on the right, who made use of the Tiber island as the easiest place for ferrying beasts across, and who met on the meadows below the Aventine, the Palatine, and the Campidoglio to assemble their flocks and herds. This is where the most important transport routes of central Italy crossed: the Tiber, which was then navigable from its mouth up to Orte, and the north-south land route from Etruria to Campania.

The Forum Boarium, covering most of the plain between the Tiber and the Capitol, Palatine, and Aventine, contains two exceptionally well-preserved little temples in what is now Piazza Bocca della Verita. The Temple of Fortune, actually identified as the Temple of Portunus (an ancient tutelary God of Rome’s first trading port, the Portus Tiberinus, on the bend in the river), was erected in the early monarchical period and rebuilt a number of times by the first century AD. 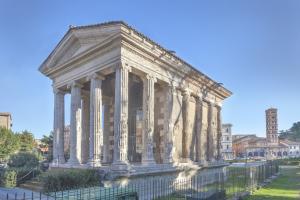 The temple stands on a dry-stone plinth. The elevation is entirely made out of Anio tufa, except for the columns and capitals which are of travertine. The cornice is original and bears lion protomes. The so-called Temple of Vesta nearby is wholly made of Greek marble from Mount Pentelicus. Erected by a wealthy Roman oil merchant, it was in fact dedicated to Hercules, the patron of oil sellers. 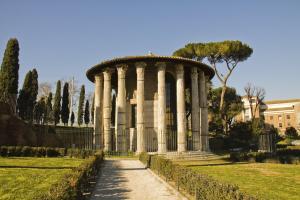 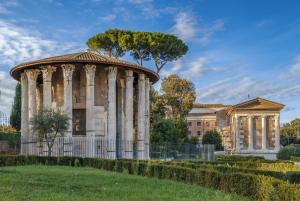 The Temple of Hercules Victor (Hercules the Winner) is an ancient edifice located in the area of the Forum Boarium close to the Tiber in Rome, Italy.

Ancient records refer to it as the Temple of Hercules Victor. It stands on a stepped stone base, with a ring of twenty Corinthian columns encircling a cell with the entrance on the east side. It seems to have been the work of Hermodorus, a Greek architect from Salamis active in Rome in the later second century BC.

Archaeological excavations in the 19th – 20th centuries in the area of the Forum at the foot of this hill towards the Tiber brought to light very interesting artifacts dating from the Bronze Age.

Ruins of hut houses of the 9th–8th centuries BC, similar to those on the Palatine, were discovered and the archaeological evidence has thrown brand-new light on the origins of Rome and the presence of the Etruscans here in the 7th and 6th centuries BC.

Tours & Tickets for your Trip: