Baths of Caracalla (Thermae Antoninianae – Terme di Caracalla) are the best-preserved baths in Rome. Hosting as many as 10,000 people at once, they were started by emperor Septimius Severus in A.D. 206 and mostly completed by his son, Caracalla between 211 and 216. Water was piped from a special offshoot of the Aqua Marcia known as the Aqua Antoniniana, piped to the baths across the Appian Way not far from Porta San Sebastiana.

Caracalla’s Baths were not the largest in Rome— Diocletian’s were bigger —but they were by far the most luxurious. There were rooms for cold, hot, and warm baths, splendid ceilings, porticoes, pillared halls, gymnasiums, where the rarest marbles, the most colossal columns, the finest statues were admired by the people; even the baths were oi basalt, granite, alabaster. Here, the Romans took their baths in hot and cold pools (caldarium and frigidarium) as well as in dry or wet steam baths, and also performed gymnastics and other sports. It had pools, 2 gymnasiums, libraries, and gardens, and could accommodate more than 1.600 people.

With an audio guideline, you can explore all 25 hectares of what's now the best-preserved ancient bathing area in the city. Imagine the tinted marble, repainted stuccos, mosaics, glass and […] 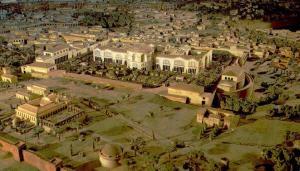 the reconstruction of the enormous complex with, below, the Via Ardeatina and the Aurelian Walls. 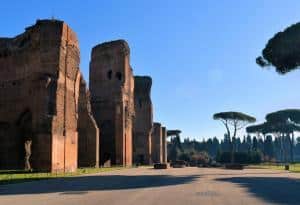 Remains of Rome’s most luxurious Baths of Caracalla – Rome. Roman citizens had free access to the baths, which could accommodate some 1.600 bathers at a time. 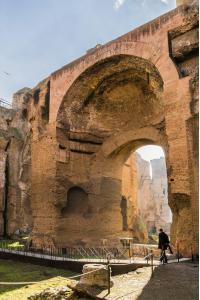 Ruins of the Baths of Caracalla (Terme di Caracalla). These were one of the most important baths of Rome at the time of the Roman Empire. 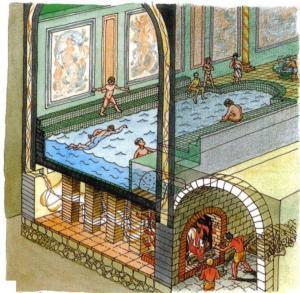 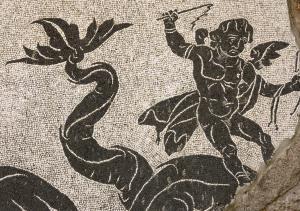 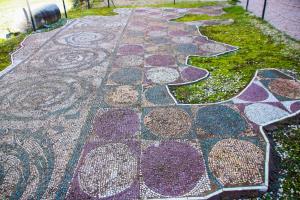 Mosaic floor of Caracalla baths, majestic archaeological site in Rome, Italy. Rooms were decorated by mosaics, frescoes, and statues. Small parts of these decorations are now displayed at the Vatican Museums, Piazza Farnese (two granite basins), and the Archaeological Museum in Naples. 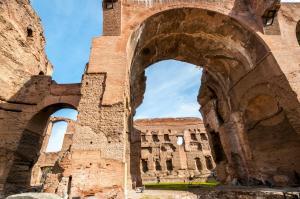 The baths of Caracalla in Rome, Italy 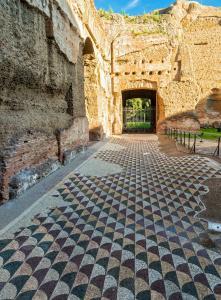 The various needs of users were met on a total area of 33,000 sq m.ft in overwhelming architecture: huge halls with massive piers and columns, domes and half-domes, barrel vaults, and cross vaults accommodated up to 1,500- 1,600 people at once. The floors and walls were decorated with sumptuous marble as well as extravagant mosaics and frescoes. Nowhere else was such a structure built for the luxurious pursuit of leisure.

Baths of Caracalla ceased to function in 537 A.D when the Goths blocked the aqueducts and cut off the water supply. After that in 847 A.D, an earthquake brought down some parts of the building. In the Middle Ages, the ruins became a quarry for marbles and other materials (there were 100 tons of iron in the vaults alone). The baths suffered their worst damage via Pope Paul III (1534-1549), who released them as a quarry for the rebuilding of St. Peter’s Basilica.

Although the acoustics are not perfect, a visit to the caldarium on warm summer evenings, when it is turned into an opera stage, is an unforgettable experience. Baths of Caracalla are surrounded by a lovely enclosed garden, planted with pines, laurels and cypresses, and low box hedges, which succeeds in isolating the spot totally from the noise of the busy roads all around it.

Baths of Caracalla Hours: Daily from 9 am until 1 hour before sunset.

3d Video Model of the Baths: