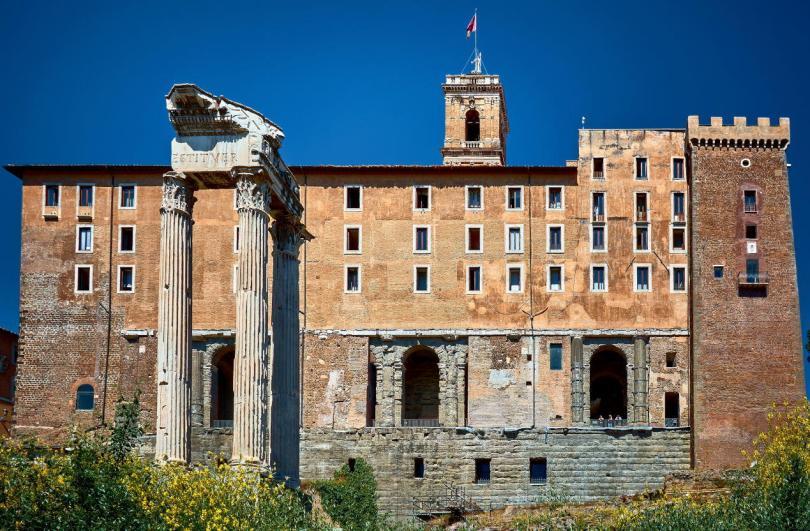 The Tabularium was erected by Q. Lutatius Catulus in 78 B.C. The bronze tablets of laws and decrees are kept here. The Tabularium derives its name from bronze tabulae. Laws and official acts were engraved on these tablets. It is one of the few remains of the Republican era.

From the Tabularium we have a glorious view of the most celebrated spot of ancient Rome: stupendous temples, triumphal arches, monuments of every sort.

Tabularium began to be constructed after the fire that destroyed the Temple of Jupiter Optimus Maximus in 83 BC. After the fire, the reconstruction of the big temple was entrusted to Quintus Lutatius Catulus (149–87 BC). He completed his job during his censorship, in 65 BC. During these years, Lucius Cornelius, recorded in a funerary inscription, probably helped him. Indeed, Lucius was the prefect and the architect in the years of the consulship of Lutatius Catulus. 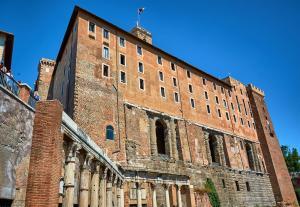 View of the façade of the building from below at the Roman Forum, Rome. 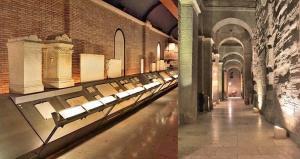 Judging from the remains of the preexisting buildings, it seems that the Tabularium substantially modified the slopes of the hill through the construction of a unique, solid retaining wall for this rise, clayey in nature. Thus, the bulk of the Tabularium is composed of foundation structures that create terracing along the slope of the hill. One could pass through the building to the Roman Forum by means of a steep staircase. From the Tabularium we have a glorious view of the most celebrated spot of ancient Rome: stupendous temples, triumphal arches, monuments of every sort. 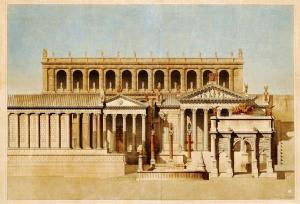 View on the Forum Romanum in ancient Rome – from left; Temple of Saturn, Temple of Vespasian, Rostra, Temple of Concord, Arch of Septimius Severus and Tabularium in background. 1866 – Constant Moyaux (1835-1911).

In spite of the size and the importance of the construction, this building is not recorded in literary sources. Direct analysis of the remaining structures provides only information about the building. Interpretation is difficult because the building remained always in use. In the Roman period, maybe Flavian-Trajanic, the Tabularium underwent a thorough systematization. At this time, a hydraulic conduit was installed in the lower gallery, and the staircase leading toward the Forum was abandoned. Simultaneously, a masonry vault was inserted in the Temple of Veiovis. 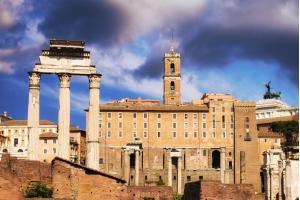 The facade facing on the Roman Forum, 73 met. long, consists of a row of ten arches framed by Doric engaged columns behind which is a gallery divided into rooms covered with cloister vaults. Initially, it had a 2nd story with a porticoed exterior of Corinthian columns. Inside the base is a long passage that has 6 windows that face out on the Roman Forum.

In the periods following the Roman era, it seems that predators and quarrymen did not destroy the building. In fact, they destroyed other buildings on the hill, whereas the Tabularium was inhabited and fortified. In the Middle Ages one of the powerful Roman baronial families, the Corsi, built a fortress here using the remains of the ancient Tabularium and the Temple of Veiovis as a foundation. The medieval building, with four towers, was restored over time. 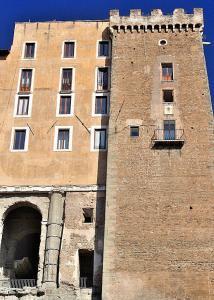 Efforts by Romans to have their own civic government were repeatedly thwarted by the popes, and their one-time scheme to elect 11 municipal senators was reduced to one senator—of the pope’s choosing. In 12. century A.D., when the Romans rebelled against the Pope and imagined bring back Rome to its former glory, albeit only in the city and its environments, they chose the imposing ruins of the Tabularium as the site for a rebuilt Palazzo Senatorio (Senate). Later the Palazzo Senatorio was built on top of it. This palace was the meeting place of the Roman Senate, constituted in 1144, and residence of its symbolic leader, the Senator.

The palazzo has served as the seat of Rome’s civic administration since the 12th century. It is another example of Rome’s many-layered history—the facade conceals an earlier medieval fortress built on the vaulted walls of the first-century BC Tabularium.

In 1551 Michelangelo was commissioned by Pope Paul III to transform the entire square and remodel the façade of the palace. His plans were carried out by Giacomo della Porta, Girolamo Rainaldi, and Carlo Rainaldi in 1582-1605. Today the mayor’s office and other administrative offices are housed here. Since a 1986 earthquake, the bell tower leans 20 inches to one side. 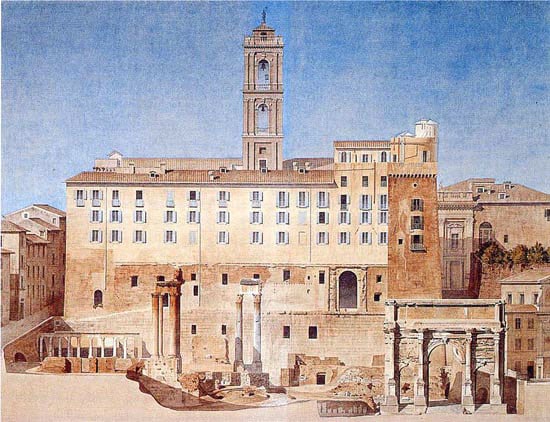 The Palazzo Senatorio was enlarged and modified during the course of the following centuries. Various rooms dating to the Roman period were used in different ways according to necessity. Until the seventeenth century, they housed the usalara of the Capitoline Hill, kitchens, stables, services for the Senator, and prisons for those awaiting the judgment of the senatorial tribunal.

The Palazzo Senatorio was still standing when papal rule lastly finished in 1870. The Palazzo then turned into and still is, the seat of the Mayor of Rome. So, in a restricted sense, the Capitoline remains to be an icon of ruling power in Eternal City. 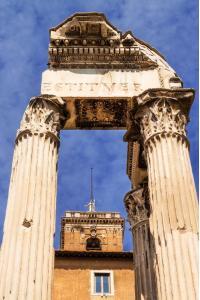 The building peeking through the columns of the Temple of Vespasian and Titus, Roman Forum, Italy

The building set in Via di S. Pietro in Carcere, 1,1 km from (14 min walk) from Colosseum.