Farnese Palace (Palazzo Farnese in Italian language) is the most magnificent Renaissance palace in Rome. Cardinal Alessandro Farnese, who later became Pope Paul III (1534-1549), commissioned Antonio da Sangallo the Younger to build it. After his death, the work was continued by Michelangelo from 1546 to 1549; Giacomo della Porta finished the task in 1589 with the rear of the building.

The Palazzo Farnese was expensive to maintain, and so Cardinal Odoardo Farnese’s heirs deserted it after he died in 1626. In 1635, a deal was struck that gave the building to the French Embassy in exchange for an Italian Embassy building in Paris. It has been the seat of the French Embassy since 1874. 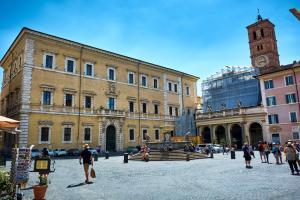 The majestic, massively cuboid composition of the exterior with its restrained geometric forms is impressive. The three distinct storeys of the facade are almost entirely dominated by windows. These rows of windows, each with a different type of frame, the entrance and the centre window on the first floor combine so harmoniously that nothing can be added or taken away without reducing the perfection of the whole. The courtyard follows an ancient architectural pattern, in which the columns and pilasters of the first storey are Doric, those in the second storey are Ionic, and those in the third are Corinthian.

“The Loves of the Gods” painted by Annibale Carracci in Farnese Palace – Palazzo Farnese.

A highlight on the first floor, is the long gallery with the frescoes The Loves of the Gods painted by Annibale Carracci between 1597 and 1604.

Although it is closed to the public, you can arrange a visit by writing several months in advance to the Cultural Service of the French Embassy, Piazza Farnese, 00186 Rome. Piazza Farnese (between Via del Mascherone and Via del Farnesi). Tel: 686011 ; Fax: 68601331