According to legend, a heavily-laden ship once sank in the place that is now Tiber Island (Isola Tiberina). And in truth the 300m long island has the appearance of a gigantic ship in the current – in republican times it was even topped by a mast-like obelisk.

The great embankment wall built round the island gave it the appearance of a boat; and a small obelisk in the centre, like a mast, accentuated this. In 291 B.C. a Temple of Aesculapius was established there and after that the whole island acquired a sacred character, although it was always considered to be strictly outside the city proper.

The Temple, dedicated to the god of medicine, was surrounded by porticoes which provided shelter for the sick pilgrims who came to be cured. This is a function that the island has in effect retained, for precisely on the site of the ancient temple there now stands a modern hospital. (Fate Bene Fratelli Hospital. It was established in 1585.)

Towards the end of the Roman Republic the island was linked to the land by two bridges. The Ponte Fabricio (Pons Fabricius), leading to the left bank, was built in 62 B.C., probably to replace an earlier wooden structure, and it is still completely preserved. The contemporary Pons Cestius, leading to the right bank, was entirely rebuilt in A.D. 365 by the Emperor Valentinian I. 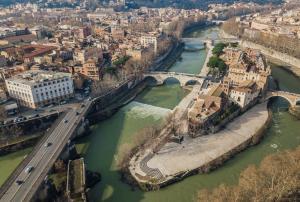 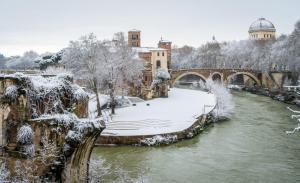 Snow in Rome -Tiberina Island in the morning, Italy. 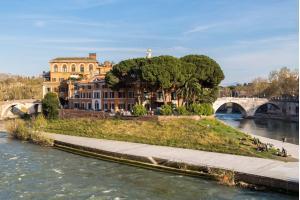 Thanks to the island, this was the most convenient place to build bridges across the river. In 62 BC, consul Fabricius connected the island with the right bank of the Tiber; today, it is the oldest surviving bridge in Rome. It bears his name but is also called the »Bridge of Four Heads« because of the two double Hermes heads on the parapet. 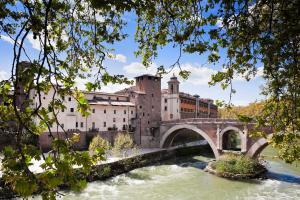 The church in the centre of the island was built over the ruins of the Temple of Aesculapius in the late 10th century under Holy Roman Emperor Otto III, and was restored by Martino Longhi the Younger in the Baroque period after it was flooded by the Tiber.

Notable features of the church are the beautiful Roman campanile, which represents the mast of the »ship«, and a lavishly decorated 12th-century marble fountain at the approach to the apse which shows Christ, saints Adalbert of Prague and Bartholomew, and Otto III. 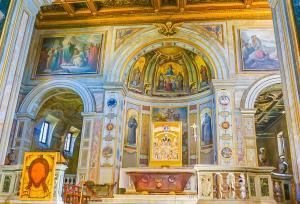 The Interior of the Basilica of San Bartolomeo all’Isola on Tiber Island . 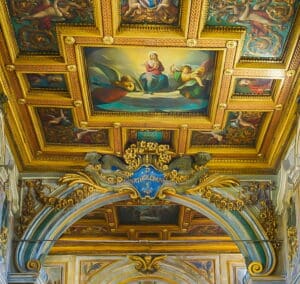 The Ponte Cestio, constructed in 46 BC by Lucius Cestius and renovated by various emperors, leads across to Trastevere.

»Destroyed bridge« is the name given to the downstream remains of a bridge begun in wood by the Roman censors Emilius Lepidus – hence its former name Pons Aemilius – and Fulvius Nobilior in 179 BC; it later had 142 stone arches, the first of this kind in Rome. 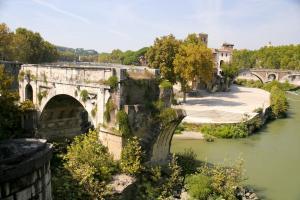 The remains of the ancient Ponte Rotto, with Isola Tiberina (Tevere Island) in the background, Rome, Italy.