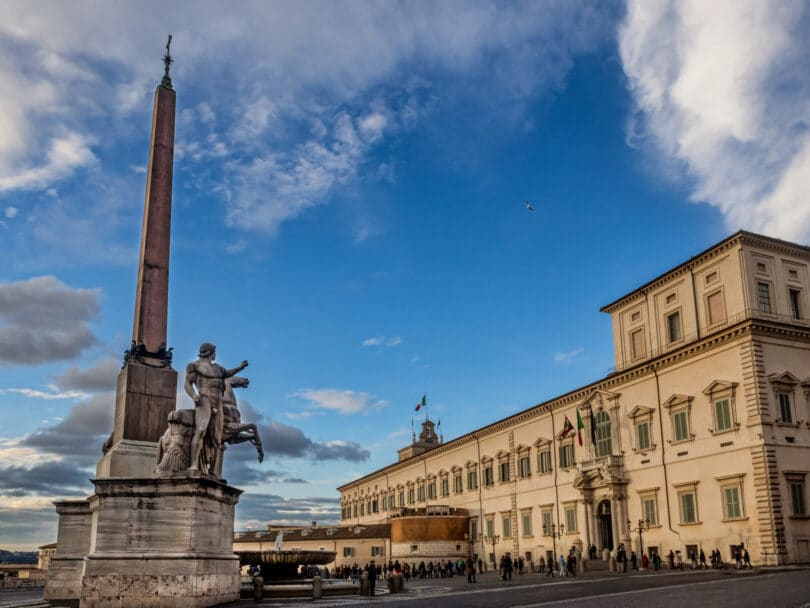 The Piazza del Quirinale in front of the main entrance to the Quirinal Palace is among the most beautiful in Rome. The square occupies the summit of the Quirinal, the highest of the Seven Hills. Piazza del Quirinale received its name from a Temple of Quirinus, or from Cures, an ancient Sabine town north eastern of Rome from which, according to legend, the Sabines under their king Tatius settled on the hill. The name of Quirinus was a title of Romulus, after he had been deified; the festival in his honour was called Ouirinalia.

It offers a panoramic view over the city all the way to St Peter’s Basilica in the Vatican. The large Dioscuri Fountain with a 14m/46ft-high obelisk which once adorned the entrance to the Mausoleum of Augustus, and the almost 6m/ 20ft-high figures of the horse tamers Castor and Pollux from the nearby Baths of Constantine, occupy the centre of the piazza. They are Roman copies, dating from the Imperial era, of Greek originals of the 5th century B.C. 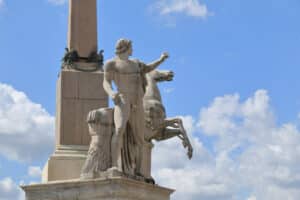 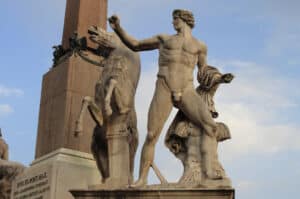 Statue of Dioscuri located in Quirinale square of Rome, Italy

In Roman times the Quirinal hill, which is linked to Romulus in legend, accommodated an entire quarter of the city with residences for the wealthy. At the wish of Pope Gregory XIII, a papal summer residence was built here. It was begun in 1574 and gradually enlarged by such illustrious architects as Fontana, Maderno and Bernini until finally, under Clement XII (1730-1740), it formed a huge complex of buildings and gardens.

The Quirinal Palace was the habitual summer palace for the popes. Pope Sixtus V died here in 1590; many official ceremonies have taken place and occasional conclaves have been held in it. From this palace Pope Pius VII issued as the prisoner of Napoleon, and from its balcony Pius IX blessed Italy at the beginning of his pontificate. From 1870 to 1946 it was the royal residence. Victor Emmanuel II died here on 9 January 1878. Today the Italian state president has his offices here. 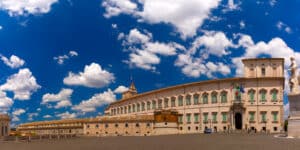 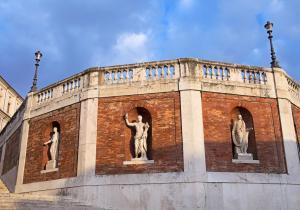 Wall with antique statues around The Quirinal Palace – the current official residence of the President of the Italian Republic. It is located on the Quirinal Hill, Rome, Italy

The magnificent palazzo opposite was built in 1734 under Pope Clement XII by Ferdinando Fuga for the papal court (Tribunale della Sacra Consulta). Today it is the seat of the constitutional court, the Corte Costituzionale. 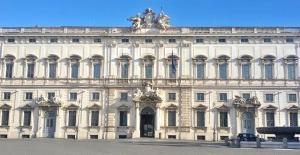 Via del Quirinale is the site of Sant’Andrea al Quirinale, built by Bernini in 1658-1671 for Cardinal Camillo Pamphili to serve as the college of the Jesuit order. The church is a counterpoint to the chapel San Carlo alle Quattro Fontane just a few meters away, a work of Bernini’s competitor Borromini. 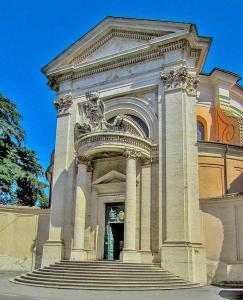 The church, which is perfect both in its ingenious architecture and its magnificent decoration, was the court chapel of the Italian royal family from 1870 to 1946. In the spirit of Baroque design, Bernini’s ground plan replaced the circle which would have been used in the Renaissance period with an oval, extended by eight side chapels and placed laterally. 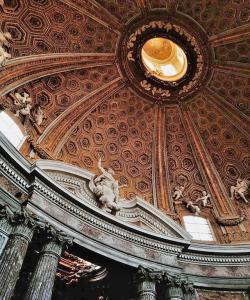 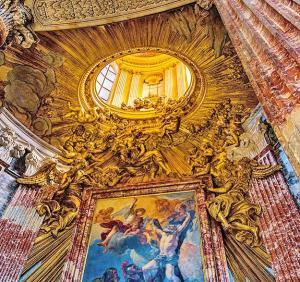 This, in accordance with the Baroque feeling for space, transforms the balanced symmetry of the circle into movement. The decoration with pilasters and friezes, arches and coffered domes, cornices and windows, frescoes, marble and stucco in stately pink, white and gold matches the liveliness of the architecture.

The church San Carlo aile Quattro Fontane, begun in 1638 by Borromini, is just a few paces away. It took its name from the four fountains with recumbent personifications of the Tiber and Aniene, loyalty and Bravery. 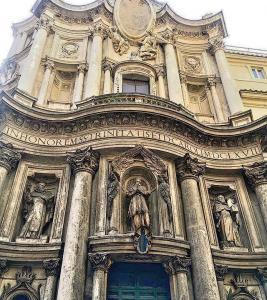 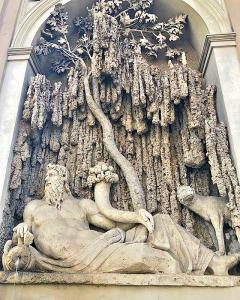 The two-storey Baroque façade, behind which is an elongated oval space, has an elaborate design vocabulary of columns, niches and a portal flanked by two angels. Borromini, who died in 1667 shortly before the façade was completed, combined convex and concave lines in a masterly fashion and played skilfully with the harmony and dissonance, the symmetry and asymmetry of the forms. 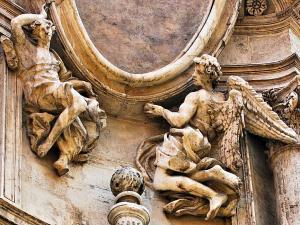 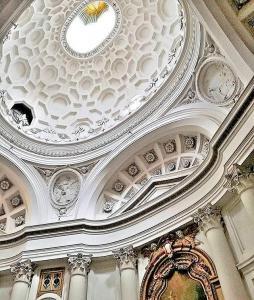