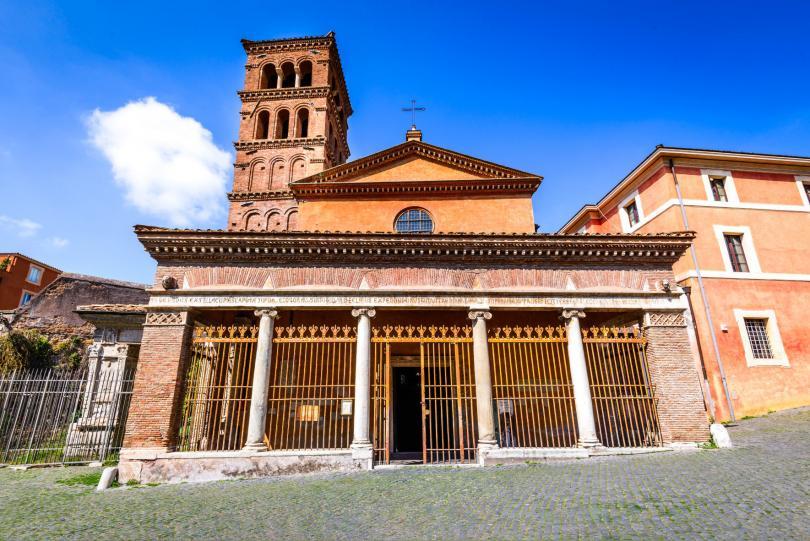 The name Velabro identifies the marshy river site where, according to legend, the twins Romulus and Remus were found. It was crossed by boats until Marcus Agrippa and Emperor Aurelian built a wall to confine the river. It is still subject to floods when the river is exceptionally high, and there is a mark in the church porch showing the extent of the last flood.

Near the edge of the marsh stood the house of Titus Sempronius and in the fourth century a church was built nearby and named the Basilica Sempronia. In the seventh century Pope St Leo II (682-683) restored the old church and dedicated it to St Sebastian; Pope Zachary (741-752) added St George as jointpatron.

The second church was built on the orders of Pope Gregory IV (827-844). The campanile and portico were added in the 12th century. San Giorgio in Velabro, restored after a bomb blast in 1993. The church’s elegant beauty made it popular for Roman weddings before the bombing. San Giorgio in Velabro is situated near the Arch of Janus or Quadriferous Arch of the Money Changers. 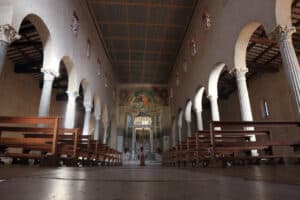 San Giorgio in Velabro church interior, located at the ancient Roman Velabrum in the rione of Ripa.

The nave is divided from the aisles by 24 ancient columns; twenty of these are of granite and four of pavonazzo, all in varying shades of grey. All have been taken from some pagan building and so are of different types and are placed directly on the floor without bases. The capitals are Ionic and Corinthian and the arcades over them are not uniform. 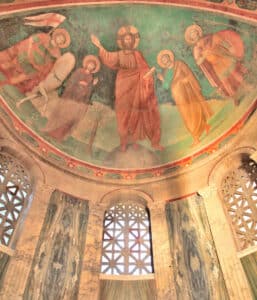 The Arco degli Argentari – Arch of the Money Changers

The Arco degli Argentari (Arch of the Money Changers) is next to the chapel. It was erected by merchants and bankers from the Forum Boarium in honour of Emperor Septimius Severus and his wife Julia Dona as well as their sons Caracalla and Geta, and was later incorporated in the church San Giorgio in Velabro. The reliefs, some of which are well preserved, depict the imperial family at sacrifice and captured barbarians. 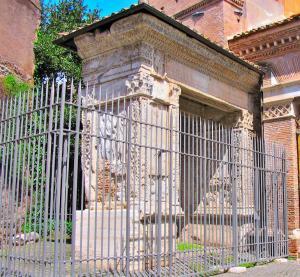 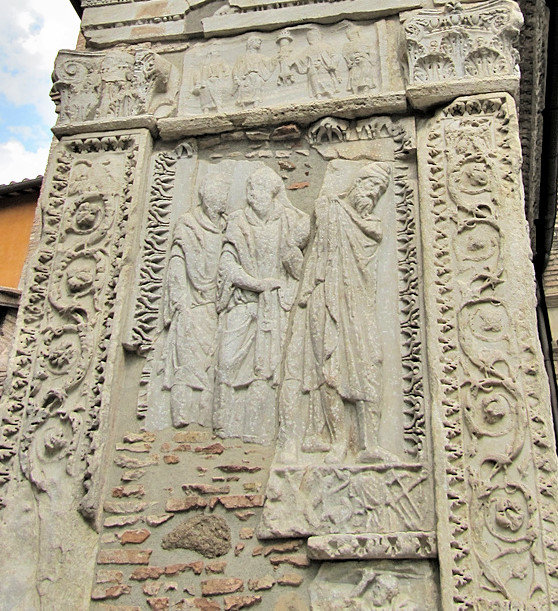 The marble »Arch of Janus« (Ianus Quadrifrons) in front of the church in the middle of Via del Velabro was long mistaken for part of a temple of Janus. However, it served as a covered intersection (janus) with four directions (quadrifrons) at a busy place in the commercial district of ancient Rome. It was built with stones taken from other structures during the reign of Constantine. 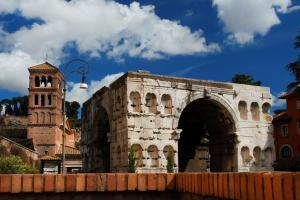 Arch of Janus with clouds in the historic center of Rome.

Colosseum to San Giorgio in Velabro: